Will there ever be a solution to the refugee crisis?

Responses to the migration crisis are becoming increasingly diverse as governments turn a blind eye to the Syrian refugee and other crises. 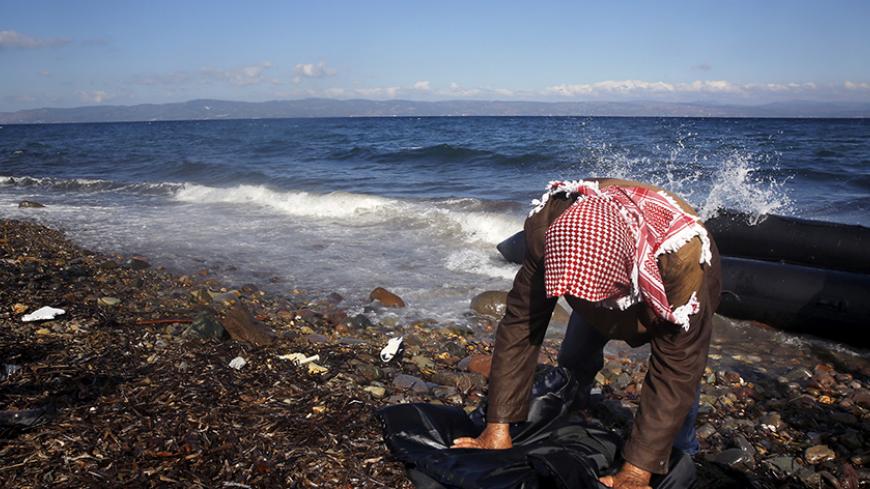 An exhausted Syrian refugee is seen moments after arriving by raft at a beach on the Greek island of Lesbos, Oct. 25, 2015. - REUTERS/Yannis Behrakis

Cairo — On Oct. 10, at least 10 people reportedly drowned off Egypt’s Mediterranean coast as they tried to reach Italy by boat. Ten bodies were recovered from the water, including four Egyptian teenagers from the Nile Delta, while 10 more bodies may simply have disappeared at sea.

The news may have just announced the tail end of the peak season for irregular migration in the Mediterranean, when deteriorating weather and smugglers conscious of dwindling time put migrants’ lives at added risk.

And yet this has been happening all year, replicated on beaches and coastlines around Europe’s southern and eastern borders. In total, the International Organization for Migration estimated in October more than 3,000 people have died trying to reach Europe in 2015.

Border deaths like these raise questions about responses to the migration crisis, which have ranged from a wave of grass-roots volunteerism across mainland Europe to the philanthropism of billionaires.

But they also form part of a growing discussion that the scenes in Turkey, Greece, the Balkans and off the coast of Libya this high season were not some one-off phenomenon, but the early signs of a historic period of human migration — a crisis with no foreseeable end in sight, the “new normal.”

Sherif Elsayed-Ali, head of Refugee and Migrants' Rights at Amnesty International in London, acknowledges that with complex roots — like the Syrian conflict, with its surrounding power plays and negotiations — the story of Mediterranean migration will not go away with the coming winter.

The European Commission remains positive about its efforts, despite drawing widespread criticism since January as the crisis has spiraled, and still does.

A spokesman for the commission told Al-Monitor on condition of anonymity that it had “prioritized this issue since [taking] office in November 2014 and presented a number of proposals for comprehensively tackling the situation.”

On Oct. 12, Amnesty International proposed an eight-point plan to address the migration crisis, recommending “continuous, sufficient and predictable funding for refugee crises,” continued and robust search-and-rescue at sea, as well as resettlement quotas according to UNHCR's estimates, which suggest that 1.15 million vulnerable refugees currently need resettlement.

At the same time, responses to the migration crisis are becoming increasingly diverse.

Eric Maddox, creator of the Virtual Dinner Guest Project, an international multimedia initiative aimed at connecting communities through food, conversation and videoconferencing, founded a Facebook page — Refugee Relief Action Forum: Europe-MENA — in response to the growing need of refugees in the Middle East and North Africa, as well as those crossing over to Europe. The page is aimed at coordinating efforts on the ground and helping those in need.

Maddox told Al-Monitor the main aim is to “connect disparate … geographically dispersed elements and give people a space to post their stuff — like, ‘These are our needs’ or ‘I’m a person willing to help, how can I be most useful?’” As such, the page has been used by volunteers and Syrians hoping to reach Europe.

But why is it necessary? “We’ve seen that the formal, governmental or international institutional responses come up short, and in too many cases, the formal governmental responses have been inadequate,” Maddox told Al-Monitor. “There are already people on the ground doing stuff [and] there are already people who’ve set up Facebook groups locally to coordinate efforts, whether in Greece or elsewhere. But are they coordinating with each other? Connecting them through social media appears to be a logical next step.”

Some of those recent local efforts have included volunteers welcoming refugees with clothing and food as they arrive on beaches in Greece. Croatian activists even carried around Wi-Fi hotspots as refugees made their journey through the country toward Northern Europe.

In stark contrast to the grass-roots volunteerism and social media activism that has cropped up in response to the migration crisis, wealthy philanthropists are also stepping forward with their own ideas and contributions.

Egyptian telecom tycoon Naguib Sawiris is said to be entering negotiations for a project he’d first proposed on Twitter, to establish a “refugee island” to host and employ refugees fleeing war and instability at home. The richest man in Egypt has said he would call the project “Aylan Island,” named after Aylan Kurdi, the Syrian-Kurdish toddler photographed drowned on a Turkish beach.

Sawiris has earmarked two islands off Greece as potential sites for the project.

According to a statement that Sawiris shared on his Twitter account, the businessman will go ahead with the purchase of the islands, provided the current owners can get approval from the Greek government “to host the maximum number of refugees allowable according to the Greek laws.”

Sawiris would not be the first person to take a bit of blue-sky thinking out of the boardroom and onto the front lines of the Mediterranean’s migration crisis.

Earlier this year, Israeli-American real estate mogul Jason Buzi proposed a “Refugee Nation,” which he said would create a space for tens of thousands of people rendered stateless worldwide to live and work in safety.

“We have a lot of stateless individuals all over the world right now," Buzi told The Washington Post in July. "The idea is, if we could give them a state of their own, at least they'd have a place to live in safety and be allowed to live and work like everybody else.”

However, some migration experts criticized the plan — as others have Sawiris’ Aylan Island — because, for example, it conflated stateless persons with refugees and built itself on exclusion rather than inclusion.

Writing in The Guardian in August, Alexander Betts, professor of refugee and forced migration studies and director of the University of Oxford’s Refugee Studies Centre, argued that ideas like Buzi’s “should not be totally dismissed.”

“The idea is most usefully deployed as a metaphor for creative thinking about the political geography of asylum. Rather than actually seeking one single territory in the world to house the world’s refugees, Refugee Nation should offer a source of inspiration for ways in which we can collectively reimagine and reinvigorate asylum,” Betts wrote. “Even if the current proposal is flawed, innovative and creative solutions to refugee challenges must be welcomed.”

As the peak migration season winds down into the winter months, discussions and preparations will be underway. However, Elsayed-Ali warns there is a risk that if “public scrutiny” subsides, the same old pattern of fraught crisis management may return.

“The worrying thing is that if the attention goes away again, governments will just ignore the issue again, until they have to deal with it because of public scrutiny.”