Is Turkey's plan to stop flow of refugees legal?

Turkey's offer to the European Union to stop the flow of refugees to Greece is compelling — but is it legal? 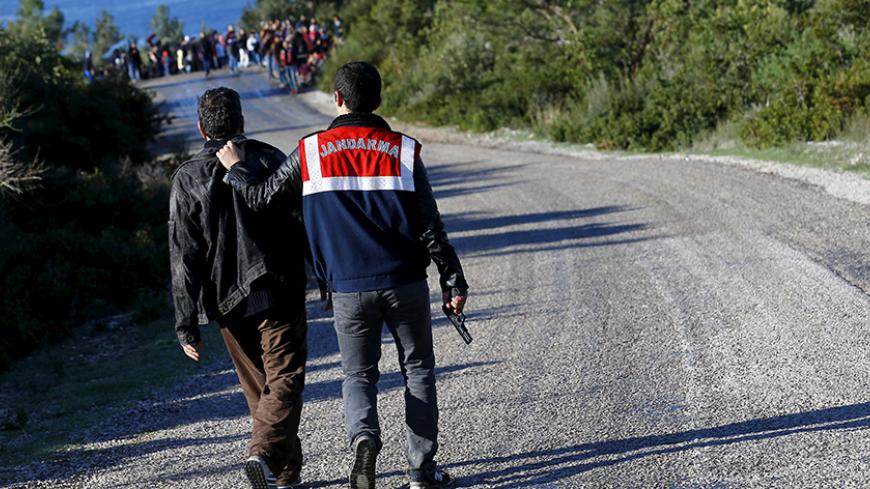 A Turkish gendarmerie officer detains a man believed to be a smuggler, as Syrian refugees who were prevented from sailing to the Greek island of Lesbos wait in the background, near a beach in the western Turkish coastal town of Dikili, March 5, 2016. - REUTERS/Umit Bektas

ANKARA, Turkey — The “captain” of the sunken boat was warming himself under a blanket when the Greek coast guard officers grabbed him. They marched him to where the corpses of three of his passengers lay.

The guards forced him to kneel down, and one said, “OK, look, eh!” The guards then revealed the faces of the drowned refugees — children ages 2-4 — to one of their fathers, asking him to identify his child.

The Sky News video did not catch the father’s reaction, but it caught the captain breaking down, trembling and sobbing loudly. Identified only as Ozkan A., a Turk, he had tried to take 23 refugees across the 5 kilometers (3.1 miles) of sea between Turkey and the Greek island of Samos.

Smugglers reportedly paid Ozkan $3,000 for every boatload of refugees. Greece charged him with manslaughter, smuggling refugees and causing a shipwreck. A Turkish newspaper found his father, who said his son was of subnormal intelligence.

This scene, filmed in January, captured the tragedy and exploitation of the migrant crisis. On March 7, Turkish Prime Minister Ahmet Davutoglu proposed to an EU summit a mechanism that could stop the flow of refugees across the Aegean. On March 17, the 28 European Union leaders will meet again in Brussels to give their answer.

If implemented, the mechanism would mean that Greece would promptly ship back to Turkey all the refugees that land on its beaches. The EU would accept an equal number of Syrian refugees waiting in Turkey for asylum in Europe. The refugees shipped back would go to the back of the asylum queue.

Greek Prime Minister Alexis Tsipras said Turkey’s proposal was “attractive” and it had taken the summit by surprise.

Under the mechanism, refugees would soon realize they gained nothing by crossing the sea to Greece because they were sent straight back to Turkey. That would put an end to the more than 2,000 people a day taking boats going to Greece, end the tragic drownings and put the smugglers out of business.

The flaw in this scheme is that it is illegal. To make it work, Greece would have to send back all those who land on its shores without regard to the merit of their individual claims for asylum.

Mass expulsion of migrants from Greece to Turkey would be illegal, the United Nations human rights chief, Zeid Ra'ad Al Hussein, told the media in Geneva on March 10.

However, the appeal of the mechanism remains. The head of the EU delegation to Turkey, Hansjorg Haber, told a seminar at the USAK Institute of International Strategic Research think tank in Ankara on March 11 that the EU Commission is currently in talks with the UN High Commissioner for Refugees (UNHCR) to find a way of making it compatible with international law.

“The purpose of the UN convention is to offer people security, not to give them the choice of a place of asylum,” Haber told the meeting Al-Monitor attended.

When it comes to providing the basics of security, Turkey has done quite well. It now hosts 2.5 million refugees, mostly Syrian. That equals more than 3% of its population, which might normally be a tipping point to unrest.

A survey of the German Marshall Fund found last year that 84% of Turks were “worried about” the Syrians, and 73% thought they should be “asked to go home.”

Yet despite such views, Turkey has not experienced major outbreaks of anti-immigrant violence. Tolerance is surprisingly high.

“The general approach of the government to the Syrians is positive and tolerant, and this influences the Turkish citizens’ approach,” political analyst Oytun Orhan told Al-Monitor.

Syrians also have a similar lifestyle, the same religion and are “historically close to Turks,” Orhan said. Syria was part of the Ottoman Empire, and many Turks in the border provinces have relatives in Syria.

A third reason is the Syrians are good guests. “The number of criminal cases in which refugees are directly involved is very low,” Orhan wrote in his 2015 report “Effects of the Syrian refugees on Turkey” for the ORSAM think tank in Ankara.

The harmony might be tested in the coming months when the government implements its decision to give work permits to the Syrians.

“Turkish workers get twice our salary,” said Ali Hussein Khater, who came to Turkey in 2013 with his wife and five children. Speaking in Ankara, Khater said the lack of a fair wage was his main complaint about Turkey.

“If I get a good job with good money, I will not go to Europe,” he said.

Harun Ozturkler, professor of econometrics at Kirikkale University, has advised the government that with work permits, the number of Syrians in the labor market will not be much more than the 1 million seeking work illegally at the moment. The main difference will be that employers will have to pay the Syrians higher wages, Ozturkler told Al-Monitor.

The work permits carry restrictions. A Syrian will have to work in the province where he first registered, and the Syrians cannot exceed 10% of a firm’s personnel total.

Orhan praises the quota as a measure to ensure that Syrians can work without seriously jeopardizing the jobs of Turks. Unskilled Turkish workers in construction and agriculture may well lose out to Syrians, but the number is not expected to be huge.

Were this to happen, such workers will be eligible for retraining at the Turkey Labor Institute to improve their ability to find work, Ali Gunes of the prime minister’s office told Al-Monitor in an email.

Nedim Tashish works as a Turkish-Arabic translator. A former teacher in Aleppo, Tashish came to Turkey in 2014 and learned Turkish at a language school. He was delighted when Turkey passed the regulation for work permits in January, but has been disappointed by their slow delivery.

“I don’t want to leave Turkey because Turks are very similar to us,” he told Al-Monitor, “but the government is not looking after us.”

His wife gave birth to a son in Turkey. “I have no proof that he is my son. There is no legal document. The state gives me only a foreigner identification document,” he said.

This raises what human rights groups regard as Turkey’s major failing for the refugees: It refuses to grant the status of refugee. Instead, the government classifies Syrians as “foreigners under temporary protection.”

Metin Corabatir, who retired from the UNHCR to set up the Research Center on Asylum and Migration think tank, told Al-Monitor that Turkey avoids conferring refugee status for fear of being seen as a “paradise for refugees.”

The consequence is that the refugees in Turkey have no legal protection, according to Human Rights Watch.

Moreover, the recognition is growing that most of the refugees will remain in Turkey. As Corabatir explained, the resettlement of 2.5 million people is not feasible. “Turkey has to live with the vast majority of these Syrians, so it is for the benefit of the country to give them [refugee] status and to integrate them.”

Ozturkler guesses that about 1.5 million of the Syrians, or 68%, will stay in Turkey even if peace returns to Syria. What is more, he wants them to stay.

“I don’t wish for them to go back to Syria,” said Ozturkler. “We are a very colorful society and they are going to add new colors to our society. If I were the prime minister, I would have done more to integrate [them].”