Turkish President Recep Tayyip Erdogan said border security would continue to stand down Monday as thousands of refugees and migrants attempt to enter Greece by land and sea. 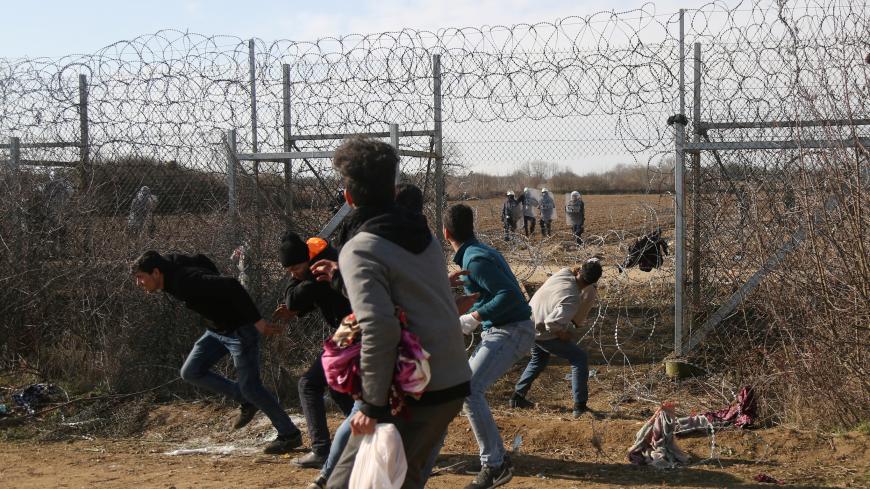 Since Friday's announcement at least 13,000 people have reached the land crossing, according to United Nations estimates, under the impression they could cross the border. Most have so far been stopped by Greek police, which requested the rapid deployment of the European Union’s border agency, Frontex, to help manage a sudden surge in attempts to enter the country.

Ali, a 24-year-old Syrian living in Turkey, was among the thousands of people at the border gate Saturday. Speaking while tending a campfire to keep his wife and six-month-old son warm, Ali said he was shocked to find the border closed when they arrived Friday evening.

“We were told the border was open,” Ali told Al-Monitor, sharing only his first name. “What are we supposed to do now? We did not bring anything. No food, no money, no place to sleep.”

The developments come as Erdogan seeks to pressure European Union officials over what he says is a lack of support for Ankara’s military operation against the Syrian government to stem an offensive in Idlib that has displaced about one million civilians since December.

On Monday, the Turkish leader doubled down on prior statements regarding border security, saying Ankara needs more support in managing the humanitarian crisis in northwest Syria and that Turkey has been carrying the “burden alone for nine years,” referring to the length of the Syrian war.

“Turkey will not close its border gates for refugees to cross into Europe anymore; it is a done deal,” Erdogan said Monday, warning millions of refugees might soon head out for Greece.

In recent days, Turkish officials have claimed large numbers of asylum seekers entered Europe, but Greek reports labelling such statements as "disinformation" claim security officials arrested about 150 people who entered the country informally over the weekend.

Greek islands near the Turkish coast also witnessed a spike in arrivals, with at least 1,000 people reaching Greek shores over the last 24 hours, according to local police. The death of one child was reported when a boat capsized in the Aegean Sea, while a separate incident along the land border resulted in the death of a young Syrian man Monday.

The situation shows few signs of ebbing as buses, vans and taxis continued dropping off hopeful asylum-seekers at border points between Turkey and Greece Monday. In response, Greek officials announced they would suspend asylum applications for a month.

Marian Karagyozov, the Turkey correspondent for Bulgarian National Radio, said few crossing attempts were reported along the Bulgarian border, where the situation remains stable. He also noted new arrivals at Greek border gates would likely camp out in the cold, awaiting an unlikely change in policy from Athens.

“I saw people in the city center of Edirne buying some food products, big bottles of water and other necessities, so I think they are expecting to stay in this border zone for a while,” Karagyozov told Al-Monitor.

Though journalists were initially allowed access to the Pazarkule border, Turkish security forces set up a roadblock Saturday evening, barring media organizations from approaching the gate as refugees and migrants continue to stream toward what has become a fast-growing encampment.

Meanwhile, media rights organizations report at least 10 journalists have been detained in Turkey while covering developments along the border. On the Greek island of Lesbos, at least one journalist was attacked by a group of vigilantes seeking to stem new migration flows.

Eva Cosse, a western Europe researcher for Human Rights Watch based in Athens, said groups of far-right vigilantes were taking matters into their own hands on the island and that church bells there were ringing nonstop Sunday, a traditional warning signal for a coming catastrophe.

“Vigilante groups stopped some boats from reaching the shores. They beat some journalists. One was taken to the hospital bleeding and they stopped a van with NGO workers and beat them near the airport on Lesbos,” Cosse told Al-Monitor.

She added that the same groups are believed to have set fire to a refugee facility on Lesbos and may be using speedboats to block incoming asylum-seekers in the Aegean Sea for the first time in years.

The developments raise questions over the sustainability of a 2016 migration accord that aimed to stop informal border crossings from Turkey in exchange for six billion euros in EU funding to support the nearly four million refugees living in Turkey.

“With the situation now, the migration deal is off the table,” Cosse told Al-Monitor, adding, “The Greek coast guard said they had identified boats in Turkish waters and were calling the Turkish coast guard, but they were not responding.”

High level meetings in the coming week will shape events moving forward. Erdogan is scheduled to meet with Russian President Vladimir Putin on March 5 to discuss operations in Idlib.

In the meantime, asylum seekers faced with heightened security measures on the Greek land border are expected to increasingly seek out water routes to Greece, said Fabrice Balanche, an associate professor at the University of Lyon 2 and adjunct fellow at The Washington Institute.

“It’s blackmail,” Balanche told Al-Monitor. “[Erdogan] is using the refugees to get political and financial support in Syria.”

He added, “Europe is in a very sensitive situation. If you have one million new refugees arrive now, the unity of Europe is broken.”