Critics say the United States should accept 65,000 Syrian refugees by the end of next year, but the numbers are likely to fall far short. 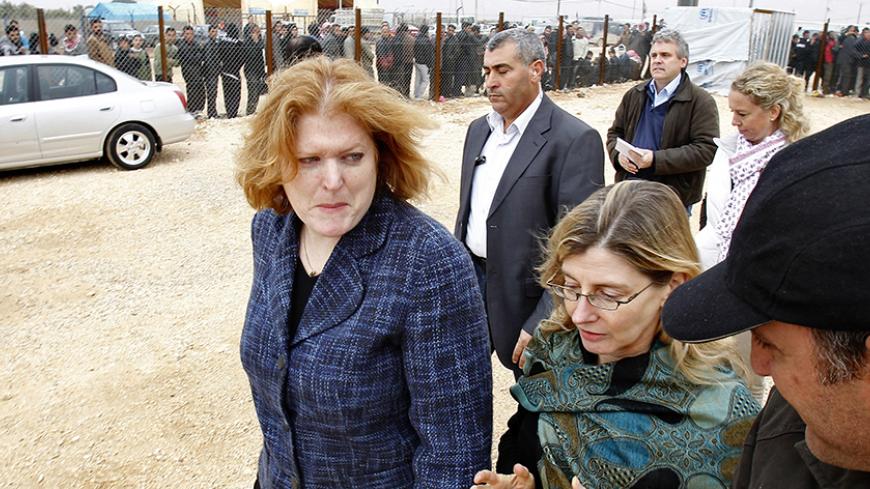 Anne Richard, assistant secretary of state for population, refugees and migration, says the United States will have accepted 2,000 Syrian refugees for permanent resettlement by September and will take “thousands more” next year to help cope with the world’s worst refugee crisis.

In an interview with Al-Monitor July 14, Richard acknowledged that the pace of resettlement has been slower than she had hoped. She said the reason was the extraordinary amount of scrutiny Syrian refugees are required to undergo to make sure that there are no potential or actual terrorists or other criminals among them.

“It takes 18-24 months from a referral [for resettlement in the United States by the UN High Commissioner for Refugees] to a person actually landing at the airport,” Richard said. “They [the Syrians] are the most highly scrutinized and vetted group of travelers to the US. They undergo extensive background checks, security checks and medical checks. A dossier is put together and reviewed by the Department of Homeland Security to determine if their story holds up and they are not terrorists, criminals or liars.”

Critics of the Barack Obama administration’s handling of the issue assert that the United States could be doing much more to address the plight of 4 million Syrian refugees — the worst such crisis in a quarter century. What began as peaceful protests against the regime of Bashar al-Assad in 2011 has deteriorated into a multi-sided civil war that shows no sign of abating as Syria splinters into fragments controlled by what former US intelligence analyst Paul Pillar has called a “smorgasbord” of militant groups.

In an opinion piece July 9, Nicholas Burns, a former undersecretary of state, and David Miliband, a former British foreign secretary who now heads the International Rescue Committee, called the response of the international community to the Syrian exodus “woefully inadequate,” and specifically criticized the United States for failing to fulfill its traditional role of accepting half the refugees approved for foreign resettlement.

The UN high commissioner for refugees, Antonio Guterres, has urged developed countries to absorb 130,000 of the most vulnerable Syrian refugees by the end of 2016 and relieve the burden on Syria’s neighbors, Turkey, Jordan and Lebanon, which have taken the bulk of those fleeing the war. Nearly 2 million Syrian refugees are in Turkey, more than 1 million in Lebanon and more than 600,000 in Jordan, with the remainder in Iraq, Egypt and elsewhere in North Africa, often living in squalid conditions.

A group of US Democratic senators has called for the United States to admit 65,000 Syrians for resettlement by the end of 2016, but other politicians are leery of potential threats to the homeland.

Richard, who said that the extraordinary vetting procedures used on Syrians date to the admission of Iraqi refugees fleeing their country after the US invasion, noted that the State Department also gets “pressure from others who are asking if these people are safe to bring to the US.”

Kristele Younes, director of UN Humanitarian Affairs at the International Rescue Committee, told Al-Monitor that she understands that the United States has stringent security rules and that Richard’s department is not in charge of the vetting.

Still, “the reality is that we are five years into this crisis and half the population of Syria has been displaced,” she said. “The system has not caught up with the gravity of this crisis.”

Younes said the United States could do more to “fast track” acceptance of the most vulnerable refugees, who include women who are heads of households, survivors of torture and members of minority groups.

Richard acknowledged that the United States lags behind European countries, including Germany and Sweden, in resettling Syrians. Germany, for example, has offered to take 30,000 Syrian refugees.

Wealthy Arab countries such as Saudi Arabia have not opened their doors to the refugees even as they support groups that are fighting in Syria. Younes said the Arab states in the Persian Gulf are not among countries that have traditionally accepted refugees, but “it would be nice if they would one day consider this.”

Richard noted that the Saudis did pledge $500,000 in humanitarian relief for Syria last year but said that the latest UN appeal, for $8.4 billion, was less than 30% funded. The United States has provided the bulk of the money that pays for feeding and housing Syrian refugees in the region — over $4 billion since 2011, Richard said.

Richard and aid workers said it is becoming increasingly difficult to raise both private and government donations for Syria’s humanitarian crisis because of donor fatigue and the fact that other emergencies keep arising.

More than 50,000 people have fled Yemen, for example, since the start of a Saudi-led bombing campaign to halt the advance of Iran-backed Houthi rebels in March. Richard said that a total of 1.3 million Yemenis have been displaced, and that some of the latest refugees include people from the Horn of Africa who had sought a safe haven in Yemen. "As the list of crises grows larger, the money is being spread thinner," she said.

“The people suffering in and around Syria are running out of time, and money is running out,” agreed Christy Delafield, senior communications officer for Mercy Corps. “Increased contributions are needed from the entire international community, including the Gulf states, and we need to make the most of donor funding by investing more in long-term strategies that address livelihoods, adolescents, infrastructure and long-term recovery, not just focus [on] implementing short-term fixes.”

“We don’t cope and we can’t cope” with the multiplicity of crises, Younes said. “We are all completely overstretched.” She compared international aid efforts to “putting a Band Aid on a skin cancer” and said even the bandage would not stick much longer absent a political solution to the Syrian civil war.

Richard agreed that a diplomatic solution was optimal. Asked if this week’s historic agreement with Iran over its nuclear program might facilitate progress toward ending the Syrian war, she said, “It’s my hope that this [agreement] could pave the way for more intensive cooperation and more productive discussions among the countries that are interested in what is happening in Syria but that have been behind different combatants.”