US leads with assistance to Syrian refugees in Lebanon but budget battles and a lack of sufficient support from wealthy Arab states threaten to exacerbate Lebanon’s “existential” crisis. 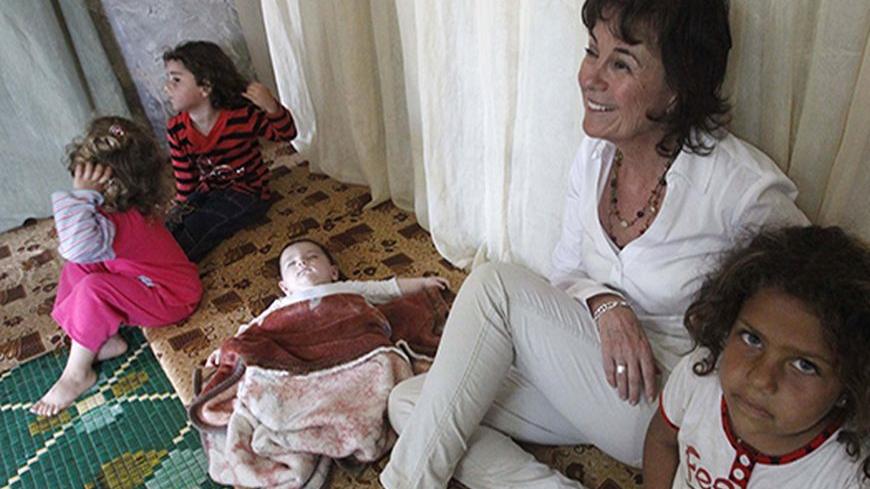 UNHCR's Representative in Lebanon Ninette Kelley sits with Syrian refugee children inside a makeshift room in Alman town, in the Shouf area in Mount Lebanon, during her visit to the refugees on World Refugee Day, June 20, 2013. - REUTERS/Ali Hashisho

Of all the foreign countries affected by the Syrian civil war, none has been impacted more seriously than Lebanon, where the Syrian refugee population is approaching 1 million – nearly a third of the Lebanese population.

In Washington on Tuesday, US, UN and Lebanese officials appealed for more support from regional as well as international donors and urged the US Congress not to let budget battles reduce American assistance of $254 million, currently the largest single contribution to Syrian refugee relief in Lebanon.

Lebanese Ambassador to the US Antoine Chedid, speaking at the Woodrow Wilson Center for International Scholars, said the refugee issue was “an existential problem for Lebanon” and urged his country’s “cry of pain” to be heard. He said the Syrian influx into Lebanon was equivalent to 100 million refugees suddenly entering the United States and that the World Bank had estimated the cost to the Lebanese economy over the past two years at $7.5 billion. Without more external help, Chedid implied, Lebanon would have to close its borders to Syrians fleeing the carnage in their homeland.

Anne Richard, assistant secretary of state for population, refugees, and migration, said a third of Syria’s population is now internally displaced or are refugees, who number 2.2 million. More than half of Syrian children no longer attend school, creating a potential “lost generation” that will undermine Syria for years to come even if the war ends soon, she said. Lebanon is hosting more than a third of the refugees, with the remainder in Jordan, Turkey, Iraq and Egypt.

Rather than build more refugee camps in a country that is still housing tens of thousands of Palestinians displaced by the Arab-Israeli conflict, Lebanon has let the Syrians find shelter in existing towns and villages. Initially concentrated in the north, the refugees now populate every corner of the country sleeping in tents and unfinished buildings where they cannot find other accommodation.

Ninette Kelley, resident representative in Lebanon of the UN High Commissioner for Refugees, said there were now more than 800,000 Syrians in more than 1,500 locations in Lebanon, making the task of providing assistance especially complicated. About 14% of the refugees are living in tents and some 40,000 are in flood-prone areas, she said, meaning that they require relocation before winter rains.

The UN agencies and NGOs are fortifying tents, providing primary health care to prevent epidemics and struggling to support the Lebanese government in educating 280,000 Syrian children of school age – nearly the number of Lebanese children currently in primary school.

Kelley said Lebanese authorities had told her they can find places for 30,000 Syrian children and possibly 70,000 more in a second shift with additional financial support but that would still leave nearly 200,000 without schooling. “We need to work very hard to find informal ideas to bring education” to these children, who are at risk of being exploited in the work force or, in the case of girls, forced into early marriage, she said.

Kelley praised the United States for providing about half of all international assistance for the Syrian refugees and coordinating well with UN agencies. Asked by Al-Monitor whether Saudi Arabia was also assisting Lebanon, Chedid said, “I don’t want to point fingers. All the neighboring and regional countries should honor their pledges.”

While Kuwait has pledged $300 million for the refugees, hosted a pledging conference in January and plans to host another early next year, Saudi Arabia offered only $80 million in new funds this year, according to an aid official who spoke on condition of anonymity.

Kelley suggested that the Saudis also were not coordinating with UN agencies, the most efficient way of delivering aid. “They follow what we do … but are not as predictable as we would like to see,” she said.

All the officials stressed the importance of support for Lebanon’s infrastructure — water, sanitation, electricity, waste removal, education and health — so native Lebanese could see some benefit from hosting so many Syrians. Kelley said she was also working with the Lebanese government to obtain permission for medical and other professionals among the refugee population to contribute their skills to the relief effort. "I don't know a country that has done as much in proportion to its size" as Lebanon in assisting refugees, she said.

Ultimately, the best answer to the crisis, the speakers agreed, is a political solution to the Syrian conflict. But even if the war ends tomorrow, they predicted, it would take years for the refugees to return home because of all the devastation.

Chedid said a temporary solution would be to relocate some of the refugees to safe zones within Syria, but so far, no country has volunteered to protect such a zone. “We are all in the same boat, waiting for a political solution,” the Lebanese envoy said.