US official on Syria: 'half the population is suffering'

US Assistant Secretary of State for Population, Refugees and Migration Anne Richard discusses the Syrian humanitarian crisis with Al-Monitor. 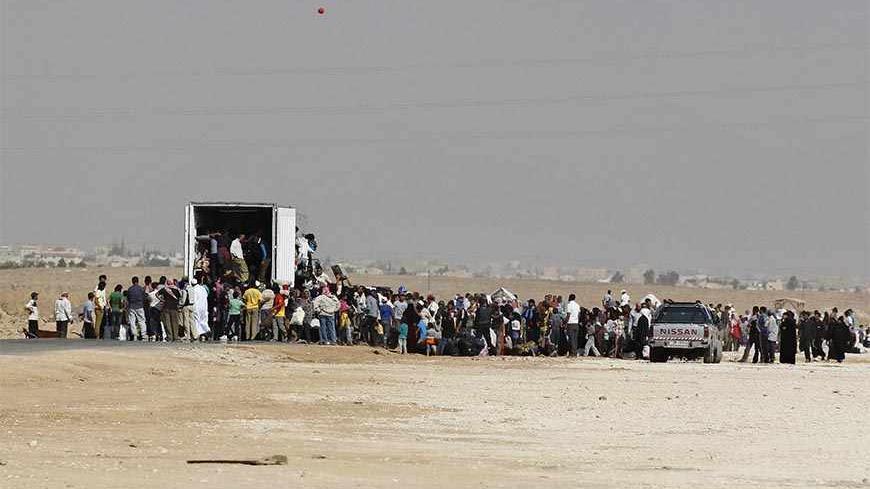 Syrians refugees try to enter a truck that will transport them back to their homeland at the Al-Zaatri refugee camp in Jordan, July 30, 2013. - REUTERS/Muhammad Hamed

Overwhelmed by refugees, Jordan is limiting the Syrian influx to a few hundred a day, while Turkey — a proud aid donor — is beginning to accept international help, said US Assistant Secretary of State for Population, Refugees and Migration Ann Richard.

In an interview with Al-Monitor, Richard, a former executive with the International Rescue Committee, said she has “never seen anything of the scale and scope” of the humanitarian disaster that is Syria today.

“Half the population is suffering,” she said. “The Rwandan genocide was really horrible but lasted a month,” while the Syrian crisis “grew so fast and really snowballed.” Last year, there were 200,000 refugees. This year, they total more than 2 million. “It just goes from bad to worse,” she added.

Richard urged the international community and wealthy Middle Eastern states such as Saudi Arabia to increase support for 2.2 million Syrian refugees in Jordan, Lebanon, Turkey, Iraq and Egypt and another 6.5 million Syrians forced from their homes within their own country, which has been wracked by civil strife for more than two years. It is important, she said, that donor states work through the United Nations and recognize international charities to make sure that aid gets to those most in need and is not diverted to extremist groups.

The United States has given $1.3 billion in humanitarian assistance for Syrians since the crisis began, Richard said. US aid is channeled primarily through the UN and nongovernmental organizations (NGOs), but access is difficult within Syria. Because the United States no longer has an embassy operating there, the Barack Obama administration works through UN agencies based in Damascus that have established relationships with the government of President Bashar al-Assad. Ironically, these groups are there because Syria used to be a haven for refugees from other crises in the region, housing large numbers of Palestinians and Iraqis — many of whom have since fled.

“A lot of UN agencies were in Damascus,” Richard said. “All are mounting an emergency response working from Damascus out.”

Richard denied accusations that these agencies are slighting the needs of Syrians in rebel-controlled territories and said that both the Syrian government and opposition groups inhibit access to many of those most in need. Earlier this year, it took an aid convoy three days to go from Damascus to Aleppo — a journey that in peacetime would take three hours. Aid workers had to pass through 54 checkpoints maintained by the Syrian government and the opposition, Richard said. She also accused the Syrian government of “gruesome” behavior, bombarding civilian populations and shelling “medical facilities, doctors and bakeries.”

Although the UN Security Council issued a presidential statement recently calling on all parties to the Syrian conflict to facilitate humanitarian access, Richard said, “There is not much evidence to show” that combatants are heeding this appeal. Syria was able to provide access to UN inspectors disarming the country of its chemical weapons, but Richard conceded that the stockpiles were in areas under government control and “not as far flung as some of the places humanitarians are trying to get to.”

The United States is also sending aid to opposition areas through an Assistance Coordination Unit set up by the National Coalition for Syrian Revolutionary and Opposition Forces.

Richard sought to distinguish between the mandate of her department and that of the State Department’s Near East Bureau, where Robert Ford, US ambassador to Syria, acts as a liaison to vetted opposition groups.

The Obama administration has two missions, she said. “One is the humanitarian impulse to save the lives of innocent civilians. The other is to provide aid to the opposition to show it has the roots of governance in these ungoverned spaces. It’s got a very different purpose, and different partners are carrying it out. We’re working with humanitarian groups that do not want to choose sides in a battle and do not want to be mistaken for having chosen sides.” She admitted, however, that this is “easier said than done.”

Outside Syria, the humanitarian challenges are also daunting. Three-quarters of the refugees are living in cities, towns and villages and not in organized camps, making it more difficult to deliver aid.

In Lebanon and Egypt, 100% of the refugees are outside camps; in Jordan, three-quarters; and in Turkey and Iraq about 60%, according to the UN High Commissioner for Refugees.

The direst situation is in Lebanon, where refugees now number nearly one-third of the country’s population. Richard said Jordan is also facing a crisis as it struggles to provide services for its own population and 600,000 registered Syrian refugees.

“Jordan and Lebanon have similar challenges in trying to help their own citizens and stretch their resources and their services to help this very large wave of refugees,” she said. The Syrian-Jordanian border, which used to be open, is now “managed” and only 300 refugees a night are coming across instead of the 1,500-2,000 that crossed previously, Richard said. She added, “We worry that there may be people who need to cross who are not getting out.”

Even Turkey, which has been a donor to relief efforts in places such as Somalia and which constructed 20 camps for the Syrians “of a caliber and quality not seen anywhere else on earth,” has begun to accept support from UN agencies and NGOs, said Richard. She praised the Turkish government for allowing refugees to move freely in and out of the camps and the Turkish Red Crescent, known as Kizilay, for providing debit cards that allow the Syrians to purchase food and other necessities from local merchants. But Richard said that there are difficulties in providing education for refugee children in their native Arabic and finding jobs for idle youth.

“It’s good initially, and it’s lifesaving, but over time that can be a very difficult place to live,” she said of the camps.

Another problem is the relatively small amount of support from nearby wealthy Gulf states. Kuwait has been an exception, hosting a pledging conference last year and providing more than $300 million in aid to UN agencies and international NGOs. Saudi Arabia, however, has provided only $62 million this year to international organizations, even as it spends millions arming rebel groups.

Nail al-Jubeir, director of information for the Saudi Embassy in Washington, told Al-Monitor that the kingdom had pledged $345 million at the Kuwait conference, of which $125 million would go to UN agencies.

“We are heavily invested in supporting the refugees,” he said, including paying rent for refugees in Lebanon and Jordan. He said much of the money is funneled through the National Campaign for Support of the Syrian Brothers, a Saudi charity.

Richard said, however, “I prefer the Kuwait approach, where they plug into the international system along with the rest of us.” She said the State Department had lodged formal protests, known in diplo-speak as “demarches,” with countries that pledged large amounts but had not followed through.