US to accept thousands of Syrian refugees for resettlement

The low number of Syrian refugees accepted so far by the United States, attributable in part to Germany and Sweden offering to "take a lot," will increase significantly in 2015, a US State Department official says. 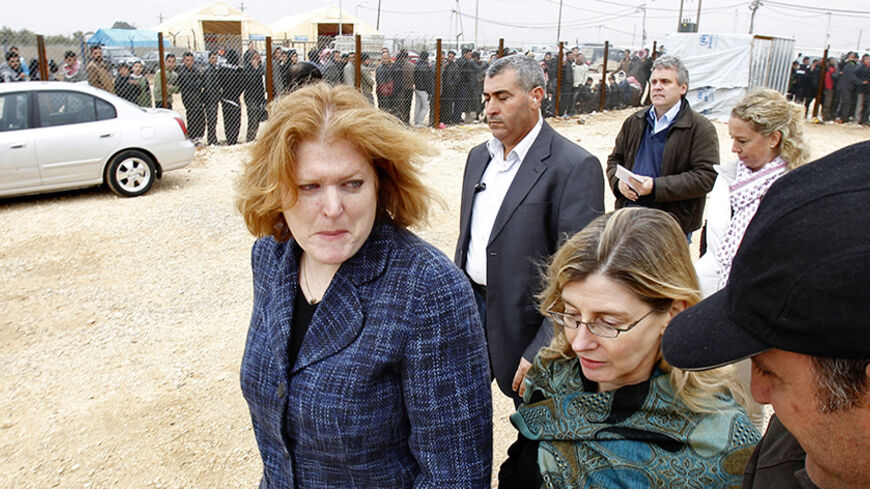 US Assistant Secretary of State for Population, Refugees, and Migration Anne Richard says the United States will dramatically increase the number of Syrian refugees allowed to resettle permanently in the United States from about 350 this year to close to 10,000 annually as the crisis grinds on into its fifth year.

While the number is minuscule given a total Syrian refugee population of 3.3 million, it reflects US recognition that the civil war in Syria is not about to end anytime soon and that, even when it does, Syria will need years for reconstruction and reconciliation.

In an interview with Al-Monitor Dec. 22, Richard said, “People are surprised we haven’t taken more.” She said the initial low numbers reflect the reality that “resettling refugees is never the first thing you do when people are fleeing an emerging crisis” and that other countries — in particular Germany and Sweden — have “stepped forward and offered to take a lot” of Syrian refugees.

According to the UN High Commission for Refugees (UNHCR), Germany has pledged to absorb 30,000 Syrians just since 2013 — nearly half of those processed for resettlement.

“We thought that was a great offer and unusually generous so we encouraged UNHCR to take advantage of that,” Richard said.

After initial vetting by UNHCR, Syrian refugees who want to resettle in the United States must be interviewed by officers of the Department of Homeland Security at US diplomatic facilities in Amman, Jordan or Istanbul, Turkey. That leaves out a million Syrians who have fled to Lebanon and large populations in Iraq and Egypt. Richard said lack of space and security concerns have kept the United States from interviewing Syrian refugees at the US Embassy in Beirut but that US officials are looking at the possibility of setting up a refugee vetting operation in the Kurdish region of northern Iraq.

Asked how many of those referred would be accepted, Richard said, “I think most” because they are likely to meet the United State's definition of a refugee as someone fleeing persecution or threats because of race, ethnicity, religion, political beliefs or membership to a particular social group.

Refugees must also pass medical and security checks. “The last part has been tricky in the past,” Richard said, but added that it is not likely to be a major problem with the Syrians referred by UNHCR. She said she expected them to comprise mostly widows with children, the elderly and people with medical conditions. “It will be fairly clear that they are not terrorists bent on harming Americans,” she said.

No preference is given to those with relatives already in the United States but if they do have family among the estimated half million Syrian Americans, “we try to reunite them because that can improve their chances of doing well in the US,” Richard said.

There are large populations of Arab Americans outside Detroit and in San Diego, but the Syrian refugees who have arrived in the United States recently have been settled all around the country.

According to the latest State Department statistics, 33 Syrian refugees were sent to North Carolina so far this year, 30 to Texas, 24 to both California and Illinois, and only five to Michigan.

Richard said her office works with nine networks in the United States, six of them faith-based, to identify communities willing to help refugees find new homes. “They sign up to take certain numbers based on what their organizations can handle,” she said.

This past year has been extremely challenging for her office, and not just because of Syria. The year started with humanitarian crises in two other countries — South Sudan and the Central African Republic — followed over the summer by Ukraine, a new Gaza war, a flood of unaccompanied children from Central America crossing the US border, the Ebola epidemic in West Africa and the sudden advance of the group that calls itself the Islamic State (IS) in Iraq.

“It’s been a tough year,” Richard, who is also a former executive with the International Rescue Committee, said with some understatement.

But on the positive side, she said, “We’ve kept millions and millions of people alive” who otherwise would have succumbed to hunger and disease.

While the United States remains the world’s leader in providing humanitarian relief — allocating about $6 billion for refugee assistance, disaster assistance and food aid in the past year and $3 billion for Syria since 2011 — other countries such as Kuwait and the United Arab Emirates are beginning to make regular contributions to the UN agencies that provide most humanitarian aid.

Even Saudi Arabia, which has been reluctant to participate in such UN programs in the past, gave half a million dollars to help Iraqis cope with the crisis caused by IS this summer, Richard said.

“We would like to see more governments contributing and those new to doing so to do it routinely in a dependable way … so that organizations like UNHCR and the World Food Program can plan ahead,” she said.

The United States takes in about 70,000 refugees a year, of whom Iraqis accounted for the largest number in the last fiscal year — nearly 20,000. They were followed by more than 16,000 Burmese, more than 9,000 Bhutanese, more than 7,000 Somalis and more than 4,000 Cubans. The number of Bhutanese is dwindling, however, opening up room for more Syrians.

Richard said it was her impression that the number of Syrians fleeing their country has “leveled off a little bit” but that the problem of those internally displaced and in need of aid is more acute than ever.

“A lot of people are trying to stay and make it inside Syria,” she said, noting that the number of internally displaced had grown from 6 million six months ago to 7.6 million now, with more than 200,000 in areas that cannot be reached by outsiders because of the fighting. “It’s hard for me to understand how they are managing,” she said.

The UN envoy for Syria, Staffan de Mistura, has floated a proposal to “freeze” the fighting, starting in Syria’s second largest city, Aleppo, to ease the humanitarian crisis there.

However, Richard expressed skepticism about the plan.

“After Staffan de Mistura came through [Washington recently], everyone wanted to give it a chance but I don’t think we have much evidence of a change,” she said. “There has been modest cooperation from the Assad regime but the thinking is that they haven’t suddenly adopted a whole new pro-humanitarian approach. It’s more that they are trying to distinguish themselves from [IS],” she said..

Others who work on the Syria crisis also expressed pessimism about a near-term solution to the conflict.

“I can’t believe that I’m still doing this after almost four years,” Sasha Ghosh-Siminoff, president and co-founder of an aid group called People Demand Change, told Al-Monitor. “When I left Syria in 2011, we all thought the regime would decide to save itself and make reforms, crumble quickly or that the international community would step in. Unfortunately none of that has come to pass.”