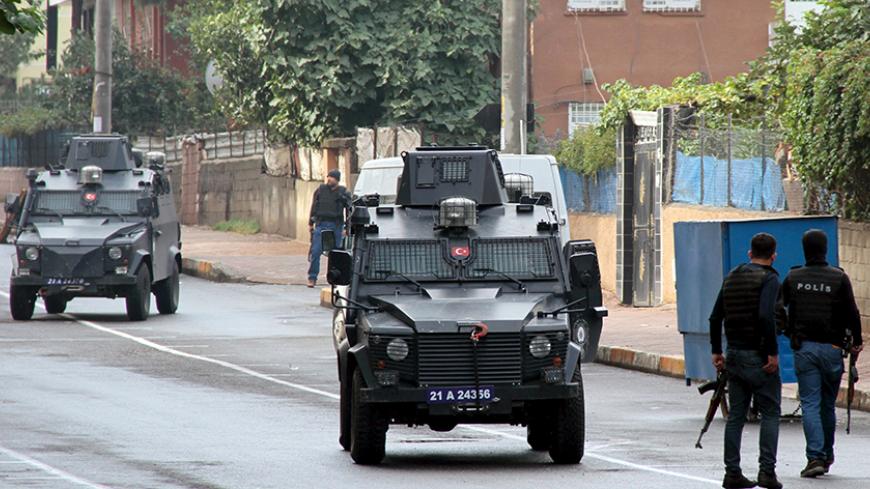 DIYARBAKIR, Turkey — In the wee hours of Oct. 26, gunfire and explosions rocked Diyarbakir, the largest city of Turkey’s mainly Kurdish southeast, as anti-terror police raided 17 locations across the city, which has been the theater of daily unrest since July. In a handsome detached house, the security forces encountered stiff resistance. Two policemen were killed and five others injured as two men charging the squad in the garden blew themselves up. The ensuing clashes at the house lasted seven hours.

Residents initially thought it was yet another operation against the Kurdistan Workers Party (PKK), but cries of “Allahu akbar” — usually used by Islamists — echoed from the house, and word was soon circulating that it was an Islamic State (IS) safe house. When the gunfire was finally over, the house lay devastated, with seven of its occupants dead and 15 in police custody.

The governor’s office confirmed that the simultaneous raids on homes and offices in the city had targeted IS. Local residents, especially neighbors, were dismayed that such a large group of IS militants was able to entrench itself in the city, the stronghold of the Kurdish political movement.

Sevdet Gerkez, a next door neighbor, told Al-Monitor the group had moved in two months ago. “I didn’t suspect anything. Sometimes I would see them in the garden. The other day, I greeted them in Kurdish and wished them well for the new home. They didn’t understand, and then one responded in Turkish that he spoke Zaza and did not understand Kurdish,” she said. “A few times I saw them digging in the garden at night. Between themselves they spoke in Zaza and, I guess, Arabic.”

The owner of another house police targeted in the same neighborhood said he had rented the place in June to a man in his late 20s from nearby Batman, who said he was married with a child.

Only a day before the raids, police had released the identities and pictures of four suspected IS militants believed to be planning suicide attacks and requested the public’s help for their capture. The government and the security forces have been under harsh criticism for turning a blind eye to IS recruitment in Turkey since Oct. 10, when more than 100 peace marchers perished in twin suicide bombings in Ankara, following a similar attack in July that killed 32 leftist activists in Suruc.

All militants killed in the Diyarbakir operation were would-be suicide bombers, local security sources told Al-Monitor on condition of anonymity. Even more remarkably, all of the five dead identified so far were natives of the neighboring province of Bingol, which — along with Adiyaman — has emerged as a leading IS recruitment ground in Turkey, as Al-Monitor reported back in July.

So what should one make of a Kurdish IS cell in the heart of an iconic Kurdish city like Diyarbakir? According to some, it is an alarming indication that the radical group is able to establish itself even in the bastions of Kurdish nationalism.

Zilan told Al-Monitor that the clout of the PKK and its longtime nemesis Hezbollah, a Kurdish-dominated Islamist group unrelated to its Lebanese namesake, would prevent IS from taking genuine hold among Kurds. Stressing that Hezbollah and its political offshoot, the Free Cause Party, were not a Salafist but a Shafii movement, Zilan said, “They [IS] are not backed by Hezbollah, which is pro-Iranian. And Iran’s influence lately has been positive, drawing Hezbollah away from al-Qaeda. Also, Hezbollah’s practices may be wrong, but it has a Kurdish [national] consciousness.”

Separately, Zilan cast doubt on the motives of the raids. “Were the [militants] preparing for an attack that Turkey couldn’t afford or was Turkey intending to only detain a few IS militants to advertise itself internationally?” he asked, adding that the two men who blew themselves up might have messed up what could have been only a token round-up operation.

Mehmet Kurt, an academic at Bingol University who specializes in Islamism and radicalization in the Kurdish community, has closely followed IS recruitment efforts in the region. He is not surprised that the five militants killed in the raid were natives of Bingol, where, he said, the recruitment has proceeded openly, led by individuals known to everyone, very much in the pattern seen in Adiyaman, from where the Ankara and Suruc bombers hailed.

The militants killed and detained in Diyarbakir were well-known to the locals in Bingol, Kurt told Al-Monitor. “One of those detained was even supposed to have a wedding today [Oct. 28]. The people know them very well. And if the ordinary people know them and speak of their activities, the state certainly knows them, too,” he said. “The problem, however, is not simply a problem of two cities, Bingol and Adiyaman. The question that needs to be asked is, ‘Why is the recruitment mostly among Kurds?’”

According to the researcher, the many traumas of the long-standing Kurdish conflict have made Kurds open to extremist influences. “The unjust suffering and victimhood has spawned reactionary groups that are well able to find a base,” he said. “Not everyone in Diyarbakir sympathizes with the Kurdish political movement. There is a considerable populace in conflict with them. And though Bingol, Adiyaman and maybe Diyarbakir are currently under the spotlight, such bases exist everywhere.”

Yet Kurt believes those grassroots are not strong enough to breed IS into a “social movement.” He warns, however, that cells will continue to exist and threaten Turkey’s already fragile ethnic and religious fault lines. According to him, IS seeks to provoke Turkish-Kurdish communal strife.

“There was a certain degree of Islamist extremism in the 1990s, which has now transformed to Salafist extremism. Those currents grow in time, become more radical and then go underground before coming back in the form of a new monster,” Kurt said, adding that IS was now said to be withdrawing its members underground.

“[IS] follows this strategy: It analyzes well the arteries of nation-states and the tensions in ethnic, religious and sectarian conflicts; recruits certain types in these conflict realms; and then unleashes them to create uncontrolled tension, violence and chaos,” he said. “The strategy aims to foment confrontations on the basis of religion, sect, ethnicity and lifestyle. And, sadly, Diyarbakir is a most suitable ground for that.”