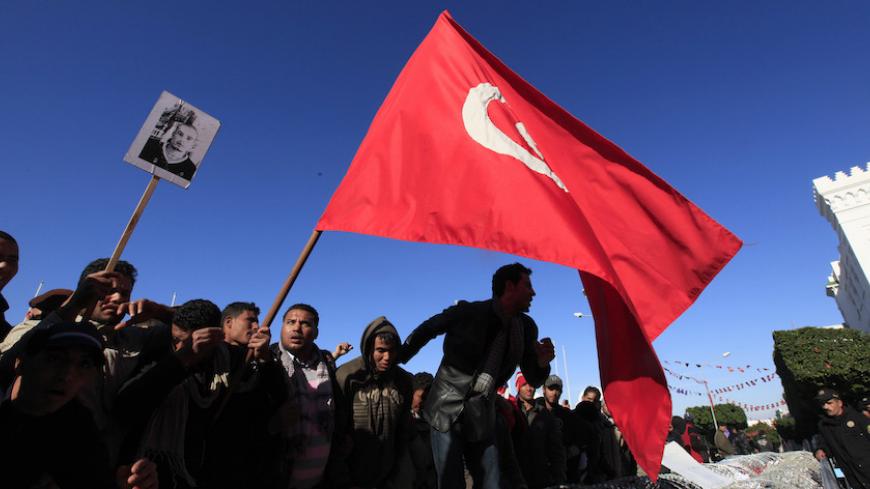 Democracy activists across the Middle East are taking solace in the Nobel recognition for Tunisia’s Jasmine Revolution while their own Arab Spring dreams remain unfulfilled.

Political reformers from Morocco to Egypt to Syria say the Tunisian quartet’s peace prize win is a small but symbolic victory for a protest movement that has either fizzled out or exploded into chaos everywhere else. They hope it will recharge activists while showing Arab leaders the virtues of peaceful democratic change.

“Tunisia was the only Arab Spring country that carried out the revolution correctly, thus it deserves to reap the benefits,” Tamer el-Kady, spokesman for Egypt’s Revolution Youth Union, told Al-Monitor. In Egypt, he said, “We have now been deceived, [we have] returned to something worse than the [Hosni] Mubarak regime, violating all principles of the constitution.”

More than 330 Tunisians were killed during the December 2010 uprising that led to the fall of President Zine El Abidine Ben Ali. The Tunisian National Dialogue Quartet of unionists, lawyers and human rights activists was formed in 2013 to save a democratic transition that threatened to go off the rails amid institutional gridlock and political assassinations.

Safwan Mohamed, a liberal activist who was among the first to sign a 2010 petition calling for political reforms under former President Mubarak, called the Nobel prize a “great achievement” for peaceful political transitions. He vowed that Egypt’s youth movement still had “more visions, ideas and alternate plans” to offer but that taking to the streets to protest “would be insane.”

“Although I am happy that Tunisia won the prize, we despair over what Egypt has come to,” liberal activist Safwan Mohamed told Al-Monitor. “We deserved to be pioneers of the Arab Spring.”

Others, by contrast, took offense at what they deemed a Western “conspiracy” against countries that have cracked down on political Islamists.

“The ones deserving of this prize are the Egyptian people, who eliminated a fascist religious regime,” Mohamed Nabawi, spokesman and co-founder of the anti-Muslim Brotherhood Tamarod Movement, told Al-Monitor. “We believe that Nobel Prize nominations are part of the global conspiracies.”

And Tarek el-Kholy, founder of the Youth of the Third Republic Front that backs Egyptian President Abdel Fattah al-Sisi, called the prize “politicized and no longer neutral.”

“I felt that Tunisia winning this prize was a type of ruse and a political message that the West is not satisfied with Egypt,” Kholy told Al-Monitor. “[It was meant to] suggest that Egypt had strayed from the path of the revolution.”

Assaad Thebian, a leader of Lebanon’s You Stink movement protesting the government’s corruption and paralysis, applauded the Nobel as an “amazing honor” for the Tunisian people. He noted that the country’s “secular state” and “very liberal political life for decades” eased the transition away from strongman rule under Ben Ali.

“It is a strong message sent to the countries that witnessed an Arab Spring that peaceful change is the destiny and there is no other choice but dialogue between the components of any nation,” Thebian said in a statement to Al-Monitor, speaking only for himself. “Tunisia was remarkable in their democratic change process contrary to other Arab countries and should be a role model.”

The Oct. 9 announcement also offered a flicker of hope for besieged Syrians whose own peaceful uprising has since given way to a civil war that has left more than 200,000 dead over the past 4½ years. Hassan Kattan, a 24-year-old activist who participated in the Aleppo mosque demonstrations in 2012, told Al-Monitor that recognizing peaceful protesters was “good and exhilarating.”

"Certainly, the Tunisians winning the Nobel Peace Prize motivates us,” Kattan said. “Perhaps we can say that it is the sole light amid the darkness and frustration we suffer from. The truth is that we [Syrian revolutionaries] have been disappointed by the whole world because of their silence."

Closer to Tunisia, Moroccan Green Party leader Fatima Alaoui took to social media to bemoan the lack of progress four years after a Tunisian fruit vendor set the Arab Spring in motion by setting himself on fire.

“Thank you Nobel 2015 for the courage to remind us of our revolutions, our lost springs and our unrepresentative parliaments,” the longtime activist wrote on Facebook.

Such reactions appear to be exactly what the Nobel committee was aiming for with this year’s peace prize.

“The Norwegian Nobel Committee hopes that this year's prize will contribute toward safeguarding democracy in Tunisia and be an inspiration to all those who seek to promote peace and democracy in the Middle East, North Africa and the rest of the world,” the committee said in its announcement. “More than anything, the prize is intended as an encouragement to the Tunisian people, who despite major challenges have laid the groundwork for a national fraternity which the Committee hopes will serve as an example to be followed by other countries.”

Those wishes were echoed by Western leaders from US President Barack Obama to British Prime Minister David Cameron, who view democratic change as an antidote to radical Islam. Arab leaders also heard the message loud and clear, and for the most part responded with silence.

Algerian President Abdelaziz Bouteflika, who is seeking a leadership role in North Africa, was one of just a handful of leaders to publicly congratulate Tunisian President Beji Caid Essebsi — while sidestepping any mention of what the Nobel Prize means for the struggle for democracy in the wider region.

"I seize this happy opportunity to welcome the privileged and exemplary relations between our two brotherly countries and reiterate Algeria's constant support to the Tunisian people and government and to the process of renewal and dialogue," Bouteflika said. “Algeria will spare no effort in building the great Arab Maghreb which will bring progress, prosperity, peace, security and stability to our peoples."

Queen Noor of Jordan, an early champion of the Arab Spring movement, was one of a very few Arab leaders to acknowledge Tunisia as a model for the region.

“I am so very proud that the Tunisian example for our region has been acknowledged in this way," she tweeted Oct. 9.

Human rights groups were also quick to celebrate the “hope” that the Nobel Prize offers to peaceful protesters who seek a middle way between authoritarianism and radicalism.

“In a region torn apart by wars, sectarian violence and religious extremism, desperation and cynicism have become the new normal,” Ahmed Benchemsi, director of advocacy and communications for Human Rights Watch in the Middle East and North Africa, told Al-Monitor in a statement. “In that context, this Nobel Prize shows that hope is not dead, and offers a much-needed positive message: that peaceful conflict resolution and democracy building do work! Even better: such efforts can become a matter of national pride and international recognition.”

Even the most patient Arab Spring revolutionaries, however, are left wanting much more.

"I don't think there is any prize in the world befitting the extent of the sacrifices made by peaceful activists in Syria, after four years of patience and struggling with the terrorism of the Syrian regime and IS [Islamic State],” Kattan said.