Palestinian journalists covering the current events in Jerusalem and the West Bank are torn between the professionalism their jobs require and their sense of nationalism, often conveying a subjective image of the news. 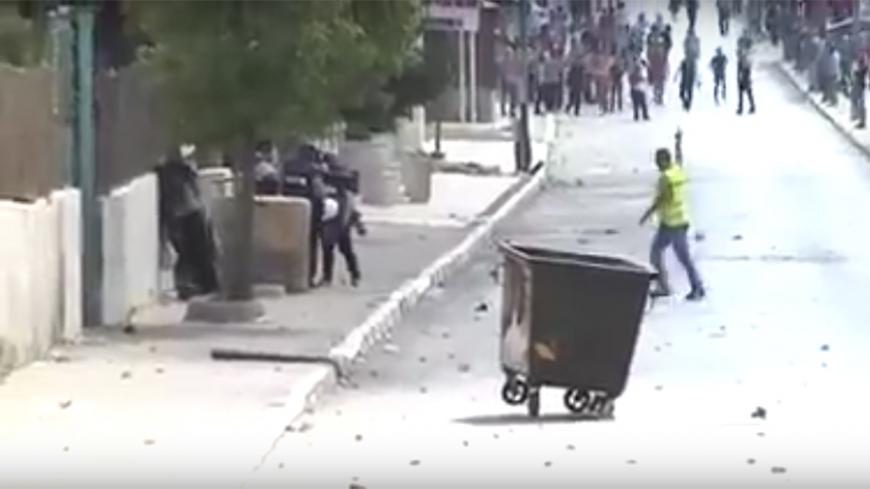 A screen grab from a YouTube video shows Palestinian photojournalist Jad Gado signaling to call an ambulance for an elderly lady who is trapped between protesters and Israeli border police, choking from tear gas, Sept. 29, 2015. - Youtube.com/عاوور محمد

While filming the events taking place at the northern entrance to the city of Bethlehem, photojournalist Jad Gado put his camera aside to help an elderly lady who was trying to cross the road before Israeli soldiers threw tear gas bombs at demonstrators there. The woman was unable to breathe and took cover behind a tree on the side of the road; that is when Gado saw her and ran toward her.

Gado, 32, a cameraman for the Palestinian News Network, took off the mask he was wearing to protect himself from the tear gas and gave it to the woman. He then asked the paramedics to come and take her somewhere safe. “The lady was in a spot where it was hard for paramedics to see her. I noticed she was suffocating, so I headed her way to help her,” Gado told Al-Monitor.

Gado was the only bystander who could reach the woman, and he believed what he did was his duty as a human being, as it did not interfere with his job as a journalist. “The lady was simply passing by, and she was not participating in the confrontations. She wasn't carrying any weapon or stones,” he said.

However, Gado was criticized by some journalists under the pretext that his actions did not show professionalism as a journalist in the field.

This kind of criticism represents a controversy that mars the journalism profession, particularly coverage on the ground. During the recent events in the West Bank, journalists find themselves spending more time on the ground covering the events in different Palestinian cities. In this context, the question arises as to whether a Palestinian journalist can separate his profession from his Palestinian identity.

Photojournalist Osama Hassan believes that Gado’s actions did not interfere with the professionalism required of him while covering the confrontations. He said that during his career, he found himself in similar situations and acted exactly like Gado did when he helped the elderly woman.

Hassan works as a freelance photographer, and he has been working for Al Jazeera English during the current intifada. He told Al-Monitor, “In residential areas, we are often forced to help civilians including women, the elderly or children, or call an ambulance for them; I never thought that this affected my professionalism.”

He added, “During the confrontations around the Qalandia checkpoint, soldiers were throwing many [tear gas] bombs at houses, resulting in several cases of suffocation. In such instances, a journalist can offer help, but only if other people cannot make it there or if a paramedic is nowhere to be found.”

Journalist Hussam Izz al-Din, an Agence France-Presse correspondent in the West Bank, believes that when it comes to the Palestinian situation, there is a clear challenge for journalists to separate their professional work from their sense of belonging to the Palestinian cause as well as their national duty.

“There is nothing wrong with helping out an injured person or a passerby, but it is not right for a journalist to become part of the event [he is covering],” he said.

Izz al-Din, who is also president of the Ethics Committee in the Palestinian Press Syndicate, said that despite the developments in Palestinian journalism, the journalists’ nationalistic feelings still dominate their mission and affect their credibility internationally.

Izz al-din said that in his observations of daily news coverage, he sees journalists working without safety precautions and without life insurance and protection by the institutions for which they work, simply because they believe their work as a journalist is a national duty.

“So far, there is controversy between professionalism and nationalism, although there is no conflict between the two. A journalist who conveys the reality as it is to the world is performing a national duty, but prioritizing the national duty creates a distorted journalistic image that lacks credibility, which leads to questioning the journalist around the world,” he said.

In regard to the press coverage during the recent clashes, Izz al-Din said, “The Palestinian media does not meet the required professional standard; a lot of information is incorrectly conveyed on the Palestinian local level due to journalists not abiding by the rules of journalism and giving priority to the national duty at the expense of the professional duty. We must stress that a journalist’s work in the field is to convey the truth and reality without falsification and exaggeration; journalists are neither rebels nor political activists.”

He added, “Journalists are often affected by what is going on the ground, especially if they are covering local events that concern them, but this does not mean that they should not be professional — they should always respect the profession’s rules and ethics.”

As an example, he recounted an instance when he tried to convince children to stay away from confrontations on the northern entrance of al-Bireh, near Beit El settlement, without specifying when. He said that it is not the journalist’s job to do that, but by doing so the journalist is conveying this image to the local authorities of helping children to stay safe.

Farid Abu Dheir, journalism and communications professor at An-Najah National University, agreed with Izz al-Din and said that the Palestinians’ stance against the occupation and its practices dominates the journalists’ stance, which negatively affects journalists' missions.

However, Abu Dheir believes journalists can control this by doing their job while respecting their social responsibility on the one hand and their professionalism required on the other.

He told Al-Monitor, “The boundary between professionalism and nationalism is only present in the journalists’ mind. He should assess the situation on the ground and clearly convey the news and events during coverage.”

Regardless of the controversy in the Palestinian media on the journalists’ professional attitude and national duty, a journalist in the field has the responsibility to convey the truth to the world — a role that a rebel or a fighter cannot achieve for their cause and their country.