What do Israelis want more than all-inclusive Turkish holidays?

A new survey indicates that Israelis are keen to restore relations with Turkey, mainly to battle the Islamic State. 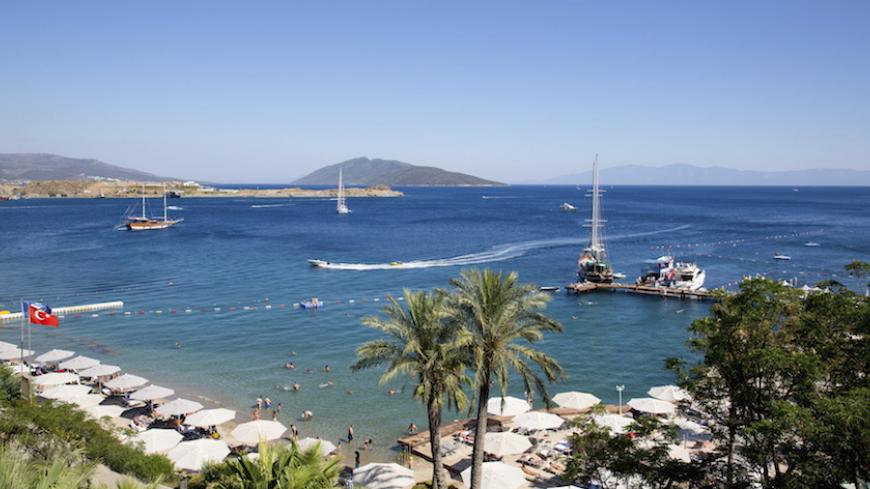 Holidaymakers rest at a beach in the resort town of Bodrum, Turkey, July 14, 2014. - REUTERS/Tuncay Dersinlioglu//KODA Collective

The term “all-inclusive” was popularized by Club Med a generation ago to describe an innovative approach to vacation packaging. For a single fee, guests could enjoy all of the benefits that the facility had to offer. Since then, it has become a generic term, commonly used by Israelis to describe a vacation in one of the many hotels built along the country’s Mediterranean coast. In contemporary Hebrew, “all-inclusive” has come to mean an inexpensive but enjoyable holiday at a Turkish hotel with an all-you-can-eat buffet open round the clock, and — even better — free drinks at the bar, too.

When Turkish Foreign Minister Feridun Sinirlioglu served as his country’s ambassador to Israel in the early 2000s, his goal was to increase the number of Israeli tourists to his country from 200,000 a year to half a million. In the summer of 2008, just a few months before the Davos incident in which then-Turkish Prime Minister Recep Tayyip Erdogan assailed Israeli President Shimon Peres, the number of Israeli tourists visiting Turkey had already surpassed the target at almost 600,000 that year.

Diplomatic relations between the two countries were downgraded following the Mavi Marmara flotilla incident in 2010, when Israeli troops killed 10 Turks who were trying to break Israel’s siege on the Gaza Strip. Since then, the number of Israeli tourists to Turkey has plummeted to just a few thousand per year.

Israeli tourists sought out “all-inclusive” alternatives nearby, but were repeatedly disappointed. They went on holiday to Greece, Cyprus and Bulgaria, but continued to dream of Turkey. As a result, the Israeli media, which kept close tabs on ups and downs in the negotiations between Jerusalem and Ankara for the normalization of bilateral relations, created what can only be described as an “all-inclusive index.” Every so often, news and current events shows returned to the most popular vacation resorts in Antalya and Bodrum, counted the number of Israelis there, examined the attitudes of service providers toward them and compiled the information into an index of how willing Israelis are to forgive Turkey and turn a new page in their relationship. According to this index, Israelis may be getting ready to forgive Erdogan for his verbal assaults against them because they really miss their old vacation haunts.

Given all of that, it is very interesting to see the figures released in a new survey by the Israeli institute for regional foreign policy Mitvim, shared for the first time here. The survey indicates that most Israelis think that conditions are ripe for the two countries to rehabilitate their relationship. The reason they give, however, is not so that they can return to their favorite holiday hotspots, but security concerns.

Following reports that some progress has been made in contacts to bring about reconciliation between the two countries, pollsters from Smith Consulting asked, “What do you think is the best reason for Israel to repair its relationship with Turkey?”

Of the 500 Jewish respondents, only 6% answered that the most important reason is tourism. In contrast, 48% responded that the reason is a need for security cooperation between the two countries to deal with Syria and the Islamic State. A quarter of the respondents said that there was no need for Israel to repair the damaged relationship.

In another, much smaller sampling of 100 respondents among Israel’s Arab population, half answered that relations with Turkey should be normalized so that Ankara can help advance the peace process between Israel and the Palestinians. Only 21% of Arab respondents noted the need for security cooperation, while just 15% mentioned the “all-inclusive” vacations in their answers. Nevertheless, it should be noted that this particular sector of the population had no problem visiting Turkish resorts even when the crisis was at its most turbulent.

The survey was conducted for the Israel-Turkey Diplomatic Dialogue conference, organized by Mitvim and Turkey’s GPoT Center, held Oct. 18 in Herzliya. The chairman of Mitvim, Nimrod Goren, told Al-Monitor in an interview that the conference was marked by cautious optimism. Very recently, he noted, there have been small, measured and gradual steps toward a practical improvement in relations. He pointed out that now-President Erdogan is very careful to keep his criticism of Israel relatively low key, despite the escalation in the Palestinian-Israeli conflict and the snap elections in Turkey right around the corner. In the background, he added, is increasing Russian involvement in Syria, which concerns Israel and Turkey alike and has caused both countries to reassess their diplomatic positions. For the past few years, Israel and Turkey have differed in their attitudes toward Syria, but recent developments could result in the two countries developing common interests on the issue.

Goren emphasizes that if, until very recently, civil matters such as natural gas and tourism were at the center of efforts to improve relations between Israeli and Turkey, it is now commonly believed that security issues will take the stage.

Despite the optimism, it is important to note that Israeli authorities dealing with the issue have put efforts to normalize relations on hold, at least until the Turkish general election on Nov. 1. As I wrote for Al-Monitor after the last Turkish election, the prevalent opinion among Israeli politicians and decision-makers is that if Erdogan is weakened, forced to compromise on his political ambitions and form a coalition government, the chances for normalizing bilateral relations increase.

On the other hand, among Israeli analysts, the opposite approach is prevalent. They claim that Israel needs a politically strong Erdogan; one who no longer must fight for his future or his standing and who will receive in the next elections absolute power, allowing him to amend the constitution and become a president with greater authority. They argue that only if Erdogan obtains such a position would he be able to advance the understandings reached between Israel and Turkey almost two years ago, and they are now waiting for the approval of Israeli Prime Minister Benjamin Netanyahu.

Goren is an enthusiastic and fervent supporter of rehabilitating relations between the two countries. He said that changing circumstances in the Middle East have opened new opportunities for the normalization of relations between Jerusalem and Ankara, specifically because so many Israelis now regard Turkey as a partner in the war against IS — more than just a lavish holiday destination.