After tumultuous history, what's next for Turkish-Iranian relations?

For Turkey and Iran, preventing differences over regional issues from spilling into their bilateral relations will — now more than ever — be a balancing act. 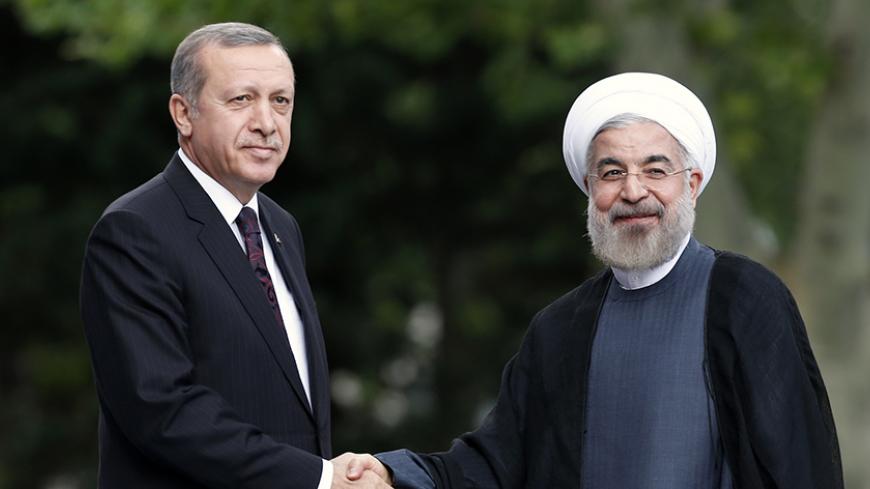 TEHRAN, Iran — For the past 35 years, political and economic development in Iran and Turkey have experienced a virtually inverse relationship. As one country has seen improvement, the other has gone into decline. In the 1980s, Turgut Ozal developed Turkey’s economy while Iran was fighting a devastating eight-year war with Iraq. Then, with the end of Ozal's era, successive unstable administrations came to dominate Turkish politics during the 1990s. Meanwhile, Presidents Ali Akbar Hashemi Rafsanjani and Mohammad Khatami improved Iran’s economy. The Iranian inflation rate, which topped 29% in 1998, had dropped to 13% by 2005.

Similarly, Mahmoud Ahmadinejad’s eight-year rule, which began in 2005, coincided with the Justice and Development Party's (AKP) rise to power in Turkey. Incumbent Turkish President and former Prime Minister Recep Tayyip Erdogan lowered Turkey’s inflation rate from 70% in 2001 to 7.4% in 2013. During the same period, under Ahmadinejad, Iran’s inflation inversely experienced an increase to 43%.

In an interview with Al-Monitor, Firooz Dowlatabadi, Iran's former ambassador to Turkey, said he believes there is a relation between these concurrent developments. Dowlatabadi told Al-Monitor, “When studying the history of relations between these two countries, we can see numerous examples of such influences. After the victory of the [1979] Islamic Revolution in Iran, Islamist movements started to flourish in Turkey. When Khatami won the presidential elections and the Reformists gained power in Iran, it had an impact on the Justice and Development Party of Turkey’s electoral victory. These changes did not occur independent of one another, considering the fact that both of these countries play pivotal roles in the region.”

Turkey is determined to see Syrian President Bashar al-Assad toppled, while Iran is equally unwavering about seeing Assad’s government survive. After Iranian President Hassan Rouhani won the presidential vote in 2013, and then-Turkish Foreign Minister Ahmet Davutoglu traveled to Tehran as the Syrian conflict turned into a war of attrition, Iranian officials started to think that perhaps Ankara sought in Iran an intermediary for Turkey in the Syrian conflict, and that Turkey is interested in changing its own policy toward Syria.

However, these hopes were in vain. Erdogan steadfastly wanted Assad to be toppled and clearly expressed his dissatisfaction with the fact that Iran supports Assad in a CNN interview.

Syria is certainly not the only point of contention between Tehran and Ankara. Indeed, Turkey’s all but transparent policies toward IS have further strained relations with Iran. Dowlatabadi, the former Iranian envoy to Ankara, told Al-Monitor, “Turkey made a mistake in becoming the supply source for IS in the region, and it has only now realized how problematic this policy has been for it. Its other mistake was trying to blame its troubles on Iran, since Iran is fighting IS.”

Although there have been numerous official visits between both sides, the atmosphere does not appear very cordial. Just before his most recent visit to Tehran, Erdogan did an interview with France 24 in which he spoke of Iran’s role in the region as being irresponsible. This generated a lot of objections in Tehran, especially among members of the conservative-dominated parliament.

Although Erdogan met with both Iran’s Supreme Leader Ayatollah Ali Khamenei and Rouhani during his visit, Turkey and Iran continue to disagree over regional issues.

When the July 14 Joint Comprehensive Plan of Action was concluded between Iran and six world powers, Turkey welcomed it and Erdogan congratulated Iran. However, it appears that as far as regional issues are concerned, the two countries continue to disagree. After returning from Austria, where the nuclear agreement was struck, Iranian Foreign Minister Mohammad Javad Zarif went on a tour of regional countries. Of note, neither Turkey nor Saudi Arabia were among his stops. Although Zarif was scheduled to visit Ankara, there was a last-minute cancellation, which, according to a joint statement issued by the Ministries of Foreign Affairs of Iran and Turkey, was due to scheduling issues.

However, according to France 24, the cancellation was related to Zarif’s penning of an op-ed in Turkish daily Cumhuriyet, which is seen as critical of the ruling AKP. In the op-ed, Zarif had criticized certain countries in the region and accused them of supporting terrorist groups in Syria.

A few days later, Turkey’s ambassador to Tehran was summoned by Iran’s Ministry of Foreign Affairs over concerns for the safety of Iranian citizens in Turkey. This was after a bus carrying Iranian travelers was attacked on its way to the Turkish city of Van, near the Iranian border.

Although Iran and Turkey have yet to experience major problems in their bilateral relations, it is safe to say that tension over regional issues is reaching the highest point in the past three decades. Elaheh Koulaei, former Iranian member of parliament and now a professor of political science at the University of Tehran, told Al-Monitor, “Now that a nuclear agreement has been reached the relationship between Iran and Turkey will certainly further deteriorate, since Turkey benefited from sanctions against Iran, and will not be happy about Iran regaining its previous position in the region.”

However, Dowlatabadi sees things differently. He told Al-Monitor, “The two sides have a history of political relations with each other and know about the importance of their bilateral ties. It is doubtful that they will allow these agreements over regional matters to affect their bilateral relations. Of course, Erdogan needs to change his problematic regional policies. These policies are also the reason why the AKP lost a lot of votes in the Turkish parliamentary elections.”

With Turkey set to hold fresh general polls, one thing is clear: If the AKP maintains its hold on power, and if Erdogan refuses to change his regional policies, Turkey’s relationship with Iran is not likely to improve. This is particularly the case since the regional conflicts are escalating rather than winding down. Furthermore, considering Turkey’s worsening domestic turmoil, especially in relation to the Kurdish issue, tension can very easily increase between Tehran and Ankara. Of note, following the IS blitz in northern Iraq last summer, Iraq’s Kurdistan Regional Government has moved farther away from Ankara and allied itself closer with Tehran.