Prime Minister Benjamin Netanyahu feels threatened by Yisrael Beitenu head Avigdor Liberman's rising popularity over his management of the current wave of violence, which is why he keeps coming up with short-lived security ideas. 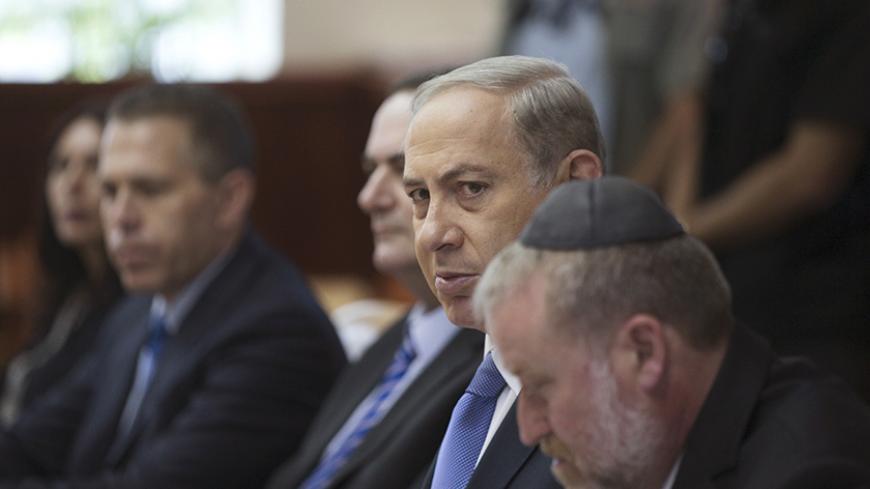 At the weekly Oct. 18 Cabinet meeting, held in the shadow of the Palestinian terrorism wave that refuses to let up, Prime Minister Benjamin Netanyahu threw out an idea — the establishment of a special court for security affairs to deal with terrorism related offenses. Netanyahu had heard the idea the previous week during one of the many consultations he conducted with senior security officials, probably from the Shin Bet agency, whom he asked to present measures to counter what seemed at the time to be loss of control in the face of a campaign of popular terrorism. As far as one can tell, there has not been a follow-up discussion of the troubling initiative since then.

The prime minister raised the idea of a “court for security affairs” a day after a poll, which was of special concern to him, was aired on Channel 2’s “Meet the Press.” According to the survey, 29% of the public believe that his bitter rival Avigdor Liberman, the former foreign minister in his two previous governments, is the person most suited to tackle the current terrorism wave, compared with only 17% who regard Netanyahu as the right man for the job. For Netanyahu, this is a worrying trend, given that a similar poll conducted the week before also showed that Liberman, who is the head of the Yisrael Beitenu party, was the public’s preferred choice to handle terrorism. These are difficult results for “Mr. Security,” and he came to the simple conclusion: He is losing ground on the right to Liberman. This forced him to launch a blocking maneuver. Therefore, when Netanyahu pulled out the idea of a “special security affairs court” the next day, he did so in order to appease public opinion on the right and to prove that he is creative and wholly target oriented when it comes to combatting terrorism.

Netanyahu’s quick draw at that Cabinet meeting failed to make headlines, but he did not give up and used it once more this week, on Oct. 26, at a session of the Knesset’s foreign affairs and defense committee marking the 20th anniversary (according to the Hebrew calendar) of Yitzhak Rabin’s assassination on Nov. 4, 1995. When the Knesset members sought to understand what he meant and whether he was, in fact, referring to a new type of tribunal, Netanyahu preferred not to elaborate. From the context in which the things were said, and given the current terrorism wave, those present inferred that Netanyahu meant that the new court would handle security affairs, administrative detentions, revocation of residency and citizenship from terrorists, house demolitions and terror-related offenses.

Netanyahu did not elaborate because this was just one of many suggestions presented to him, not completely developed, but troubling by any measure. It implies criticism of the Supreme Court, hinting that the judges are not doing their jobs when it comes to protecting state security. Former Justice Minister Tzipi Livni was right in saying that the idea undermines the standing of the Supreme Court and “implies that it damages state security.”

The idea would also be untenable for the international community, which would regard such a judicial court as an official statement of intent to discriminate between the Israeli Jewish population and the Palestinian population, along with Israeli Arabs suspected of terrorist activity.

Such a move would also provide a stamp of approval for the discrimination already practiced and serve Israel’s growing number of critics. After all, tribunals of this kind operate in states such as Turkey and Jordan. No one would believe that such a court would provide free and just legal recourse.

Interestingly enough, even Justice Minister Ayelet Shaked of the HaBayit HaYehudi party dissociated herself from the initiative, and according to to senior sources in her office, reportedly said that she does not plan to promote such a harmful plan.

And Netanyahu? He probably did not really mean to go through with the idea, given that there have been no indications that the prime minister intends to pursue it since he brought it up. He is likely busy looking for the next “idea” to stop his hemorrhaging popularity rating and hoping that this is a passing phase.

In the meantime, other than the idea “under consideration” to create a security court, Netanyahu had time to throw out another idea recently — which crashed as quickly as it arose. It, too, does not appear to have been backed up by any real plan. According to a Channel 2 report, which has not been denied, at a meeting of the diplomatic and defense affairs Cabinet at the beginning of October, Netanyahu suggested revoking the Israeli identity cards of some 80,000 residents of the Shuafat refugee camp and of Kafr Aqab, neighborhoods located on the other side of the East Jerusalem separation fence. Netanyahu explained (sources in his office quoted him saying so, according to Channel 2) that in these places “there is no enforcement, there are no obligations, only rights. We should examine taking away their residency and hold a debate on the matter.”

Here, too, Netanyahu threw out a far-reaching and troubling idea, by any measure. Not just in terms of international law and the fact that he cannot leave Palestinians in these neighborhoods devoid of any civil status, but also in terms of the right wing. Transportation Minister Yisrael Katz of Netanyahu’s party thought he was imagining things and perhaps had not understood the prime minister, and he reacted accordingly: “This is a far-reaching decision that requires a referendum, because it entails giving up territory.”

On second thought, anyone familiar with Netanyahu’s tendency to pull ideas out of a hat (and that means just about anyone who ever worked with him) knows that these threats are mostly hollow. There is no plan, there is no detailed examination, there is only a mention of noncommittal ideas in order to help him confront the right and the public and prove intensive activity on the road to another term. The temporary barrier placed between the Jewish Armon Hanatziv neighborhood and the Palestinian neighborhood of Jabel Mukaber in Jerusalem was also designed largely for public relations and visibility. No one really thinks that three cement blocks measuring 300 meters (328 yards) in length are the ultimate response to the unceasing terrorism. So, too, is Netanyahu’s order forbidding Knesset members from going to the Temple Mount — the one he issued when the fire was already burning after months of provocations on the part of the Jewish right wing and Israeli-Arab legislators.

As of Oct. 30, not a day has gone by without stabbings or attempted terror attacks. Over the past week these occurred mostly on the other side of the Green Line, providing a sense that the terror wave was dying out. But no one knows what the morrow will bring.

A very close Netanyahu associate said about him that he lives from Saturday to Saturday (from one Sabbath to the next). He meant that the prime minister survives the moment and does not even look one month ahead. There is no better description when one examines the way Netanyahu has been handling himself throughout the current terrorism wave.