Can Iraq meet US, Russia halfway?

As political forces have called for Russia to intervene in Iraq, as it has in Syria, Iraqi Prime Minister Haider al-Abadi has been cautious about what steps to take regarding Russia and the United States. 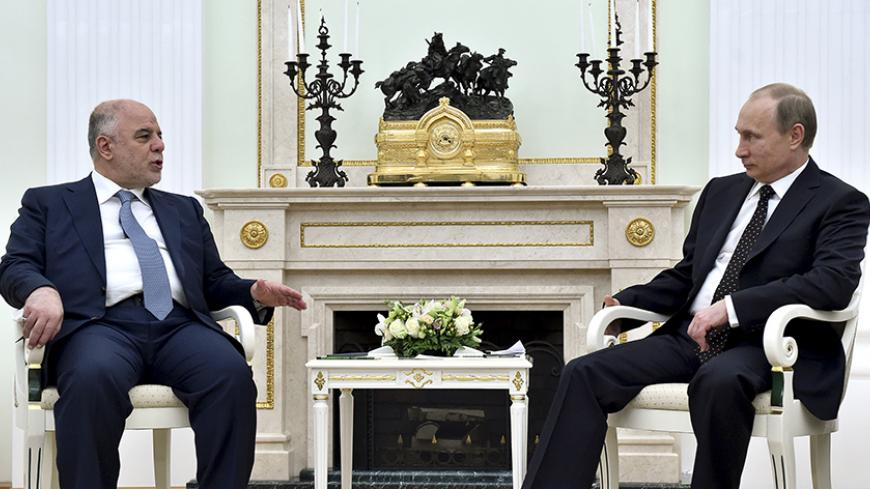 The conflicts in Iraq and Syria are becoming increasingly convoluted by the day. Russia's engagement has been an additional complication to the overlapping battles.

This international interference is undoubtedly a major challenge to the regional countries, whose security, political composition and political undertakings are vulnerable, as is the fragile concept of citizenship within their borders.

Iraq is one of those weak countries in the region that did not deal with the developing situation in a way that would protect its interests and distance it from repercussions of the religious conflict raging between the major countries in the Middle East.

The Iraqi joint operations command (covering the army, Popular Mobilization Units and internal security forces) said in a statement Sept. 27 that Iraq has signed security and intelligence agreements in coordination with various countries as part of the fight against the Islamic State (IS). The countries include disparate parties such as Russia, Iran, Syria, Egypt, Turkey, Jordan, Germany and France, in addition to members of the US-led coalition against IS, in which 60 countries are participating.

The press office of Prime Minister Haider al-Abadi said Sept. 30 that Iraq, Syria, Iran and Russia agreed to set up a joint information center in Iraq. Russian airstrikes against Syrian opposition forces coincided with that announcement.

On Oct. 1, Russian Foreign Minister Sergey Lavrov announced his country was ready to carry out air raids on IS positions in Iraq as well. Lavrov had said May 21 that Russia would meet Iraqi, Syrian and Egyptian demands for Russian support to expel terrorists from their territories.

As the Russian raids started Sept. 30 in Syria, Iraqi MPs demanded that Abadi officially call on Russia to carry out airstrikes in Iraq as well. However, the United States issued an ultimatum Oct. 20 that Iraq must choose between support from the United States or Russia.

Iraqi Defense Minister Khaled al-Obeidi had visited Moscow on Aug. 31 to reach security agreements and sign arms deals with Russia to restructure the Iraqi army. Russia indeed expressed during the meeting its readiness to provide new weapons to Iraq, including bombers.

Although some political parties and citizens have demanded that Iraq's military and security cooperation with Russia be extended to the point of becoming an alliance, it is not easy for the Iraqi government to make such a decision. There is no internal agreement between the political partners, and Iraq also is cautious about falling into the ongoing polarization and conflicts in the region and subsequently losing US support if Iraq further allies with the Russians.

In terms of internal reactions, the Sunni National Forces Union said Oct. 8 through MP Abdel Qaher al-Samarrai, “The new quartet alliance may confuse the political process and produce overlapping between major powers in the Iraqi arena and lead to tension between some countries in the region such as Turkey, Saudi Arabia, Kuwait and Jordan toward this alliance.”

So far, Abadi seems to have resisted the pressure placed by Shiite forces and parties, such as the Popular Mobilization Units that announced Sept. 20 that “the Baghdad-Damascus-Tehran-Moscow alliance is a natural and legal right for Iraq.” These forces stressed the need for full participation in the Russian alliance and to speed up the official request that Russia take part in attacks on IS in Iraq.

Yet Abadi is taking his time and does not want to risk his relations with the West at this sensitive stage. He has contented himself with the intelligence cooperation and arms deals with Russia, and he has refrained from going beyond this point to avoid losing the United States as a strategic ally of Iraq.

Abadi is reasonable in being cautious, because the Iraqi political situation is vulnerable and would not tolerate further internal divisions, which would take place in the event of a radical change in the Iraqi international alliances. In addition, Abadi does not perceive the new Russian alliance as a guaranteed alternative to the Western one, and he does not desire that Iraq be turned into a field for a new battle between the world powers, which would lead to dire consequences.

At the same time, Abadi does not believe he can manage without an external party to help Iraq restore its territorial integrity and get rid of IS. This is particularly true in light of Russia's strong participation in fighting IS and US confirmation that the fight will be long.

As a result, Iraq faces a major challenge of how to organize its international relations in the war against terrorism. This challenge may lead to more effective options for Iraq if Abadi is able to deal with the US-led coalition and Russian alliance in a harmonious and noncontradicting context. This would serve as a starting point for a comprehensive solution in the region in the not-too-distant future.

Such an opportunity is possible in light of the common challenges that all international parties are facing with terrorist organizations in the region. US President Barack Obama implied in his opening address at the counterterrorism summit Sept. 29 in New York that US-Russian cooperation is possible. Obama expressed a US willingness to work with Russia and Iran to settle the war in Syria, and he pointed out that IS can be defeated if international and regional conflicting parties can reach a political agreement.

In light of the complex landscape, Iraq must use its foreign diplomacy and awaken a US and Russian desire to work together against IS, so that Iraq can avoid a new conflict between the US-led coalition and Russian alliance.

Yet such a task requires that Iraq use its capabilities, in regard to its historic importance and engagement in the regional crises and priorities, to produce a US-Russian meeting point.

Questions remain: Why hasn't Iraq assumed such a role in the conflicting interests among Iran, Turkey, Saudi Arabia and the Gulf states? How can it achieve a complex consensus such as a US-Russian agreement?

Those are logical questions, but they do not take into account that the facts on the ground in the region have changed since IS emerged as a regional and international threat, and that the mentality of the Iraqi governing system has also changed under Abadi's administration, which has been attempting to find common ground for dialogue.

The ball is in Iraq's court, even though observers assume otherwise. Iraqi leaders are concerned that their country could be turned into an arena for dangerous international conflict, or into a place for negotiations between the different conflicting parties. Iraq's internal political disputes, should they remain, will lead to the failure of the war on terrorism and undermine any chance to garner support from major countries in the ongoing war against IS in Iraq.