US should test Russia on Islamic State

With the complicated regional dynamics of the Syrian war, the US could benefit from Russian assistance. 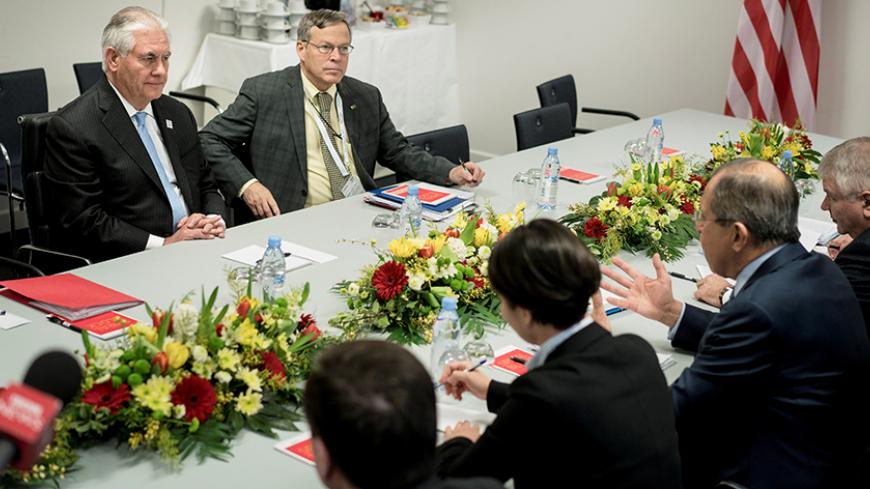 US Secretary of State Rex Tillerson (L) listens to Russian Foreign Minister Sergey Lavrov (2nd R) at the start of a meeting at the World Conference Center in Bonn, Germany, Feb. 16, 2017. - REUTERS/Brendan Smialowski

US Secretary of Defense James Mattis said Feb. 16 that while the US is “not in a position right now to collaborate on a military level” with Russia, “our political leaders will engage and try to find common ground or a way forward.” Secretary of State Rex Tillerson, meeting on the same day with Russian Foreign Minister Sergey Lavrov, added that “the United States will consider working with Russia where we can find areas of practical cooperation that will benefit the American people.”

This is a worthy approach. The Islamic State (IS) poses a long-term insurgency and terrorism threat to Russia and the West, even as the territory it controls is diminishing. If the Trump administration is considering sending US ground forces to Syria to enforce safe zones or help take Raqqa, IS’ capital in Syria, this would represent a significant military escalation. Given the murky and complicated regional dynamics of the Syrian war, the US might benefit from a Russian assist.

In meetings in Moscow this month as part of a Track II delegation organized by the Center for the National Interest, Russian officials and foreign policy experts suggested that the fight against IS is both a shared interest and a way to improve ties with the West. Relations have declined sharply since 2014, when Russia annexed Crimea and launched a war in eastern Ukraine.

American officials have in the past charged that Russia’s military has been a paper tiger in dealing with IS in Syria. This is mostly true. Syria and Russia have picked their spots in battling IS. Russia’s priority has been to prevent the collapse of the Syrian government, which, if it led to Libya-like chaos, would harm US interests as well. Russia also has a strong interest in leveraging its support for the regime of Syrian President Bashar al-Assad into a secure long-term position in Syria, which already involves a major air base and naval facilities that underpin Russia’s position in the eastern Mediterranean.

So, yes, Russia could do more against IS. And there is a shared interest in defeating Jabhat Fatah al-Sham, al-Qaeda’s Syrian affiliate. The Obama administration actually came to the same conclusion. In September, former Secretary of State John Kerry and Lavrov worked out an agreement for US-Russia intelligence and military coordination, which was scuttled after US warplanes inadvertently killed Syrian forces battling IS in Deir ez-Zor.

Progress toward a long-term political solution to Syria could benefit from US-Russian coordination. Moscow holds more of the diplomatic cards following the Syrian government’s victory in Aleppo, launching new security talks with Turkey and Iran and floating proposals for a new Syrian constitution. The US has no influence with Syria and Iran, and US-Turkish relations are strained over US support for the Syrian Kurds. Russians understand, however, that the diplomatic process cannot succeed without US participation and leadership. Only Washington can bring along European and Gulf allies and the Syrian Kurdish parties. All must eventually be part of any enduring cease-fire and political solution, not to mention as a source of financing for the reconstruction that will be needed.

Even if the US were willing to consider partnership with Russia, would such cooperation serve the long-term interests of both countries? Russia’s interests in Syria are linked to those of the Assad regime and Iran. The Trump administration is reportedly considering new means of challenging Iran in the region. Based on recent conversations in Moscow, an emerging US hard line on Iran could be an impediment to US-Russian coordination in Syria and the greater Middle East.

What the US should not do is get sucked into another regime change misadventure, as happened in Iraq and Libya. Safe zones and more US ground forces are significant military escalations and loaded with risk. And the consequence of turning up the heat on Iran, which has extensive military and intelligence assets in Syria and no intention of exiting, will likely lead to more war and a potentially failed state.

If Russia is willing to cooperate with the US-led coalition in the fight against IS and al-Qaeda, and help end Syria’s civil war through a UN-brokered process, it should be welcomed. This collaboration would be a handshake between Russia and the West, not an embrace, and it would be a good place to start, given the current poor state of relations.