Despite US strikes, Moscow still wants to work with Washington on Syria

Though the Russians continue to protest US strikes on Syrian government forces and pro-government paramilitaries, the Kremlin is unlikely to respond as long as it remains focused on cooperation with Washington. 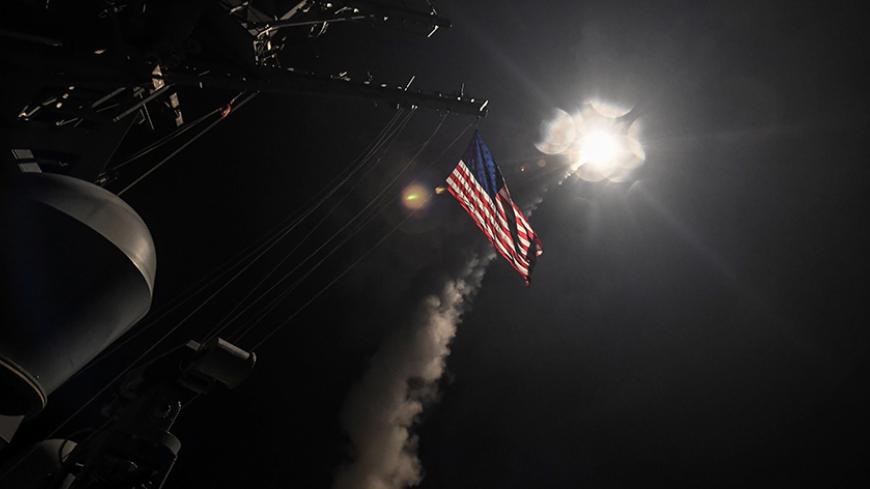 The US Navy guided-missile destroyer USS Porter conducts strike operations while in the Mediterranean Sea, which the US Defense Department said was part of the cruise missile strike against Syria, April 7, 2017. - Ford Williams/US Navy/REUTERS

While Russian officials have vocally complained about the Donald Trump administration’s increasingly frequent strikes on government forces and pro-government paramilitaries in Syria, the Kremlin remains focused on cooperation with Washington and is unlikely to respond to US actions as long as that is the case. If the US administration’s objective is to establish greater credibility in Syria to deal with Moscow from a position of strength, as Trump and other US officials have said, it may be working, at least so far.

In addition to striking a Syrian air base with cruise missiles in April in what US officials called a punitive response to Syria’s use of chemical weapons, the United States conducted air attacks on pro-government troops in May and June. US officials described the latter actions as necessary to protect “coalition and partner forces” in At Tanf, near Syria’s border with Iraq.

In April, a Kremlin spokesperson said the cruise missile attack, a major departure from the Barack Obama administration’s restraint in confronting Syria’s government, was a “significant blow” to US-Russia relations. Moscow simultaneously — but temporarily — suspended an agreement on deconflicting US and Russian air operations in Syria. More recently, Foreign Minister Sergey Lavrov has refused to recognize US “deconfliction zones” in Syria and denounced the repeated airstrikes as violations of international law. Russian defense officials have referred to US assertions that pro-regime forces threatened American partners as “absurd.” Despite this, and notwithstanding Lavrov’s personal expression of concern to Secretary of State Rex Tillerson, American-Russian discussions of Syria seem to have continued largely undisturbed. In fact, US officials privately refer to this one as perhaps the only area in which continuous dialogue is taking place between the two countries.

Why is Moscow continuing efforts to work with the United States despite these strong public positions? According to Dmitry Suslov, a Russian expert on American foreign policy at Moscow’s Higher School of Economics and the Council on Foreign and Defense Policy (analogous to the US Council on Foreign Relations in representing the foreign policy establishment), Russia’s arguments about international law are mainly diplomatic, intended to win sympathy for Russian policy from others — including in Europe, where the Kremlin sees growing frustration with the Trump administration — and to deflect attention from US and Western charges that Russia has violated international law. As Suslov explained to Al-Monitor, “There is a full recognition that international law matters little for the Trump administration.”

Beyond this, Suslov argued, Russian officials do not believe that the United States is likely to increase its military commitment in Syria substantially and do not see US intentions to either begin a general war on the Syrian government or oust Syrian President Bashar al-Assad. Instead, he said, Moscow views the attacks as “a political pressure campaign” to establish greater credibility on the ground in Syria in advance of “serious US-Russian negotiations” — something Suslov colorfully characterized as a form of “artillery preparation” before the real battle, meaning “tough negotiations.” Suslov, who is also a program director at Russia’s Valdai Foundation, suggested that Russia’s government sees three other US motives: seizing the initiative in Syria from Russia, encouraging pro-Assad troops to fight the Islamic State (IS) rather than the forces under US protection and “showing that [Trump] is tougher than Obama” to American domestic audiences.

Seen from Moscow, Suslov said, these policies are “not friendly” but nor are they sufficiently “hostile or irritating” to preclude US-Russia talks. Perhaps most important, the Trump administration’s approach is “not a grave threat to Russia, since it is not perceived as being aimed at ousting or destroying [the] Syrian regime by force or at pushing Russia out of Syria.” This perspective, amid hopes that a negotiated solution may be possible, is why Russia has responded only rhetorically to America’s increasingly assertive actions in Syria.

Suslov said that Russian officials perceive the Trump administration as “absolutely” more credible than the Obama administration in its approach to Syria. “These strikes prove that the Trump administration is not ready to sacrifice its allies (both Kurds and Sunni Syrian non-IS and partly non-[Jabhat al-] Nusra opposition) and is serious in pursuing the goals the administration has defined for itself in Syria beyond destruction of IS (limiting Iran’s presence and influence, preventing [the] regime’s ‘victory,’ consolidating zones liberated from [IS] and not controlled by the regime, retaking military and political initiative back from Russia).”

To the extent that this perspective has truly taken hold in Moscow, the Trump administration’s approach to the long and bloody Syrian conflict may be working so far. The ultimate test will lie in the administration’s ability to convert its new credibility and initiative — the position of strength Trump has sought to create — into a successful diplomatic outcome that protects and advances US interests in Syria and the Middle East, satisfies American public opinion (including at least some of the president’s critics) and works with US allies, partners, rivals and foes to produce a sustainable peace. It is a big job, especially at a time of extreme polarization in the United States, but it is not impossible.