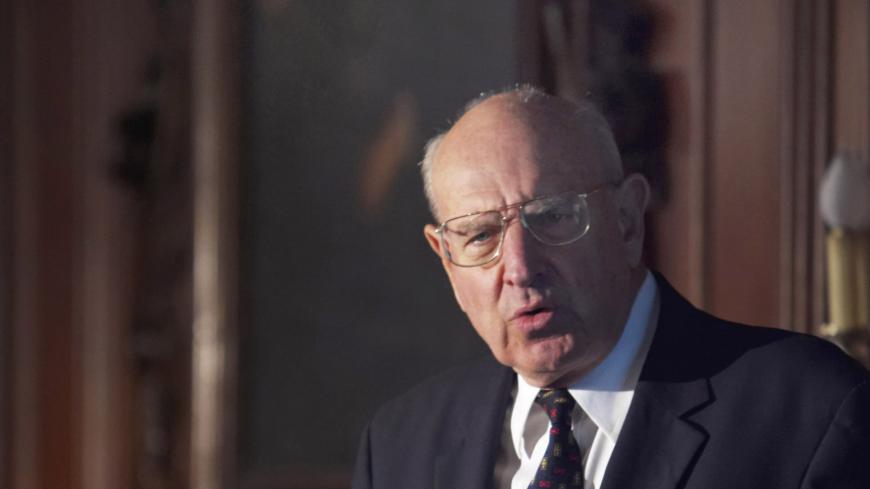 Among the members of the board of the Arab Gulf States Institute is former US Ambassador Thomas Pickering, seen here speaking at the International Economic Alliance Global Investment Symposium in New York, Sept. 24, 2008. - REUTERS/Jacob Silberberg

A new think tank funded entirely by UAE and Saudi sources makes its Capitol Hill debut Oct. 6 with a Senate hearing on the crisis in Yemen.

The Arab Gulf States Institute in Washington (AGSIW) bills itself as an independent institution dedicated to covering the “social, economic, and political diversity of the Arab Gulf states.” Its executive vice president, former Ambassador to Yemen Stephen Seche, is slated to testify before the Senate Foreign Relations Committee.

Seche appears to have been selected mainly for his expertise as America’s man in Sanaa in 2007-10 and later as deputy assistant secretary of state for Near Eastern affairs. Middle East policy watchers in Washington, however, are expected to also pay close attention to the tone set by the institution in its maiden appearance before Congress amid growing concerns that the Gulf petro-states may be buying influence at some of the nation’s leading policy research institutes.

“Organizations in Washington, DC, cover the Arab Gulf states on a sporadic, often crisis-driven basis, usually in the context of the energy sector, terrorism or conflict with Iran,” the Arab Gulf States Institute explains on its website. “AGSIW plans to fill the gaps and provide sustained, in-depth analysis on the social, cultural, economic, and political profiles of the countries of the GCC [Gulf Cooperation Council] and issues of concern to the region and the United States.”

To its credit, the organization acknowledges that its sole sources of funding so far have been a think tank in Abu Dhabi and the Saudi Embassy in Washington, though it is looking for private sector support “to further diversify funding.” The organization received $2.6 million in contributions last year, according to tax records.

The donations are raising eyebrows following reports in The New York Times and elsewhere that the United Arab Emirates, Qatar and other countries are seeking to buy influence at prestigious US think thanks such as the Brookings Institution, the Atlantic Council and the Center for Strategic and International Studies. And a recent Huffington Post profile of UAE Ambassador to Washington Yousef Al Otaiba linked the diplomat to former US Ambassador to Egypt Frank Wisner, who serves as chairman of the Arab Gulf States Institute’s board. Wisner is now a paid consultant for Saudi lobbyist Squire Patton Boggs, although he’s only registered as working on Kosovo issues.

The institute is the brainchild of Egyptian academic Abdel Monem Said Aly, a staunch defender of President Abdel Fattah al-Sisi. Said Aly’s role as founding director and honorary chairman has raised concerns that the institute may shy away from criticizing the Gulf states’ autocratic governments and human rights abuses.

Those expecting the think tank to toe the Gulf line, however, are almost sure to be disappointed.

For starters, the institute will be responsible to a board stacked with high-powered retired US ambassadors, including AGSIW President Marcelle Wahba and Thomas Pickering, as well as former NATO chief Anders Fogh Rasmussen. And the institute recently hired Kristin Smith Diwan, who has not hesitated to highlight the Gulf states’ lack of accountability and aversion to dissent, as one of three senior resident scholars.

But it may be Seche himself who most clearly proves skeptics wrong during his testimony Oct. 6.

The ambassador has long cast doubt on Saudi allegations that Iran plays a major role in arming the Houthi rebels, with leaked diplomatic cables from his time in Sanaa suggesting weapons likely came from corrupt Yemeni military officials. And Seche hasn’t let up in his skepticism of anti-Iranian allegations since leaving the State Department, telling The New York Times that Houthi ties to Iran had been overstated by Gulf nations.

“The Saudis and the Sunnis have made this a sectarian issue,” he reportedly told the Times in March. “This military campaign is the Sunni world saying to Iran: Get out of our backyard.”