Four ministers secretly warn Rouhani about the economy, but why?

Four ministers wrote a letter to President Hassan Rouhani warning him that the economic situation in Iran could lead to a serious crisis. 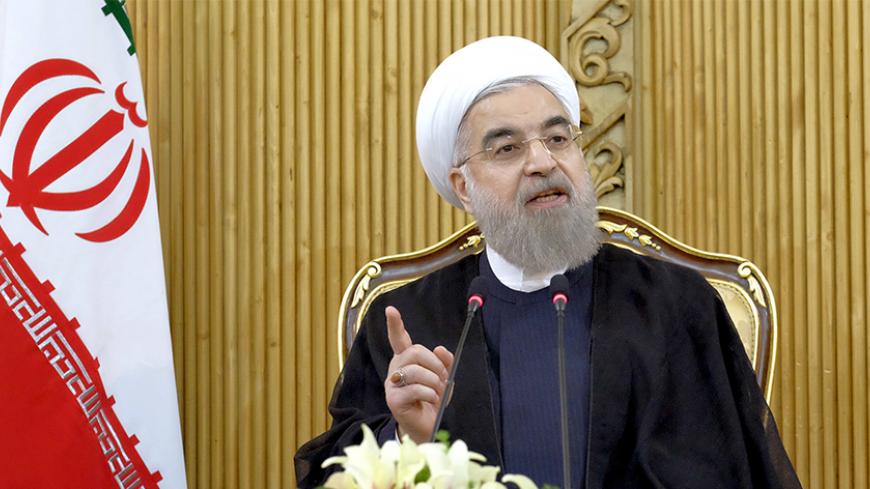 Four ministers from the administration wrote a letter to President Hassan Rouhani warning him that Iran’s economic situation could turn into a “condition of crisis” that would take many years to recover from. The most surprising signature on the letter was that of Defense Minister Brig. Gen. Hossein Dehghan, who is not known to get involved in nonmilitary matters.

The letter, which was published by Mehr News Agency Oct. 4, was dated Sept. 9. It was also signed by Ali Teyebnia, minister of economy and finance; Mohammad Reza Nematzadeh, minister of industries and business; and Ali Rabiei, minister of labor. The publication of the letter has led to a wide range of commentary and questions in Iranian media.

The letter stated that there are eight reasons for the “rare decline” in Iran’s economy, such as sanctions and the drop in oil prices, but added that “uncoordinated decisions and policies” of various governmental agencies is the primary reason for the current economic situation.

After the letter was published in the Iranian media, Teyebnia told Iranian television that upon receiving the letter, Rouhani had ordered officials “to review again the capital market situation and [state] of the economy and for new polices to be created when necessary.”

Shargh daily asked why the four ministers would write to the president to address issues for which they themselves are responsible. According to experts who spoke with Shargh, the letter was meant to serve as a warning to Iranian parliamentarians to vote in favor of implementing the final nuclear agreement. Iranian officials opposed to the nuclear agreement, which would remove economic sanctions in return for reduced nuclear activity, have argued that Iran can pull itself out of its current economic situation by relying on domestic production rather than international markets.

Zahrah Karimi wrote in Shargh daily that the defense minister’s signature on the letter suggests that it was a message to Iranian officials and agencies that if the economic situation worsens or is not improved, it could lead to a security crisis for the country, either through mass migration or mass poverty.

Fars News Agency was less sympathetic in their interpretation of the letter. Amir Tavana wrote that exactly a year after Rouhani claimed that Iran had left its economic slump, four ministers warn that the slump could turn into a crisis. On Sept. 6, 2014, Rouhani told an audience in Mashhad, “Today we can announce that thankfully we have passed through the recession.” Tavana wrote that with this letter, Rouhani’s comments in Mashhad had been undermined. He also asked why the public was not informed that four ministers, three of whom are in charge of economic matters, had written a letter warning about an economic crisis.

Mehr News, which broke the story, wrote that some of the important messages to take away from the letter is that Rouhani has to decide if he wants to run the economy through special channels or through his ministers. The article also stated that the letter serves as a reminder to Rouhani that the country is still not experiencing economic growth and that there are many domestic issues plaguing Iran’s economy.

While Rouhani’s economic team has been able to drop inflation from 40% to 15%, there are still major problems that have been unaddressed since Rouhani took office two years ago.