Iranian President Hassan Rouhani has made changes to two vice presidential positions, but the move did little to reassure those watching the economy continue to decline. 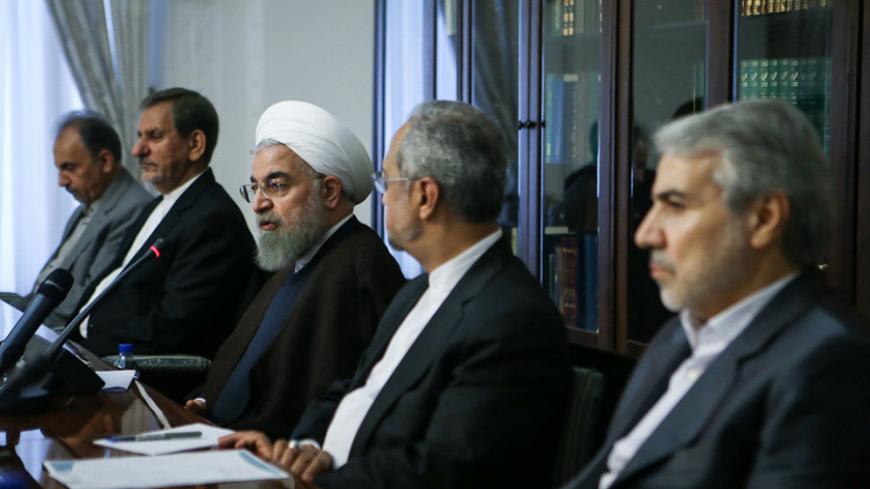 Two important political figures who have been supportive of President Hassan Rouhani's domestic and foreign policies have begun to sound the alarm on the country’s economy and lingering issues with the comprehensive nuclear deal between Iran and six world powers. In an interview on Iranian television July 14, parliament Speaker Ali Larijani said, “At the moment, the economic downturn in the country is very serious.” The day before, Expediency Council head Ayatollah Ali Akbar Hashemi Rafsanjani, who has been an advocate of improved relations with the United States, said the American side has broken promises in the removal of sanctions.

The statements by the two Rouhani allies made headlines in conservative media outlets, which have been hammering the president for his inability to deliver on his economic promises. In his latest address, Rouhani defended the nuclear deal, arguing that the alternative would have been more sanctions and possibly even war. Had there been no deal, “today the sale of oil would be at zero,” Rouhani said at the one-year anniversary of the agreement's signing.

Reformist Shargh Daily reported, “There still has been no special or clear reason stated by the administration for the changes.” Vakil-e Melat reported that in his final year in office, Rouhani finds himself caught between conservative critics who are using the country’s economic situation to attack him and Reformists who want changes within the Cabinet. Ansari, a Reformist political figure, had recently criticized the president’s media team. Vakil-e Melat reported that pressure within the administration to close ranks was responsible for Ansari’s demotion, and that more changes are coming.

Two possible post changes circulating in the media are that of Minister of Economic Affairs and Finance Ali Teyebnia and Rouhani’s brother, Hossein Fereydoun. In May, Reformist media outlets reported that Fereydoun, a special adviser to the president, had been absent from Cabinet meetings and important functions for two months. Fereydoun surfaced shortly after the article was published, but he has continued to be the subject of various controversies. According to Shargh Daily, conservative parliamentarian Javad Karimi-Ghodousi most recently accused Fereydoun of impersonating the president over the phone and ordering the importation of illegal goods. Karimi-Ghodousi also accused Fereydoun of using his government access to purchase land on Kish island at a discounted price and sell it at a high profit in the private market. Others have tried to link Fereydoun to the exorbitant salaries of the heads of banks and government institutions, the subject of a recent scandal in Iran.

Nasser Seraj, the head of the General Inspection Organization of Iran, which operates under the direction of the judiciary, spoke on Iranian television about the salaries issue. Seraj said that after the removal of nine directors and managers of banks and insurance institutions over the scandal, Teyebnia is “under pressure.” Seraj’s comment made a headline in the Javan newspaper, which is linked to the Islamic Revolutionary Guard Corps. While Teyebnia has apologized, even Reformist newspaper Arman Daily called on Teyebnia to resign, holding that this is “not a simple issue to forget about with an apology or the removal” of the heads of banks.

If he intends to run successfully for a second term, Rouhani has little time to turn the economic situation around with the presidential elections just 10 months away.