Why hasn't Sisi visited Washington yet?

US-Egyptian relations have recently been following what could be described as a downward path — ever since Abdel Fattah al-Sisi took office in 2014, he has not received an official invitation to visit Washington. 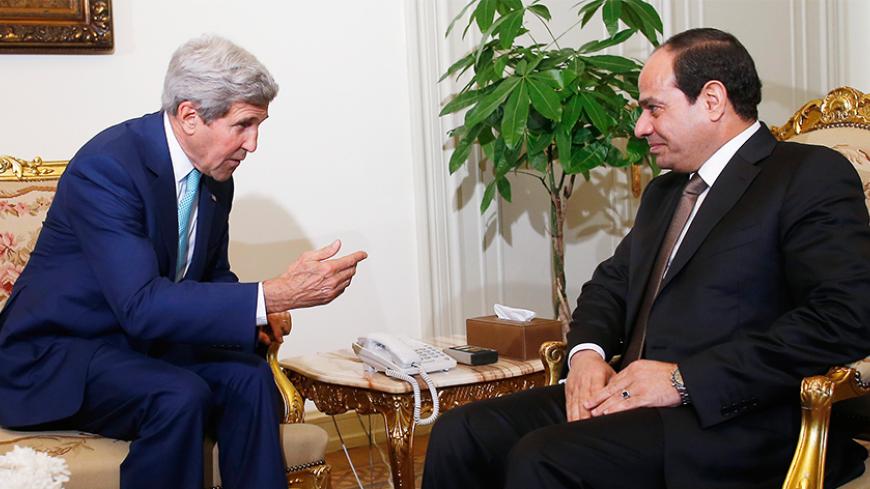 CAIRO — Ever since Egyptian President Abdel Fattah al-Sisi took office on June 8, 2014, US-Egyptian relations have been deteriorating. This has been further confirmed by the fact that Sisi has not visited Washington yet despite the shuttle visits he has made abroad.

Differences and conflicts plagued the US-Egyptian relationship during the era of President Gamal Abdel Nasser. These conflicts culminated in the 1967 Six-Day War, when diplomatic relations between the two countries were severed because of the economic and military support by the United States to Israel.

However, these relations started to take a positive turn based on the strengthening of the strategic interests shared between the two countries in the wake of the signing of the Camp David Accords with Israel — the US’ permanent ally — on Sept. 17, 1978, between Egyptian President Anwar Sadat and Israeli Prime Minister Menachem Begin, as per the State Information Service affiliated with the Presidency of the Republic.

Only one meeting was held between Presidents Sisi and Barack Obama on the sidelines of the 69th Session of the UN General Assembly in September 2014 in New York, but other than this the two presidents have been settling for phone calls to discuss the latest developments in the region.

According to The Washington Times, Obama refused to meet with Sisi on the sidelines of the 70th session of the UN General Assembly. Egyptian Foreign Minister Sameh Shoukry attributed this in a press statement on Sept. 24 to the mismatching agendas and schedules of the two presidents, which prevented them from holding individual talks.

According to the US Embassy in Egypt's reports on the situation in the country following the revolution of June 30, 2013, Washington started a “comprehensive review” of its relations with Egypt on the background of the ouster of former Egyptian President Mohammed Morsi.

On Aug. 15, 2013, following the killing of hundreds of Muslim Brotherhood demonstrators in Al-Nahda Square and Rabia al-Adawiya Square, Obama announced the cancellation of the Bright Star maneuvers, which were launched in 1980 following the signing of the peace treaty between Egypt and Israel and consisted of a joint military exercise between the two countries.

By October 2013, the review of relations put a halt to the deal consisting of delivering arms to Egypt. Also in October 2013, the US administration suspended $260 million that was going to be directly transferred to the Egyptian government along with another $300 million in US loan guarantees.

However, in a telephone call on March 13, Obama told Sisi that the military aid amounting to $1.3 billion would continue.

Meanwhile, Dina Badawi, spokeswoman for the US State Department for the Middle East, expressed concerns in a live interview on the ONtv channel April 2 over the state of rights and freedoms in Egypt, and pointed out that aid is aimed at continuing the democratic track and the political reforms in the country.

Abdel Moneim Said, director of the Regional Centre for Strategic Studies, and Shai Feldman, the Judith and Sidney Swartz director at the Crown Center for Middle East Studies, said in a research paper titled “Resetting US-Egyptian relations," which was published in March 2014 on the center’s website, that at the root of the downturn in the US-Egyptian relations is the huge gap between the two sides’ narratives regarding the events of June 30, 2013.

One of the most important issues that may hinder the return of US-Egyptian relations to their previous state is the strong relationship between Cairo and Moscow; Sisi has met his Russian counterpart Vladimir Putin four times so far, and Egypt is currently considered the most important ally of Moscow in the Middle East.

The dispute between Russia and the United States is in regard to several issues. Chief among these is the Syrian issue; Moscow launched airstrikes on Sept. 30, sparking criticism on the part of Obama during a press conference Oct. 2. Obama said that Moscow is acting “not out of strength, but out of weakness” in support of the losing party. The president was referring to Syrian President Bashar al-Assad, and he pointed out that Russia should help in reaching a political settlement.

Meanwhile, the Egyptian Foreign Ministry did not issue any statements condemning or supporting such strikes.

In January, spokeswoman for the US State Department Jennifer Psaki said during the daily press brief that a meeting she described as “routine” was held with a delegation of members of the former Egyptian parliament from the dissolved Muslim Brotherhood-affiliated Freedom and Justice Party, on the sidelines of their visit to Washington, which was organized and financed by Georgetown University in Washington.

This meeting raised the ire of the Egyptian political leadership, as well-informed sources told Reuters in June that the Egyptian government summoned the US ambassador in Cairo to express displeasure over visits to Washington by figures of the Muslim Brotherhood, which is banned in Egypt.

Concerning the fact that Egypt did not extend an official invitation to Obama to meet with Sisi, or vice versa, Atef el-Ghomri, former director of the office of the Egyptian Al-Ahram newspaper in Washington and a member of the Egyptian Council for Foreign Affairs, said, “There is an ongoing split within the US decision-making circles over the revolution of June 30, 2013, and the toppling of former President Mohammed Morsi, who belongs to the Muslim Brotherhood.”

Ghomri told Al-Monitor that over the past years, Egypt’s relations have been confined to its foreign relations with Washington as it only took into account its regional and international interests. This deprived Egypt of any international initiatives or insights about various issues. Also, Egypt had to give up its pivotal role in the Middle East as far as the African and Arab countries are concerned. This negatively affected Egypt over time.

“The Egyptian leadership is trying to diversify its foreign relations. It resorted to the Eastern bloc led by Russia, as well as East Asia represented by China and Singapore.” Ghomri added.

Washington is concerned about several files managed by the Egyptian leadership, mainly the human rights and political reforms issues. The United States has been expressing those concerns since the June 30 Revolution, when the Muslim Brotherhood was toppled and replaced by a military president.

Under such circumstances, Cairo had to resort to other countries, while the US-Egyptian relations are expected to witness further tension, especially with the differences in views concerning several international issues, namely Syria, Iran and Libya.