Egyptian politicians accuse US of violating rights in Ferguson

Egyptian authorities are calling for an investigation into the US' alleged violation of the right to peaceful protest, when US police forces used excessive force against demonstrators in the city of Ferguson, Mo. 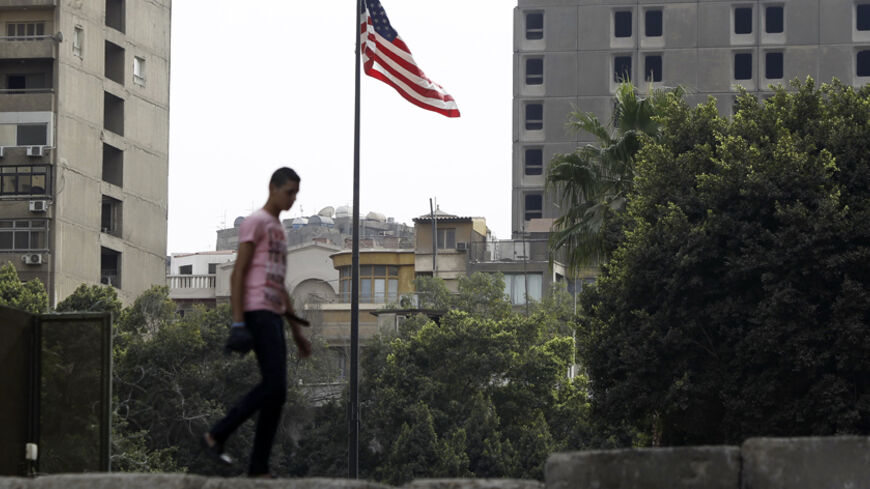 An anti-Mohammed Morsi protester walks on a wall built by police to prevent clashes between protesters and police along a road that leads to the US Embassy, in Cairo, Nov. 29, 2012. - REUTERS/Amr Abdallah Dalsh

CAIRO — A new crisis is looming for US-Egyptian relations after Cairo officials verbally attacked US authorities, accusing them of violating human rights during protests in Ferguson, Mo. Protests were staged in a number of US states following a Missouri grand jury's decision not to indict a police officer who killed Michael Brown, a young African-American man.

This comes after a period of strained relations between Cairo and Washington following the fall of the Muslim Brotherhood and the Egyptian authorities' dispersal of Mohamed Morsi supporters at sit-ins at Rabia al-Adawiya and Nahda squares. Washington adopted punitive measures against the Egyptian army as a sign of opposition to what it deemed violations of peaceful protesters’ rights, even announcing the suspension of a large portion of military aid.

The new tension in US-Egyptian relations comes in light of a rapprochement between Cairo and Moscow, with the announcement of a planned visit to Cairo by Russian President Vladimir Putin.

Egyptian politicians called for the formation of an Egyptian fact-finding committee to track what they called breaches by US authorities against protesters in Ferguson. The Egyptian Foreign Ministry issued an official statement criticizing US police treatment of protesters in the wake of the grand jury decision not to make an indictment. The statement further called on US authorities to observe self-restraint and to respect the right of individuals to peacefully assemble. Moreover, Egyptian Interior Ministry spokesman Hani Abdel Latif said US police used excessive force against peaceful protesters as if they were dealing with arms dealers.

The US State Department refused to compare the human rights situation in the United States with the oppression in Egypt. State Department spokeswoman Marie Harf, in her response to Cairo, said that Americans enjoyed a level of freedom of expression that Egyptians do not, and that it was enough for Washington to address its problems with transparency.

The US media treated Egypt's criticism of human rights conditions in the United States as political scolding, considering that the Egyptian Foreign Ministry's statement employed language similar to that used by the United States, when the latter had urged Cairo to use restraint in dealing with the Brotherhood protesters.

Human rights organizations around the world have the right to monitor breaches in any country, according to Tahani al-Gebali, former vice president of Egypt's Supreme Constitutional Court. Gebali told Al-Monitor that she supported the formation of an Egyptian fact-finding committee to review the human rights situation in Washington.

“The Egyptian committee might include prominent international figures like international criminal judges and figures. We have the necessary competence to achieve this legal task, to investigate the violations of the US authorities of the peaceful protesters of Ferguson,” Gebali said.

When asked whether the proposal to form this committee was prompted by past US criticism of human rights conditions in Egypt, Gebali said, “The situation was different in Egypt, as there was a revolution and a change of rules. As a result, the US’ leaning toward the Brotherhood, which was toppled by the revolution, created doubts about the intentions of US organizations.”

“This does not imply the return of American-Egyptian relations to the way they used to be. On the contrary, it serves the rapprochement between Egyptians and Americans because the people are the ones who triumph in the end. This relationship will live on, while governments change and regimes fall,” she said.

Journalist and politician Mustafa Bakri, who put forth the proposition to form an Egyptian fact-finding committee, told Al-Monitor by phone, “We witnessed human rights breaches against the American people during the recent protests. Even the jury could not issue a verdict incriminating the officer who was accused of murdering a black citizen. This showed public opinion that there is meddling in the US judiciary.”

Bakri believes that Egyptian human rights organizations, including the National Council for Human Rights, should form a committee to listen to testimony and verify the facts. Bakri wondered, “Will Washington allow this committee to do its job or not?”

Bakri said that the Egyptian fact-finding committee is not a form of retaliation against the United States for criticizing Egyptian human rights abuses, but that it stems from the awareness of certain American realities under the current president.

Manal al-Tibi, a member of the National Council for Human Rights, told Al-Monitor that the organization was not ready to give up its domestic responsibilities in Egypt to monitor human rights abroad. She said, “The people calling for forming this committee are definitely playing political games, to transmit a retaliatory message to the US system and human rights organizations as a response to their repetitive criticism for the human rights situation in Egypt lately.”

“As a human rights activist, I certainly do not accept that the US police deals with protesters this way, although I do not know the circumstances of [not indicting] the US police officer accused of killing a black man. However, this is a clear case of racism, and there are many black citizens suffering from discrimination,” she said.

Egypt's criticism of US human rights violations comes as a political message — Cairo is returning the same blow that Barack Obama’s administration and civil society organization leveled against it after June 30.