Could climate change send Egypt 'sinking into the sea'?

Although officials show interest in the issue of climate change and its impact on Egypt’s water and food security, the government has yet to take practical measures to address potential repercussions. 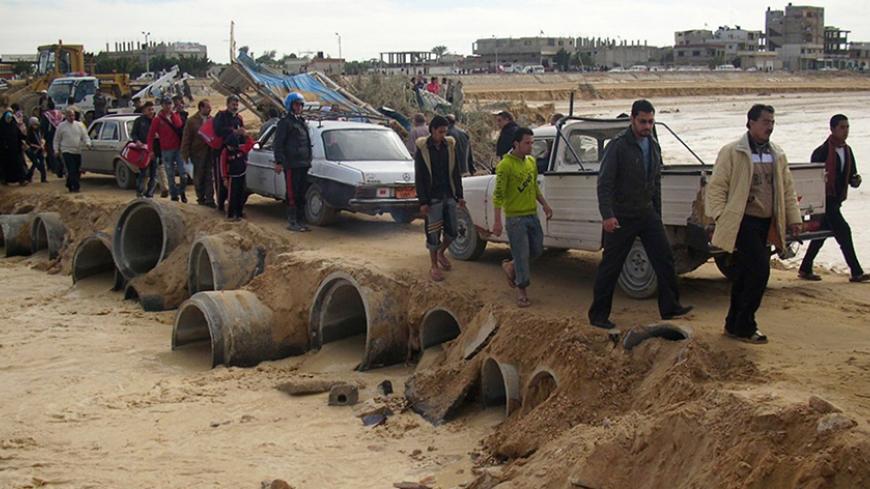 Egyptians walk through a makeshift bridge due to flooding in the northern city of el-Arish, Sinai Peninsula, Jan. 21, 2010. - REUTERS

CAIRO — In addition to the political, economic and social problems plaguing the people of the Middle East and Africa, climate change was also on political leaders’ agenda during the UN meeting Sept. 25 in New York. The issue was given a great deal of attention, amid mounting warnings by scientists that the potential risks posed by climate change need to be addressed.

Climate change draws the attention of Egyptian politicians from time to time, particularly in terms of the risks posed to water and food security. During a Sept. 26 meeting of the Committee of African Heads of State and Government on Climate Change in New York, Egyptian President Abdel Fattah al-Sisi called for a joint African stance on climate change to be submitted to the UN Climate Change Conference, which will be held in France in December.

Environment Minister Khaled Fahmy told Al-Monitor, “Egypt did not have a major role in the negative environmental impact, as it contributes to only 0.5% of the world total carbon dioxide [C02] emissions. Nevertheless, it is among the countries that are most at risk of sinking into the Mediterranean Sea.”

Fahmy added, “Based on Egypt’s aspirations [to increase] economic development, the government’s stance in the international negotiations on climate change tends to focus on solutions to adapt to the climate change impact, while not committing to the decisions and actions to reduce C02 emissions,” which are included in the UN Framework Convention on Climate Change.

Egypt is participating in international negotiations by speaking on behalf of the African continent. Yet, official Egyptian measures, decisions and studies to adapt internally to climate change risks are not that serious and do not measure up to the size of the globally contentious issue, environmental experts say.

Mohamed Ateia, a water researcher at the Tokyo Institute of Technology, told Al-Monitor, “There are major disparities regarding climate change studies in Egyptian academic and official institutions, in the absence of data and accurate statistics to rely upon in checking how serious the climate change impact is on Egypt.”

He added, “The official strategies and plans that the state announces are unrealistic and unfeasible.”

He explained, “The strategies focus on the use of salinity-tolerant and drought-tolerant varieties of grains. Yet, there is no accurate information on the expected temperature or soil salinity. Therefore, we cannot be sure that these solutions are efficient and feasible.”

According to a report issued by the UN Development Program in 2009, Egypt is among the countries most affected by climate change risks, as its shores are at risk of sinking, while its water security and food security are under threat.

A study conducted by the Climate Institute in 2009 said that by 2020, Egypt could lose more than 15% of its most fertile agricultural land in the Delta region, due to sea level rise and land salinization.

Climate change is threatening water security the most, especially since nearly 86% of the water Egypt consumes originates from the Nile River, which flows from outside the Egyptian border. Despite the political momentum and popular interest in the Nile water, there is no official move to conduct studies on the potential impact of climate change on the Nile, or studies on drought or flood scenarios and how Egypt would adapt to such scenarios.

The Egyptian Foreign Ministry posted on its website the “Water Scarcity in Egypt” report in February 2014. The report read, “There are fears that climate change will affect the Nile River, since drought previously hit the river from 1979 to 1987.”

The report further states, “The issue of threats to water security is most sensitive for Egypt.”

Sameh Kantoush, an expert in water resources and environmental engineering, told Al-Monitor, “An optimistic scenario on the impact of climate change on the Nile River suggests an increase in the amount of water in the river — assuming that temperatures will be high and water evaporation rates will increase. This would therefore lead to additional rainfall on the Ethiopian and tropical highlands. A negative scenario suggests potential drought, assuming that there is a lack of rainfall.”

Kantoush explained, “The first scenario is circulating the most among ecologists, based on several theoretical comparisons.”

He added, “Resorting to dams is the most sustainable solution to adapt to the impacts of climate change on the Nile River basin, provided that the dam designs go in line with the river’s nature.”

Low self-sufficiency in basic food supplies in Egypt is another risk posed by climate change to Egypt’s food security, as Egypt is already the world's second-largest importer of wheat. Agricultural production has decreased since 1980, in terms of total cultivated area and productivity per acre, according to 2013 figures from the UN Food and Agriculture Organization.

Experts are concerned that while the Egyptian government has issued many official statements indicating its interest in climate change, it has only produced mere plans and minutes of official meetings so far, without taking any serious measures to protect its water and food security from climate change.