The author of a current study says Ethiopia must agree to change the Renaissance Dam's design to prevent serious environmental repercussions for itself, Egypt and Sudan. 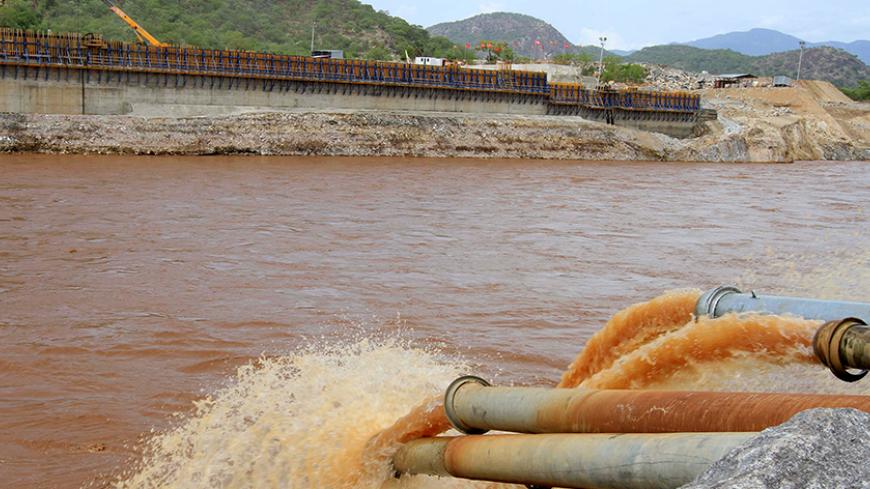 Water gushes out from pipes by the construction of Ethiopia's Great Renaissance Dam in Guba Woreda, Ethiopia, June 28, 2013. - REUTERS/Tiksa Negeri

The study by Sameh Kantoush, a professor at Japan's Kyoto University who specializes in dams and water resources, warns of the potential for a number of bleak scenarios involving environmental deterioration that would affect not only the downstream countries of Egypt and Sudan, but Ethiopia as well. Indeed, repercussions would also reach the Mediterranean Sea.

The dam, as currently designed, would affect the quality of Egypt’s drinking water and potable water stations, as well as the Egyptian-Sudanese water reserves in Lake Nasser.

The study, which is still being finalized, assesses various river dams around the globe. Al-Monitor secured a copy of the study's most important results regarding the Renaissance Dam. If the dam is put into commission as scheduled in July, the damage will start in the upstream country, Ethiopia, and intensify in Egypt and Sudan.

In Ethiopia, silt will accumulate inside the dam's reservoir because of insufficient openings at the bottom. The resulting sedimentation increases the likelihood that the dam will collapse, evaporation rates and greenhouse gas emissions will increase, and the water's biological and chemical specifications and physical properties will deteriorate.

The study divides the damage in Egypt and Sudan into three impact levels. The first level addresses how the dam would prevent silt from being carried to Sudan and reduce the amount of water flowing to Egypt. Then, water quality would decrease and pollution would increase. The second level includes the impact of the deteriorated water quality on invertebrates and fish. The third level addresses the negative effects on mammals and birds.

Speaking to Al-Monitor, Kantoush said that for many years he has been studying the extreme impacts of dams on various rivers in the world. He explained that these dams trap water and silt behind their walls and disturb the natural equilibrium of the rivers. When governments prepare their own designs, they often do not include measures to minimize negative effects on the environments and communities upstream and downstream from the dam.

The only way to avoid these impacts is to create dams that generate power but do not hold back water and sediments, he said.

“Within 10 years, the course of the Nile River toward Egypt and Sudan at the lower part of the Renaissance Dam will be reduced by more than 5 meters [about 16 feet]. The dam will [intensify] the erosion of the river course, threatening to affect [Egypt’s] Mediterranean coast, potentially totally submerging the Delta areas.”

Kantoush explained, “This requires taking swift engineering and environmental measures before construction is completed, to protect the Egyptian coast from erosion.”

Nader Noureddine, a professor of water resources at Cairo University, told Al-Monitor, “The construction of the Aswan High Dam in Egypt led to the deterioration of water quality by reducing fish stocks and causing the extinction of many fish species by trapping the Nile water stored in Lake Nasser. The Renaissance Dam will add to the Mediterranean environmental crises.”

He pointed out that the impacts could lead to faster displacement of 4 million Egyptians living in coastal cities, since the Mediterranean Sea level is currently rising 1 to 2 centimeters (0.4-0.8 inches) per year, while the Delta areas in Egypt are sliding 1 to 3 mm (0.04-0.12 inches) per year and are expected to further recede as the Nile water levels drop.

For his part, Alaa Yassin, adviser to Egypt’s minister of irrigation for dams and the Nile Basin, told Al-Monitor that Egypt consumes its entire Nile water quota of 55.5 billion cubic meters (14.7 trillion gallons) and reuses agricultural drainage water more than once — and still has an annual water deficit of up to 11 billion cubic meters.

Noureddine said, “The Renaissance Dam will trap 136.5 million tons of silt and various weeds that will degrade behind [its wall] every year, which will cause a very high microbial activity and lead to oxygen depletion in the Nile waters.”

He added that Sudan is inclined to compensate for the lack of silt by using agricultural chemical fertilizers, similar to what Egypt did after the High Dam was built, which would only exacerbate the discharge of contaminated agricultural wastewater in the Nile for both countries.

Noureddine indicated that an African expert who collaborated in drafting the May 2013 report of the International Panel of Experts on the Renaissance Dam confirmed that fish will disappear from the Nile River in Sudan and Lake Nasser in Egypt within five years after the dam begins operating.

Kantoush’s study about various dams in the world cites the example of the Mekong River, where China had the same plan as Ethiopia to create a series of dams, which would have harmed Vietnam as a downstream country.

China took the advice of experts and modified the designs of its dams to generate electricity with the same capacity and with minimal damage to Vietnam by reducing the size of those dams' reservoirs.

It seems that things are different for the Nile Basin. Egypt and Ethiopia still disagree on the feasibility of modifying the dam’s design. Ethiopia has rejected Egypt’s request to increase the Renaissance Dam openings so water can pass through four openings instead of just two.

Yassin explained that the additional openings Egypt is requesting relate to that country's water security and its ability to make use of water during droughts or in case the power-generation turbines malfunction.

The Egyptian public seems to feel the Renaissance Dam negotiations are useless. According to an opinion poll conducted by Al-Youm Al-Sabeh in early January, 66% of its readers feel the negotiations are unlikely to lead to positive outcomes.