A study by an Egyptian professor reports that Ethiopia’s new dam puts heritage sites at risk — and not only those in Egypt. 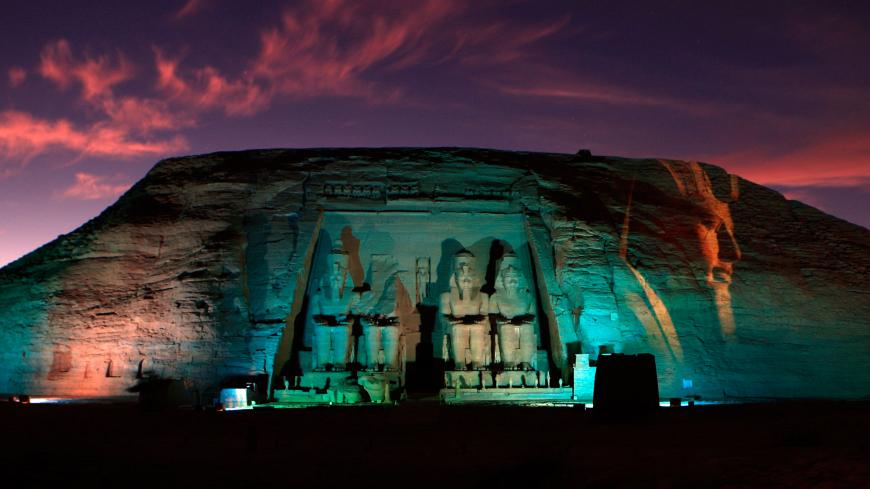 A view of the 3,200-year-old Abu Simbel temple, seen during a daily sound and light show, at the upper reaches of the Nile, Egypt, Feb. 21, 2010. - REUTERS/Amr Abdallah Dalsh

Natural and cultural heritage sites in Egypt and the Nile Basin countries are at risk due to the negative impact on the environment that would be caused by the Grand Ethiopian Renaissance Dam, according to a study by Egyptian archaeologist Abdel Aziz Salem.

Ethiopia started building the dam in 2011, at the height of the Arab Spring. As it nears completion seven years later, it has become a major conflict between Ethiopia and its two downstream neighbors, Egypt and Sudan.

Salem's study, which was finalized in March, reports that the construction of the dam is not simply a political and economic issue but a cultural one, as it would have grave consequences on the UNESCO-registered natural and cultural sites in the Nile Basin.

The report, which is the result of a five-year research project by Salem, states that the sites at risk are located not just in Egypt, but in Ethiopia and Sudan as well. Salem, a professor of archaeology at Cairo University, worked from 2002 to 2015 at the Islamic Educational, Scientific and Cultural Organization. He will present the report at an international conference on sustainable development in Africa scheduled for May 7-9 at Cairo University's Institute of African Research and Studies.

"Some world heritage sites in Egypt will be affected by future climate change due to the construction of the Ethiopian dam, which causes a decrease in the Nile water level, soil erosion and shortage of groundwater," Salem told Al-Monitor.

One of the most famous of these sites is Abu Simbel Temple, located 230 kilometers (143 miles) southwest of Aswan. When the temple was at risk of flooding during the construction of the High Dam in Aswan, UNESCO led an unprecedented international campaign in the 1960s by dismantling the temple, stone by stone, and moving it some 200 feet above the original site.

"The same is expected to happen when the Ethiopian dam is fully constructed. The Ethiopian dam will impact the level of the Nile River in the surrounding area causing the water to rise. This will lead to disturbance of the soil and the environment surrounding Abu Simbel Temple and the temples of Luxor and all the monuments built on the banks of the Nile River," Salem warned.

He said that Thebes would be at risk, too. Thebes was the capital of Egypt during the Middle Kingdom and the New Kingdom, and includes areas on the eastern bank of the Nile, where the temples of Karnak and Luxor are located, and the western bank with its necropolis of large royal cemeteries and funerary complexes.

Salem believes that the findings of his paper should be used "to urge Ethiopia not to finalize this dam or at least not to build other dams in areas that may endanger heritage.”

He noted that since many of these monuments are listed on the UNESCO World Heritage List, they do not only belong to Egypt but to mankind. “It is my right to demand [international measures to protect] these sites that are registered on the UNESCO World Heritage List,” Salem said, calling for an international campaign similar to the one of the 1960s, when the Aswan Dam was under construction.

He added that it is not simply Egypt's heritage that would be negatively impacted, but that of Ethiopia as well. According to Salem, nine heritage sites in Ethiopia would be impacted, including Rock-Hewn Churches, Lalibela, in the heart of Ethiopia, and the Konso Cultural Landscape, a "spectacular example of a living cultural tradition" dating back more than 400 years.

“The dam will reduce the optimum area for the habitats of birds. It will put animals in danger of extinction as well,” he said, adding that the change in flora and fauna would increase the risk of drought and high temperatures.

Some of the affected areas would also include Sudan’s Gebel Barkal, a small mountain located some 400 kilometers (248 miles) north of Khartoum that includes five archaeological sites over an area of more than 60 kilometers (37 miles) in the Nile Valley.

Commenting on the study, Mamdouh Ouda, director of disaster management at the Antiquities Ministry, told Al-Monitor, “I totally agree with what is mentioned in the study — that the Egyptian sites of Abu Simbel and Thebes would be affected by the construction of the Ethiopian Dam.”

He added, “The ministry can't do anything to prevent the negative effects due to its low budget. The government should pay more attention to the antiquities sector as it is the country's heritage."

Gamil Abdel Moety, lecturer of meteorology at Cairo University's Institute of African Studies and Research, also agreed with the findings of the study by Salem. “Due to climate change, the archaeological areas will be affected by high temperatures and humidity as well as sandstorms that will threaten its survival,” he told Al-Monitor.

He noted there should be preventive measures and strategies to mitigate climate change, explaining that the Ministry of Agriculture and Land Reclamation is working on the development of new grains and products that can endure high temperatures, drought and excess soil salinity.

Egypt's Ministry of Water Resources and Irrigation is in the process of constructing concrete walls to reduce the erosion of beaches as well as developing campaigns to raise awareness about rationalizing water consumption and preserving the Nile River. However, according to Abdel Moety, any sustainable or long-term environmental plans would require considerable funding.