Four months after it closed following the death of its owner, downtown Cairo's Café Riche has become home again to the Arab intellectuals, revolutionaries and politicians who have frequented it since its inception in 1908. 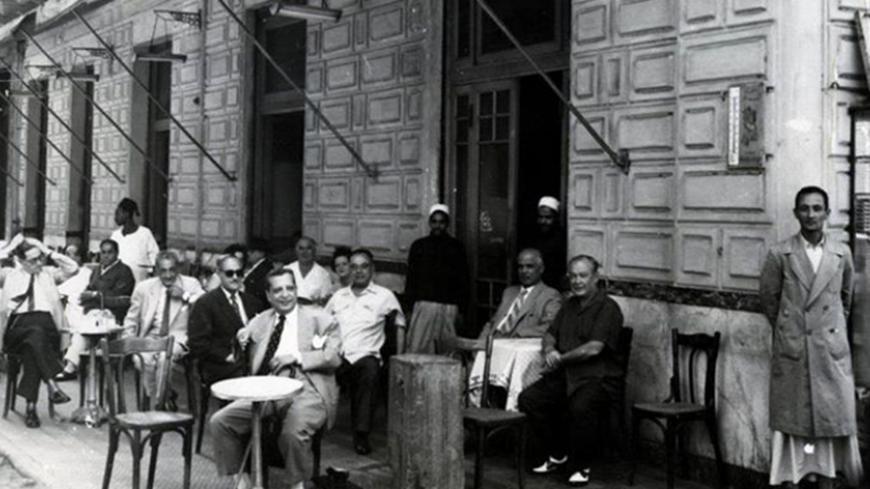 Café Riche has been a center of intellectual life in Cairo since its founding in 1908. The cafe recently reopened its doors after closing following the death of owner Magdi Abdel Malak in May. - Facebook.com/Cafe Riche.eg

CAIRO — Central Cairo's 17 Talaat Harb Street is an address many Egyptian intellectuals know by heart. It is where Café Riche, one of the most famous cafés in Cairo, is located. The café reopened its doors in early October after being closed for four months following the death of its owner, Magdi Abdel Malak, in May. The café has resumed receiving the Arab intellectual, revolutionary and political visitors it has always hosted since its inception in 1908.

The café was established on the ruins of a palace that belonged to Mohammed Ali Tewfik Basha, a cousin of King Farouk, that dated back to 1836. After the palace was destroyed in 1908, the Jewish Ada family built the French-style café, which was later bought by wealthy Austrian Bernard Steinberg, who resided in Egypt at the time, on Oct. 26, 1914. Steinberg then sold it in 1915 to the French Pierre-Henry Ressigné, who named it “Café Riche” after a famous café in Paris. Many wealthy foreigners lived in Egypt during this era, and the British Mandate was imposed on Egypt in 1882, partly to protect these foreign nationals.

The café then rotated among Greek owners for nearly half a century until 1960, when the first Egyptian bought it. Mikhail Abdel Malak, Magdi Abdel Malak's father, renovated and reopened it in the 1990s following a 20-year closure. The café is currently owned by the sons of Magdi’s brother Michel and managed by one of them, Andrew Michel Abdel Malak.

Over the course of its history, the café has served as a meeting place for Arab writers and intellectuals such as Naguib Mahfouz, Youssef Idris, Amal Dankal, Salah Jahin, Tawfiq al-Hakim and Poet of the Nile Hafez Ibrahim. Its clientele also included many Syrian, Iraqi and Yemeni refugees, among them Iraqi poet Abdul Wahab al-Bayati, Syrian Hussein al-Hallak and Sudanese poet Mohammed Fetouri. A stage was attached to the café, offering a venue for great Arab singers like Umm Kulthum.

Samia Abdel Malak, Michel’s wife, told Al-Monitor that her children, the rightful heirs of the café, are not considering selling it. They want to preserve the role the family has served for more than 100 years and maintain the café as a meeting place for Arab intellectuals.

“The café continues to cling to its combative role; it opened its doors during the January 25 Revolution to cater to the Tahrir Square revolutionaries, who would come from the square to use bathrooms and have free drinks,” she said.

Samia asserted that the revolutionaries held secret meetings in the café under the auspices of its late manager to plan for the January 25 Revolution. “The same happened before the June 30 Revolution,” she added. Activists Ahmad Dooma and Alaa Abdel Fattah were among the most prominent revolutionaries who frequented the café.

Samia took Al-Monitor on a tour. After the first hall, which is large and contains wooden tables, another hall holds a bar and the "Riche museum," where several pictures of celebrity visitors hang on the wall. In the back, a sign reading “Riche’s Cultural Salon” marks where the world-famous novelist Naguib Mahfouz held his weekly cultural symposia.

At the entrance to that hall, a wooden staircase leads to a cellar. This staircase was discovered during the renovation of the café following the earthquake that hit Cairo in 1992. While wall cracks were being repaired, Magdi Abdel Malak discovered a secret tunnel to a hall containing an ancient printing press and other historical treasures. This secret basement turned out to be used by rebels in 1919 to print leaflets.

Samia said that the hall had a secret door for rebels to escape the café whenever police carried out inspections. “The place was always full of members of the political police and intelligence services,” she added.

Samia pointed to an old piano at the entrance of the hall and told Al-Monitor the Café Riche orchestra would play here before the 1919 revolution to cover the sound of the rebels printing their leaflets. In 1919, the café witnessed an assassination attempt on Egyptian Prime Minister Yusuf Wahba as his convoy passed its doors.

Al-Monitor met with Aam Felfel near the bar. Still a waiter, Felfel is almost 80 years old and beloved by Café Riche's frequenters. “This place witnessed the writing of history. Rulers have visited this place in their youth to learn politics and meet with intellectuals,” Felfel told Al-Monitor.

As he pointed to one of the café tables, Felfel added, “When he was studying in Cairo, Saddam Hussein sat over there among the refugees. Over there, Gamal Abdel Nasser and Anwar al-Sadat sat.”

Samia commented, “Sadat would always order the chicken pasta bake, which was his favorite, and tell Aam Felfel that he would settle the bill at the end of the month.”

The political history of Café Riche is riddled with excitement. Most recently, the café's door cameras were used by the Egyptian authorities to investigate the killing of Shaima al-Sabbagh, who was shot by the police during a demonstration commemorating the January 25 Revolution in Talaat Harb Square, Samia said.

In 1972, the literary revolution started within the café to protest the assassination of Palestinian novelist Ghassan Kanaani.

For his part, novelist Alaa al-Aswany has said that the café has stood witness to several national altercations. At one time, the café's regulars publicly denounced infamous Egyptian writer Ali Salem for bringing the Israeli ambassador there. Magdi Abdel Malak joined in their objections to his presence.

Café Riche’s vibrant political history led to its closure during the rule of Anwar al-Sadat. Although the late president was himself a patron of the café, he had it closed after he witnessed heated discussion and debates over his rule and the peace treaty with Israel taking place within its walls.