In a seemingly normal evening, Israelis enjoyed a rock show by Bon Jovi, while the situation in Jerusalem and the West Bank keeps escalating, with dramatic stabbing incidents. 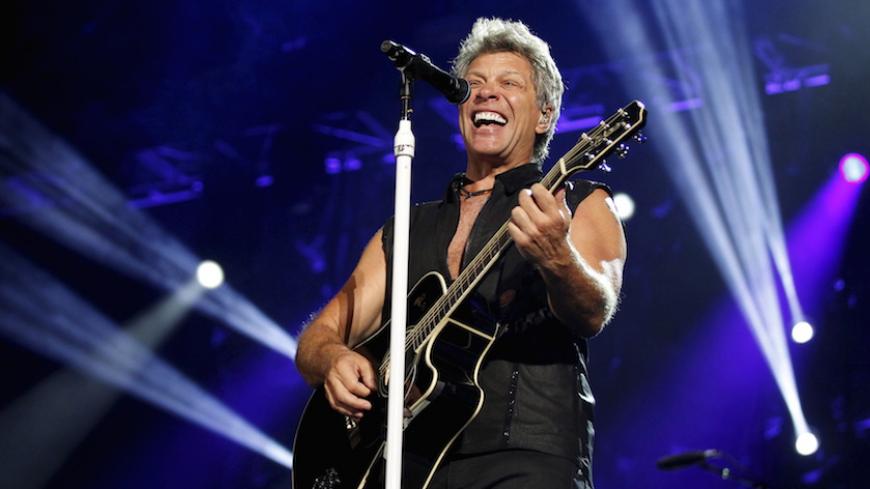 Bon Jovi drew close to 55,000 enthusiastic fans to Tel Aviv’s Hayarkon Park the night of Oct. 3. The preaching by Pink Floyd co-founder and boycott, divestment and sanctions activist Roger Waters, sent Bon Jovi another message the day before his performance declaring that by going to Tel Aviv he was “standing shoulder to shoulder” with “the settler who burned the baby,” but it failed to stop the show. Bon Jovi ignored these entreaties in an elegant way. For over two hours he gave himself to the Tel Aviv crowd and declared that he would come again “whenever you say,” ended the evening by exhorting the fans to “stay safe,” and he knew why.

On the eve of the popular American rocker’s arrival, on Oct. 1, Palestinian terrorists murdered Eitam and Naama Henkin, residents of the West Bank settlement of Nerya, in front of their four children. The children were with them in the car and were miraculously saved. Their oldest son, Matan Hillel, 9, said the Kadish prayer for the dead over his parents’ grave. He is one of four orphans, with the youngest just a few months old.

The roads in Jerusalem and Judea and Samaria, which have turned into a bloody front, are a world apart from Tel Aviv, where Bon Jovi performed at Hayarkon Park. Just a 45-minute drive separates these two universes. An hour before Bon Jovi took the stage, two Israelis were stabbed in the Old City of Jerusalem and succumbed to their wounds. Several hours after he walked off the stage, a 15-year-old Israeli boy was stabbed near the Jerusalem Damascus Gate. Bon Jovi dedicated one of his new songs — “We Don’t Run” — to the wild audience of tens of thousands. He apparently follows current events and understands politics. He can rest assured: Israelis aren’t running anywhere. They simply repress reality. Somehow they manage to maintain the flourishing, liberal, rocking state of Tel Aviv, but also the Judea and Samaria state — wild, Biblical and bleeding.

This is the third intifada. One can stop hesitating and wondering about it; one can stop trying to come up with a definition for the current state of affairs. For now, its confines are limited to youths throwing stones at passing cars, fire bombings, occasional stabbings, and small cells ambushing Israeli cars and spraying them with automatic weapons fire. We have yet to reach the “big leagues” of suicide bombings, but we may get there. What we are experiencing now illustrates the fragility of the status quo and the fact that the conflict cannot be “managed.” Palestinian President Mahmoud Abbas is losing control. So is Prime Minister Benjamin Netanyahu. The coming days and weeks will determine where this intifada is heading.

The prime minister flew back Oct. 4 from his “speech of silence” in New York at the UN General Assembly. He is also facing a domestic intifada from his right flank. In recent days, he has received sharp criticism from the right-wing HaBayit HaYehudi Party. Ministers Naftali Bennett and Ayelet Shaked are both demanding actions and results, a crackdown on rioters and terrorists, the construction of new settlements and the return to jail of Palestinians freed in the 2011 Shalit prisoner exchange deal. Netanyahu is furious, reportedly accusing them of making “cynical political capital” out of these difficult circumstances. In such cases in the past, he used to arrive at the scenes of attacks, to “dance on the blood” of the victims and to criticize the spineless government for not doing enough to quell terrorism. The problem is that this spineless government is now his own. He formed a narrow right-wing government. Now is the time for him to prove that the right has solutions to the problem, to implement the doctrine he has been preaching to the world for decades. But he lacks the tools to do so: the courage, the international credit, the willingness to bear the consequences of whatever measures he takes. The only thing Netanyahu wants is to get home in one piece, to maintain the status quo, to denounce Abbas in public, but to pray in private with all his heart for his well-being. The thing is, this system is bankrupt.

Over the Sabbath, Netanyahu considered sacking Justice Minister Ayelet Shaked — hated by members of his household — following her interview with Channel 2 News in which she criticized government policy. The problem is that firing her is not an option. A HaBayit HaYehudi pullout from the government will lead Netanyahu to elections. Opposition leader Isaac Herzog will not rush to his side to prevent his downfall. Given the present state of things, prospects of expanding the government are slim. Netanyahu is reaching his moment of truth, the moment when all the balls being juggled in the air at the same time start to fall. The stick is too long for him to be able to hold it at both ends. Either he wants a real diplomatic process, with concessions and costs, or he wants a true right wing, with a heavy-handed approach, with continued settlement building and the danger of diplomatic isolation. Israel is losing control and deterrence on the ground, especially in East Jerusalem, and losing the greatest defense asset it has had in the past decade— the asset named Mahmoud Abbas.

The Palestinian leader has not condemned the horrifying attack in which the Henkin couple was killed in front of their children. Previously, Abbas would issue condemnations of such events, even if mealy mouthed. This time, he was silent. When he got back from New York, a ceremony was held in his honor in Ramallah, providing him with an opportunity. But he was mum. Anyone delving into the reason will understand that Abbas fears for his safety. He, too, has lost his legitimacy vis-a-vis the Hamas and Islamic Jihad organizations. He has not been truly delivering for years, and his people have lost hope; condemning murderers has become an almost impossible mission. Palestinian society views the attackers as brave heroes, true “shahids” (martyrs), and Abbas no longer has the ability to stop this wave alone with his bare hands.

Those most worried by the current state of affairs are the heads of the various Israel Defense Forces. The IDF and Shin Bet are appreciative of the coordination with the Palestinian security apparatus. This coordination continues even as these words are being written, but contrary to the past, the IDF is already weighing the possibility that it might end or dissipate at any moment. The West Bank refugee camps declared mutiny a long time ago. Abbas’ forces are pulling back. In his Fatah party there is increasingly strident criticism of his legacy, which rules out the use of violence as a diplomatic tool and prefers the path of negotiations.

The latest attacks were likely carried out by activists of Hamas and Islamic Jihad, but Israel knows full well that the time is near when Fatah, too, will join the fray. As things look now, a decade of relative calm in the territories is fast coming to an end. An “end to the conflict” is no longer feasible, and now the option of “managing the conflict” is also off the table. The sides may have to find new managers.