US sanctions Hamas leaders, but why now?

Hamas suspects the United States is trying — but failing — to undermine the movement's truce efforts by designating three Hamas leaders as terrorists. 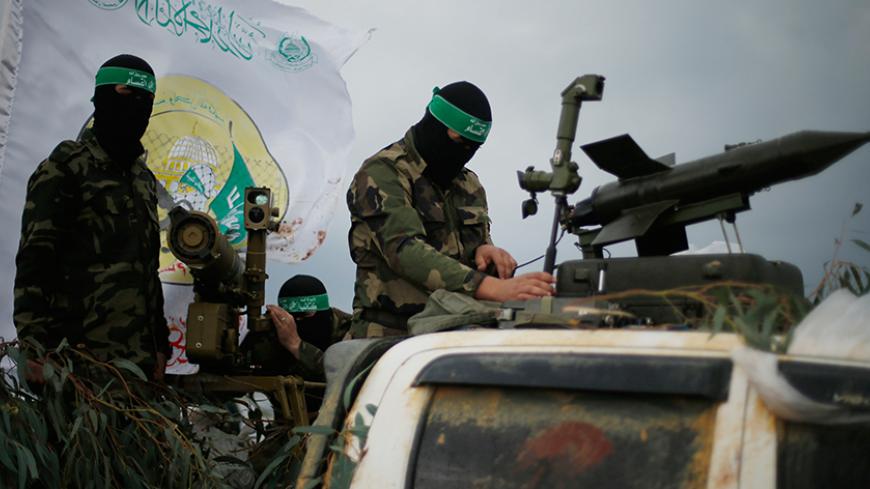 On Sept. 8, the US State Department unexpectedly added three Hamas leaders to its blacklist of Specially Designated Global Terrorists, freezing their US assets and prohibiting its citizens from doing business with them. The move against Mohammed al-Deif, Yahya Sinwar and Rawhi Mushtaha is prompting speculation on what might have motivated the United States to act now.

According to the State Department's website, the three Hamas leaders are known for their roles in founding Hamas’ military wing, Izz ad-Din al-Qassam Brigades, in 1991, and for planning armed attacks against Israel.

This is probably the first time Washington has described Hamas leaders as terrorists, although it classified Hamas itself as a terrorist movement in 2001 and held the former head of Hamas’ political bureau, Mousa Abu Marzouk, in 1995-97.

Deif has been wanted by Israel since 1993. He is very secretive and cautious, and has been the target of Israeli assassination attempts, most recently during the Gaza war of 2014. Between 1993 and 2014, he oversaw operations that resulted in the deaths of dozens of Israelis.

Sinwar formed Hamas’ first military group, the Palestinian Mujahedeen, in 1984, before establishing al-Qassam Brigades. He was arrested by Israel in 1989 and sentenced to 426 years in prison. After he was released in 2011 as part of the Gilad Shalit prisoner exchange, he became a member of Hamas’ political bureau and one of the movement’s most prominent intelligence figures.

Mushtaha, founder of Hamas’ Al-Majd security apparatus in 1985, was arrested by Israel in 1988 on charges of targeting Israeli intelligence agents and was sentenced to 240 years in prison. After serving 24 years, he was released in 2011 as part of the same swap deal and became a member of Hamas’ political bureau in 2012.

The men hold high-ranking Hamas positions and have been involved in the movement’s military actions since its early years. Israel’s targeting of the leaders has greatly increased their influence, especially after Israel bombed their homes during the Gaza war of 2014.

Mushtaha told Al-Monitor, “It is not up to Washington to classify Hamas as a terrorist organization, and the movement does not consider resisting the Israeli occupation to be terrorism, as [the resistance] is an internationally granted right. Washington’s decision will not stop [Hamas] from carrying on with the resistance to free its territories. How long will it take for the US to realize that Hamas is a liberation movement and not a terrorist organization?”

On Sept. 8, Hamas issued a statement in which it described the US decision as immoral, contrary to international law and encouraging Israeli terrorism.

Husam Badran, a Hamas spokesman and former commander of al-Qassam Brigades in the West Bank, spent time in Israeli prisons alongside Sinwar and Mushtaha from 2002 to 2011. Badran told Al-Monitor, “Pressuring Hamas in order to push it to make political concessions is a delusional attempt. The US decision against Hamas leaders is biased to the Israeli occupation, as it targets prominent national leaders who are extremely popular among Palestinians.”

Hamas’ reactions to the US decision were not limited to statements. On Sept. 12, the group supposedly imposed a travel ban on its prominent leaders for fear they would be arrested if they traveled outside Gaza. However, Ziad al-Zaza, a member of Hamas’ political bureau, denied Sept. 13 that the group had taken such action.

According to the same sources, the United States is trying to get the political wing to use its influence to stop the military wing's operations against Israel and prevent it from entering a new war in Gaza. However, Hamas had said many times that the segments are integrated and it is difficult to come between them.

Salah Bardawil, a Hamas spokesman and member of its Legislative Council, told Al-Monitor, “The US decision against the three Hamas leaders might be a green light for Israel to commit crimes in Gaza.”

Not only did the United States classify three Hamas leaders as terrorists, but on Sept. 11, the US Department of the Treasury imposed sanctions on four other Hamas members: Saleh al-Arouri, a member of Hamas’ political bureau; and Maher Jawad, Khayri al-Agha and Mohammad Reda, financial officials in Hamas who fund military operations against Israel in the West Bank and transfer hundreds of thousands of dollars to al-Qassam Brigades to buy weapons.

In this context, Izzat al-Rishq, a member of Hamas’ political bureau, told Al-Monitor, “The US Treasury's decision to impose sanctions on Palestinian figures serves Israeli plans to crack down on charity work in support of the Palestinian people, who are exposed to Israeli terrorism on a daily basis.”

It seems that Hamas was shocked by the US decisions, since they coincided with the movement’s attempts to break down the wall of its political isolation. Since early this year, Hamas has been holding discussions with Western and regional parties to achieve a truce through the former envoy of the Quartet, Tony Blair. These attempts are being made despite the siege imposed by the international community since 2006 after Hamas won the Legislative Council elections.

Hamas seems to believe that the United States, by designating Hamas leaders as terrorists, is demonstrating that it does not support the movement’s efforts to communicate and wants to block Hamas politically and isolate it diplomatically.

At the same time, Hamas does not seem to be heading toward a confrontation with Washington in response to these decisions, since Hamas is concerned with communicating with decision-making circles in the world and wants to confine the armed confrontation with Israel within the Palestinian territories. The movement seems to believe that the US decision might not have a huge impact on its political performance.

Political analysts close to Hamas, including prominent Gaza journalist Mustafa al-Sawaf, claimed that the US decisions might have been an attempt to please Israel, which opposed Washington’s agreement with Tehran over its nuclear program.