Ahmed Ghandour recently became the fifth Hamas leader to be added to the US State Department's terrorist list in a continuation of a long-established US policy being enforced by the Trump administration. 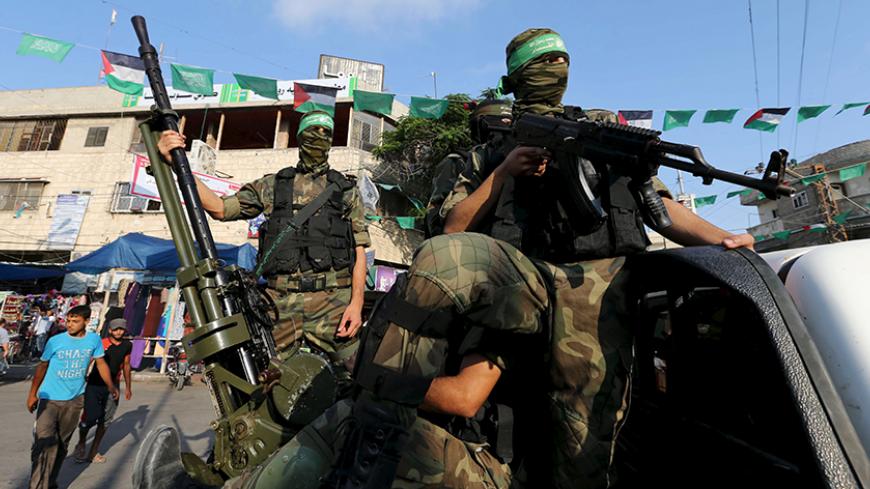 On April 6, the US State Department added Ahmed Ghandour, the commander of Hamas' Izz ad-Din al-Qassam Brigades’ northern branch, to its list of terrorists for his involvement in various armed operations, including taking Israeli soldier Gilad Shalit captive in the Gaza Strip in June 2006. Palestinians know Ghandour as one of the most hard-line commanders in the al-Qassam Brigades and as overseeing the battle against an Israeli incursion into northern Gaza in October 2004 that lasted three weeks and led to 130 Palestinian deaths.

Ghandour, aka Abu Anas, is a member of al-Qassam Brigades’ Supreme Military Council. He is considered the right hand of Hamas' military commander Mohammed al-Deif. He survived Israeli assassination attempts in 2002 and 2012. Israeli aircraft have targeted his home several times, most recently on July 9, 2014, during the war on Gaza. He was detained by Israel between 1988 and 1994 and then held by the Palestinian Authority (PA) from 1995 to 2000. The PA released him after the outbreak of the second intifada in September 2000. Why the United States chose to designate Ghandour a “specially designated global terrorist” at this particular time is unknown, but it comes at a time when Hamas is preparing to issue a new policy document in which the movement is expected to adopt more pragmatic positions.

Hamas issued a statement April 6 calling the US decision unethical, a violation of international law and inciting Israeli terrorism against Palestinians. Amid Hamas spokespersons commenting on the decision, the movement organized a sit-in in solidarity with Ghandour in front of his house in the Jabaliya refugee camp, in the northern Gaza Strip. Supporters raised banners proclaiming that resistance is not terrorism.

Hazem Qassem, the Hamas spokesman in Gaza, told Al-Monitor, “The US decision against Ghandour will not affect the legitimacy of the Palestinian resistance against the Israeli occupation. [The resistance] is legitimate in virtue of international and humanitarian laws and norms. The Israeli enemy and its leadership are the ones that should be placed on the terror blacklist for committing massacres against our people. Such US decisions will not intimidate Hamas and its leaders, nor will they break the will of the Palestinian people. Hamas will continue to resist until Palestine is liberated and the rights of our people are restored.”

Osama Abu Irshaid, a researcher with the Arab Center for Research and Policy Studies who resides in the United States, told Al-Monitor, “The US decision against Ghandour is an extension of the old/new US policy against Hamas, adopted [by President Bill Clinton, then] by former President George W. Bush, followed by Barack Obama and Donald Trump today. … But the fact that the Trump administration is adding specific names from Hamas is a clear display of good intentions toward Israel. This shows a contradiction between US policy and European [policy] toward Hamas, especially since some European parties, such as the European Court of Justice [ECJ], have [recommended] taking Hamas off [the European Union's] terror blacklist since 2003.”

An ECJ advocate general has held that the addition of Hamas to the list was not made according to established EU legal procedures.

So far, a total of five senior Hamas members have been designated terrorists by the United States. In September 2015, the State Department added Deif to its terror list along with Yahya Sinwar, now the head of Hamas’ political bureau in Gaza. Rawhi Mushtaha and Fathi Hamad, members of Hamas' political bureau, joined them in 2016.

The State Department cited Sinwar, Mushtaha and Deif as being founders of the al-Qassam Brigades and for being behind several armed attacks that killed Israelis. Hamad, who served as interior minister in the Hamas government from 2009 to 2014, was accused of using his position to coordinate the work of armed Palestinian cells. Hamad also founded Al-Aqsa television, which is affiliated with Hamas and airs programs to recruit children as fighters and for suicide missions after reaching adulthood.

In another action targeting Hamas, on March 14, the FBI added Ahlam al-Tamimi to its Most Wanted Terrorist list for her role in a suicide bombing by the al-Qassam Brigades in Jerusalem in 2001. Some two decades ago, in 1995, Mousa Abu Marzouk, the first head of Hamas’ political bureau, had a run-in with US officials, who arrested him in New York and held him for 22 months on the suspicion of ordering and transferring funds to Hamas fighters in the Palestinian territories. They ultimately released him in 1997, deporting him to Jordan.

Ahmed Yousef, the political adviser to Ismail Haniyeh, the former deputy head of Hamas’ political bureau and head of the House of Wisdom, spent many years in the United States in the 1980s and the 1990s. He told Al-Monitor, “The US decision against Ghandour is consistent with Israeli demands to label the Gaza Strip as a place of refuge for terrorists wanted by the US judiciary in an attempt by Israel to eliminate any chance of future dialogue between Hamas and Washington. This particularly impedes the Hamas leadership from promoting itself before the international community, especially as it plans to issue its new policy document by the end of April and present a more pragmatic and flexible discourse. In addition, this decision raises a US-European debate on dealing with Hamas in the future.”

Raed Enairat, the head of the Contemporary Center for Studies and Policy Analysis in the West Bank, told Al-Monitor, “The US decision [on Ghandour] has political and security objectives when it comes to people whom Washington believes it will never meet with in the future because of their extremist positions, such as military commanders. This may indeed impede any dialogue between Hamas and Washington, but the difference with Europe is that it [Europe] only classifies Hamas’ military wing as a terrorist organization, not the movement’s political wing. However, the United States does not differentiate between the two and sees both of them as terrorists.”

Hamas is likely disappointed by US decisions to designate its leaders as terrorists because of its potential to negatively impact the movement's foreign relations. It obviously prohibits relations being established between the movement and Washington and also could affect Hamas dealing with countries close to the United States, such as Canada and Japan as well as the US Arab allies Egypt, Jordan and the Gulf Cooperation Council states.