Putin supports Erdogan in Turkey, but not in Syria

Despite his perceived alignment with Russian President Vladimir Putin, Turkish President Recep Tayyip Erdogan came back from his trip to Moscow disappointed. 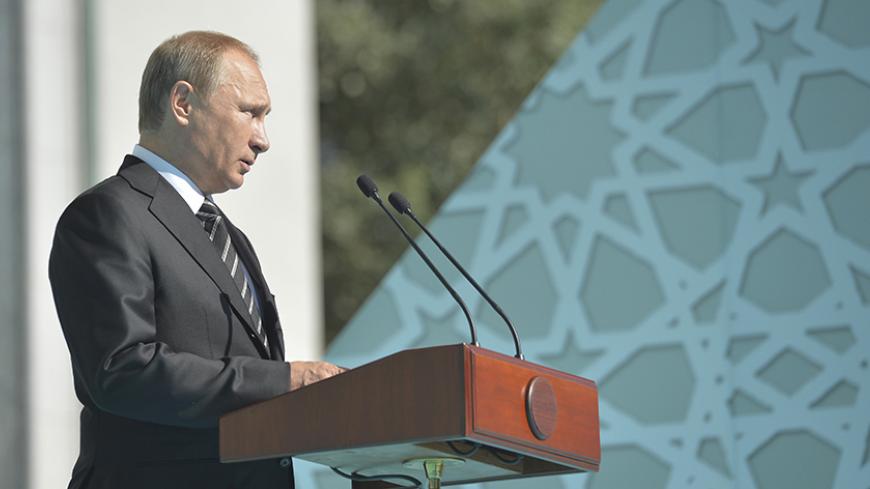 MOSCOW — Turkish President Recep Tayyip Erdogan spoke Sept. 22 during a joint live broadcast by two pro-government news channels, Kanal 7 and Ulke TV. After lambasting the pro-Kurdish Peoples’ Democratic Party and certain Kurdish politicians, he said of his then-upcoming trip to Moscow, “The Syria question will be at the heart of our talks."

He added, “The first topic of my visit that will take place tomorrow is about the inauguration of a magnificent mosque built in Moscow. It is a gigantic mosque that can accommodate around 10,000 people. After that, we will have talks with [Russian President Vladimir] Putin. Naturally, the Syria question will be at the heart of our talks. … The news we receive [from Moscow] is not pleasant. We do have a special relationship with Russia and having such a relationship and then hearing the unpleasant news naturally made us unhappy. I hope to leave Moscow after reaching an agreement with Putin.”

Whenever Erdogan speaks without a written text, it is particularly difficult to interpret his words accurately, yet their meaning is easily understood. His visit to Moscow came on the heels of Russia’s latest military buildup in Syria. To have Putin boosting the chances of Syrian President Bashar al-Assad's survival would further complicate Turkey’s quest to create a safe zone within Syrian territory. The strong Russian military commitment to redress the military balance on the ground would jeopardize Erdogan’s calculations concerning Syria.

It is Erdogan’s paradox that Putin — the person he feels closest to because of their similarities — is putting the most insurmountable obstacles on Erdogan's foreign policy track.

The common characteristics between the two cannot escape any careful observation. Only a few days ago, a Foreign Policy article on Erdogan contained the following lines:

“Erdogan’s ambition is nothing less than to be a modern-day Sultan, a near-absolute executive whose power and authority cannot be challenged or checked. Think an Anatolian version of Russian President Vladimir Putin and you’ll begin to get the idea.”

Such intimacy may explain why Erdogan sounded hurt when he mentioned the “unpleasant news" from Russia, but also why he remained optimistic that he could come to terms with Putin on the Syria issue.

I happened to be attending a meeting in Moscow during Erdogan's visit. On my arrival at Moscow’s Vnukovo airport, I met a diplomat, an old friend in Erdogan’s delegation. My hotel was a stone’s throw from the mosque Erdogan was to help inaugurate.

The lobby was full of Muslim delegations who came to the capital from every corner of the Russian Federation. A huge English-language sign in the hotel lobby, also in Russian and Arabic, read, “The Moscow Cathedral Mosque.” The structure is Moscow’s biggest mosque and one of the three largest in the entire Russian Federation.

After the dedication, the late-afternoon traffic in Moscow was even worse than in Istanbul, with roads blocked off so Erdogan and Putin could make their way to the Kremlin.

It is an interesting feeling to write about Erdogan’s one day in Moscow in my hotel room overlooking the Olympic Stadium and the Moscow Cathedral Mosque. Some snapshots: The Erdogan-Putin face-to-face talk lasted about an hour. Turkey’s president was accompanied by interim Foreign Minister Feridun Sinirlioglu, the former undersecretary of the Foreign Ministry. A one-hour meeting probably comes out to about half an hour of serious talk.

The two leaders, accompanied by their delegations, dined together for about 90 minutes. So, that was about 2½ hours spent on business between Turkey and Russia before darkness fell over Moscow and the Turkish president left Russia’s capital.

Did he get the agreement on Syria that he seemed cautiously optimistic about in Istanbul the day before? He did get Putin's personal political support in terms of Turkey’s domestic politics, but nothing tangible in terms of Turkey’s foreign policy objectives in Syria. In front of the cameras, Putin told Erdogan he is aware that Erdogan is facing parliamentary elections soon and wished him “success for his party.”

Such a statement could well be interpreted as a blunder in Turkey. Constitutionally, Erdogan cannot get involved in the elections. After the president is elected, any formal ties with a political party end. Therefore, in the legal sense, Erdogan is in no position to be wished success for “his party.”

However, in reality he could not care less about such constitutional constraints in Turkey. Putin, knowing this, probably does not care, either.

An important detail concerning the Erdogan-Putin talks at the Kremlin is that no joint statement was issued. In the tradition of Turkish-Russian relations — including during the Soviet period — there have always been joint statements or communiques following top-level meetings. In very rare cases when they were not issued, it signified that the parties respectfully disagreed on the issue at hand.

No one assessing the situation realistically expected an accord on the thorny Syria question. Russia just recently sharply increased the number of combat aircraft delivered to Syria. It deployed a dozen Su-24 Fencer and a dozen Su-25 Frogfoot ground-attack planes; previously, the number parked at Latakia air base in Syria was four.

The deployment of Russia’s most advanced attack planes and multiple defense systems is considered a game-changer in Syria in terms of striking a new military balance to force a new political process. The planes deployed are protected, according to some reports, by possibly three SA-22 surface-to-air anti-aircraft systems and also drones being used to fly reconnaissance missions.

Add to those figures 15 transport and attack helicopters and nine T-90 tanks. Also, Russia has doubled its number of soldiers there, from 200 to over 500.

Putin defined Russia's increased military presence in Syria as necessary for fighting the Islamic State. The United States perceives IS as a top priority; Turkey does not. Therefore, the dramatic Russian military buildup would unquestionably hamper Turkey’s plans to create a “safe zone” (rather than a buffer zone) inside Syria, possibly to be supported and defended by a no-fly zone.

The United States was not won over by Turkish arguments and after the Russian buildup, it would be unthinkable that it could. After all, Washington, while expressing concern over Putin’s moves, adopted a conciliatory approach. Washington's priority in Syria is not the removal of the Assad regime, but “degrading and ultimately destroying” IS.

For Turkey, the priority is Assad's overthrow.

It should not be surprising that Putin could be supportive of Erdogan in Turkey’s domestic political scene. Both have identical views on how to run a country. When it comes to Syria, the two have divergent interests. Given the situations, it would have been surprising for Erdogan to leave Moscow with an agreement on Syria.