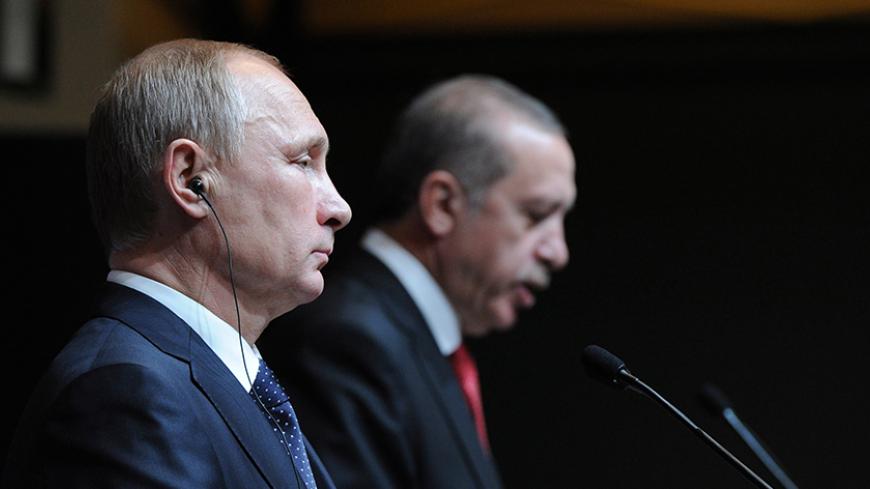 The two countries were already having serious disagreements on the Syrian crisis and the status of President Bashar al-Assad. But Turkey and Russia already had opposing views on Syria, Ukraine and the Crimean Peninsula but had managed to keep their disputes away from their substantive economic relations. When Russia was faced with US and EU embargoes, it opened its markets to Turkish firms, especially in foodstuffs.

Russia, which is hosting the 2018 World Cup soccer tournament, continued building mega-facilities for the tournament and gave priority to Turkish contractors.

It was Putin’s clear support of the Syrian army and the Assad regime and attacks on the Islamic State (IS), but mostly against opposition groups deemed moderate by Turkey, that set off an era of mutual threats in Turkish-Russian and Erdogan-Putin ties. Erdogan bitterly criticized the Russian air attacks and violations of Turkish airspace and declared that he will not call on Putin anymore.

It was Erdogan who put their meticulously preserved relations on the agenda and made first reference to possible sanctions against Russia. He said Turkey can stop its natural gas purchases from Russia that supplies more than 55% of Turkey’s needs and award the building of the $20 billion Akkuyu nuclear power station to another, non-Russian contractor.

Russia did not heed Erdogan’s threats and counterattacked. Its first countermeasure was to stop issuing transit passage documents to Turkish trucks carrying Turkey’s exports to Kyrgyzstan, Kazakhstan, Tajikistan and Mongolia.

Turkish exports to the Middle East and the Gulf had already hit bottom when Turkish trucks lost transit routes because of clashes in Iraq and Syria. Now an annual $2 billion worth of exports to Central Asia is at risk with the Russian sanction.

In an announcement on its official website, the International Transporters Association (UND) reported that transit passage documents through Russia have been annulled and warned transporters and exporters not to send their trucks unless they have valid documents.

Fatih Sener, chairman of the UND executive council, said they couldn’t understand Russia’s attitude. He said massive losses are to be expected as Turkish trucks are held up at border crossings. Sener said they have had occasional problems on transportation issues, but this was the first time when it came to transit passages.

Erdogan’s resorting to economic threats as a reaction to Russian operations in Syria isn’t a realistic approach. For example, the natural gas agreement between Turkey and Russia is a long-term one that requires Turkey to keep paying for gas even if it stops importing gas.

The bilateral agreement on the Akkuyu nuclear power station was signed and approved by the Turkish parliament. If Turkey decides to halt the project or award the contract to another contractor, it first has to convene the parliament to abrogate the agreement.

As Russia is also financing the construction of the power station and work has already begun, heavy compensation would have to be paid with retroactive interest payments.

Russia’s successive restrictive measures in addition to the new one imposed on Turkey’s transit trade has simply declared that it has accepted Turkey’s challenges. Gazprom turned down a Turkish request for an additional 3 billion cubic meters of natural gas for 2016.

Gazprom piled up countermeasures by declaring that it has cut by half the capacity of the proposed $16 billion Turkish Stream natural gas pipeline project and that it may even postpone the implementation of the project by one year.

Russia continued to exert pressure by stiffening its inspections of Turkish foodstuffs and making border crossings more tedious. By rejecting tons of Turkish fruits and vegetables, Russia has been warning that it is capable of inflicting severe damage to Turkey’s exports.

The number of Russian tourists to Turkey has already declined because of the economic crisis in Russia. The process was accelerated after the IS bomb attack at Suruc. The Russian Federal Tourism Agency warned the Russian public that the threat of terror is growing in Turkey and told people to avoid traveling there.

The real question that has made the situation more critical for Turkey is the latest Russian military and political moves. The remark by Putin at the UN General Assembly that it is “only the Syrian army and the Kurds who are fighting IS in Syria” severely disturbed Erdogan and Turkey.

Salih Muslim, the co-chair of Kurdish Democratic Union Party (PYD), the most powerful of the armed groups fighting IS, visited Moscow, and on Oct. 9, he met with Putin’s Middle East envoy and Russia’s Deputy Foreign Minister Mikhail Bogdanov.

After that meeting, a PYD delegation led by PYD Co-chair Asya Abdullah participated in the conference held in Moscow on “The Perspectives of Establishing an International Anti-IS Coalition.”

Increasingly closer relations between Russia and the Kurds brought Turkey and Russia once again into confrontation over their quest to control Kurdish oil and Turkey’s insistence on identifying the PYD as a terror organization because of its links to the Kurdistan Workers Party. Russia’s recognition of the PYD as an ally, which followed the US recognition of the PYD, has further amplified Turkey’s isolation over Syria.

Russia’s response to Erdogan’s economic blackmail with its own economic, military and political countermoves did not stop it from allowing its Sperbank to support the 4.6 billion euro ($5.1 billion) financing of Istanbul’s third airport, which was seen as a signal that Russia did not want their relations to deteriorate any further,

Veteran Turkish journalist Hakan Aksay, who served in Moscow and is currently the president of the Turkish-Russian Research Center, added a new dimension to Russia-Turkey relations and Erdogan’s reaction to Russia’s intervention in Syria.

Aksay reported that Yevgeny Satanovski, the chairman of the Institute of Middle Eastern Studies, labeled Erdogan as the “one who has gained most from the Syrian civil war and one of the main sponsors of the terrorists.” Satanovski claimed that the Russian intervention in Syria has hurt “Erdogan’s wallet.”

As Aksay reported, Satanovski, considered to be one of the leading Middle East experts of Russia, claims that Turkey has been getting a cut of IS’ oil trade, that IS was stealing antiquities from Syria and marketing them via Turkey, and that the Turkish government has been paid significant sums for the human smuggling, wheat and flour trade.