Why have PKK cemeteries become a target?

Kurdish militants in Turkey are accused of using cemeteries as military bases and ammunition depots. 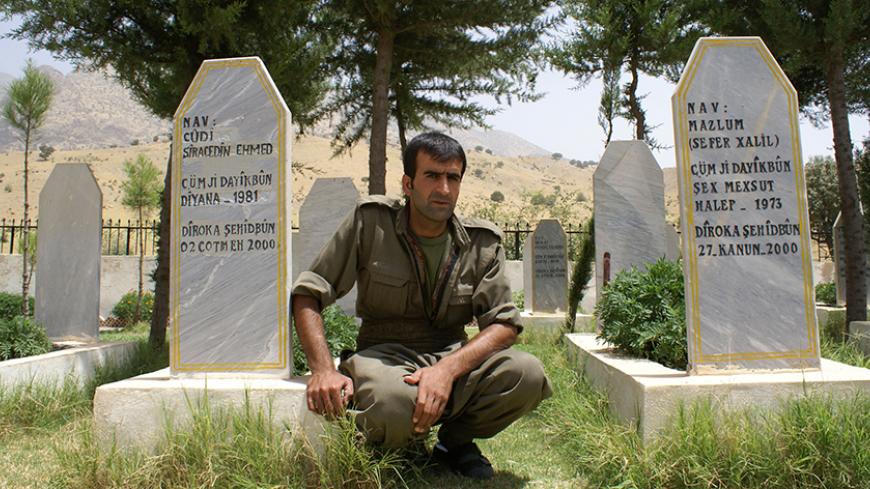 Farhat Amat, a fighter from the Kurdistan Workers Party (PKK), guards a cemetery in the remote Qandil Mountains near the Iraq-Iran border in Sulaimaniyah, July 15, 2007. - REUTERS/Shamal Aqrawi

DIYARBAKIR, Turkey — In the summer of 2013, unusual activity was underway in a rural area not far from Diyarbakir, the central city of Turkey’s mainly Kurdish southeast. Human remains — some of them two decades old and still unidentified — arrived in bags and coffins, exhumed from many locations across the southeast, as long lines of graves were dug. A new cemetery was being shaped, but it was not an ordinary one. The bones of 117 militants of the Kurdistan Workers Party (PKK), killed in clashes with the security forces since the early 1990s, were reburied at what was called the Harun Martyrs’ Cemetery. Named after a fallen PKK commander, the site was adorned with posters of jailed PKK leader Abdullah Ocalan and had the insignia of the outlawed group on its gate. Thousands of Kurds flocked to the cemetery for an inauguration ceremony in October, attended also by PKK militants and Kurdish parliament members.

The cemetery sprung up in the lull of cease-fire and settlement talks between Ankara and the PKK. Media coverage of the event sparked indignation that the PKK was overstepping the mark, and a judicial investigation was launched against leaders of the initiative. Nevertheless, the authorities did not touch the site.

In August 2014, however, a monument dedicated to Mahsum Korkmaz, the first commander of the PKK’s armed units, was erected at another PKK cemetery in the same region, prompting the security forces to take action. The monument was dismantled, but the cemetery remained untouched.

In the meantime, 17 other PKK cemeteries were built across the southeast. Turkish-born Kurdish fighters who died fighting the Islamic State (IS) in Syria and Iraqi Kurdistan were also laid to rest at those cemeteries in crowded funeral ceremonies, often coupled with demonstrations. Again, the authorities stopped short of any serious intervention against the cemeteries and the demonstrations.

Things, however, have changed since late July as the government resumed military operations against the PKK and the militants stepped up their own attacks. The peace process now lies in tatters, with Ankara charging that the PKK had exploited the lull to stockpile weapons and entrench itself in urban areas.

The cemeteries are back in the spotlight amid accusations that the PKK is using the sites as hideouts and bases. The Interior Ministry has reportedly ordered the demolition of the sites, though no official statement has been made on the issue. In mid-September, a military operation in the province of Mus targeted a PKK cemetery in the area. Walls and gravestones inscribed with PKK symbols were demolished. Members of the pro-Kurdish Peoples’ Democratic Party (HDP) claimed the destroyed structures included a mosque and a cemevi, the Alevi house of worship.

The office of the Mus governor, for its part, said the site served as a base for PKK activities and was booby-trapped. The written statement read, “A security operation, backed with air cover, was launched in the Kolan area in the district of Varto after information was obtained that it harbored a group of members of the terrorist organization [PKK], who threatened the life, safety, property and freedom of travel of local residents and had created a so-called martyrs’ cemetery, a site with various structures and annexes where they set up self-styled courts, interrogating and punishing [civilian] citizens. As a result of the operation, criminal acts and materials were discovered in two structures. … The structures, their annexes and surrounding walls were demolished. A large amount of improvised explosives planted around the cemetery were defused. No action was taken against the graves.”

Similarly, a PKK cemetery was among the targets of a security operation in a mountainous area in Agri province. According to the local governor’s office, the security forces shelled and destroyed “sanctuaries and weapon emplacements” of the PKK as well as “structures at a graveyard site, a so-called martyrs’ cemetery, that symbolized the terrorist organization.” The graves themselves were untouched, it said.

In Sirnak province, the authorities declared a “temporary security zone” in the Cudi Mountains in preparation for a move to demolish a similar cemetery. The operation, however, stalled as a group of “human shields,” including women and HDP lawmakers, flocked to the site last week. A “human shield” protest, led by HDP members, was launched also at two cemeteries in Diyarbakir province to prevent their demolition.

“Assaults on cemeteries by a party that leans on Islam and claims to be upholding religious values will no doubt generate strong negative reactions from the public. It’s a move devoid of reason and conscience. Assaults on the dead — our precious ones under the ground, our people’s children, brothers and husbands — are absolutely unacceptable. This is nothing less than savagery,” Bestas told Al-Monitor.

She added, “No one had ever dared to go that far, not even in the 1990s [at the height of the Kurdish conflict] or during military rules. Not even the Turkish army had sought to destroy cemeteries like this."

The main opposition Republican People’s Party (CHP) took the controversy to parliament. In a written parliamentary question on Sept. 3, CHP deputy Niyazi Nefi Kara asked the interior minister whether he had issued instructions for the demolition of PKK cemeteries.

“If the cemeteries are illegal, why did governors turn a blind eye to the PKK when it was building them?” Kara asked, echoing widespread criticism that the AKP had knowingly tolerated PKK encroachments during the cease-fire period to create a false air of reconciliation and score political credits from the electorate.

A government official contacted by Al-Monitor denied that any demolition order was issued, but stressed the security forces targeted “all sites where the propaganda of the terrorist organization is spread and the individuals involved in these activities.” Speaking on condition of anonymity, he said, “Claims of cemeteries being demolished are not true. Propaganda materials such as [PKK] flags and Ocalan pictures are being removed. The graves remain untouched.”

In a public speech this week, President Recep Tayyip Erdogan charged the PKK had stockpiled ammunition in "condolence houses" — locations where Kurds traditionally receive visitors before and after funerals. He was referring to “condolence houses” erected next to PKK cemeteries. “We are now razing these ammunition depots to the ground,” Erdogan said, charging the PKK used the sites to bully and extort civilians. “We cannot tolerate this. We cannot turn a blind eye,” he said.