Syrians are using social media to share their experiences, including at regime-controlled checkpoints, in this case with the goal of reaching decision-makers and improving the treatment of those stopped at them. 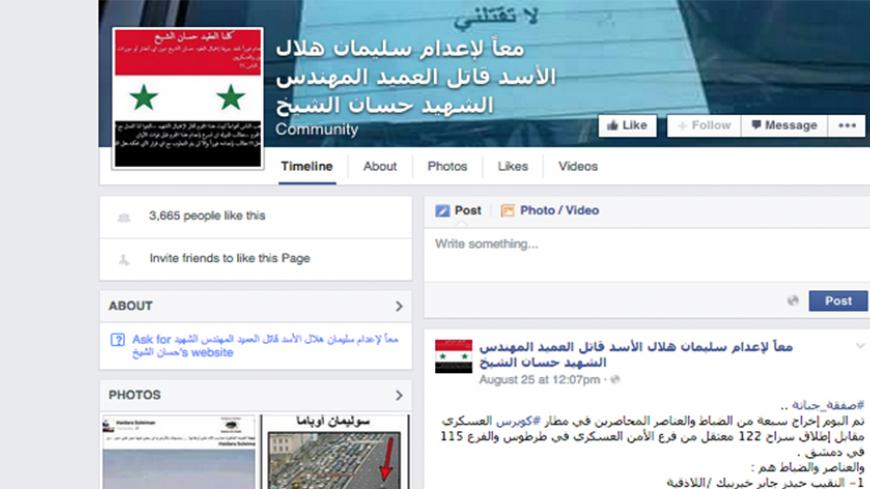 DAMASCUS, Syria — Syrians are taking to Facebook in droves to express their views in light of the complete absence of free media outlets in Syria. Some pages created in mid-August already have thousands of participants. Some pages are social, such as Generations of the 1980s and 1990s, created Aug. 19 as a reminder of Syria during those times and how Syrians went about their lives without certain technologies. The number of participants had reached 70,000 by Sept. 1. Two pages call on Facebook users to express their opinions by stating what they would do if they were president or when the war is over. Some ask people to share their reasons for participating in the revolution. Other pages are satirical, such as the one for sharing experiences at government-controlled security checkpoints. Marra al-Hajiz ... (Once, at the checkpoint ...), created Aug. 25, already has some 13,000 participants.

“All citizens have been crossing internal security checkpoints for the past five years. Let us hear their experiences,” said Tahsin al-Homsi, who launched Marra al-Hajiz, giving Syrian Facebook users an opportunity to express their frustrations with the practices they face when stopped. “Our goal was initially to share our own experiences in a cynical way to put a smile on people’s faces, but in only a few days, an unexpected number of participants joined.”

Homsi added, “The event is not purely revolutionary, but tackles the daily social life and everyday situations experienced by every Syrian citizen in Damascus, so we encourage everyone to participate in it.” He acknowledged that some verbal altercations have occurred between regime loyalists and opponents on the page. He said that some loyalist “thugs” had sent him threats on his personal account, which forced him to block them, but at the same time, he pointed out, some loyalists are sympathetic, because they have suffered the same situations as everyone else at the checkpoints since the start of the revolution four years ago.

The topic is a sensitive one, as corruption and numerous arrests have made the checkpoints infamous. Some 3,000 stories had been shared on Marra al-Hajiz, according to an analysis by Al-Monitor.

Fadi el-Halabi posted his experience Aug. 28: “I was coming back from work when the checkpoint officers stopped me and asked for my identity. As I tried to take out my identity card, the security member noticed that I had cash in my wallet, because I had just received my salary. Suddenly, he started accusing me of having a forged identity card. He ordered me to get out of the cab, to put my hands up and face the wall like a criminal. Five minutes passed, but it felt like a year to me. The security member then said, ‘Fadi, come take your identity card and leave, but you will not need your wallet [anymore].’”

Young men ages 18 to 25 are targeted the most at the checkpoints because military service is mandatory for them. That is why, when moving around in Damascus, young men always carry their documents confirming that they have fulfilled their military service, postponed it for academic exams or have been exempted for health reasons.

Mousa al-Kafari shared his experience on Marra al-Hajiz on Aug. 27: “At one of the entrances to the city of Damascus, a security member asked me to get out [of the car]. He told me that my military service deferment card is fake. Another security member said, ‘Throw him on the side of the road.’ So far, I was not afraid. [He said,] while insulting me, ‘Look at the ground and stand beside the road.’ I did, and then I heard footsteps coming from behind, followed by a loud sound, and then I could not see anything. I thought they had shot me. … Later he gave me back my deferment card and ordered me not to come back again.”

While many of the participants criticize the ill treatment at the checkpoints, some believe the security forces are simply doing their job in protecting citizens and are following orders, especially at military checkpoints.

Nano Syr posted the following on Aug. 27: “My heart breaks every time I pass by the military checkpoints and see the security members. Most of them have not seen their parents, children or families for more than a year. … They stand at checkpoints, defying cold and hot weather to ensure our safety.” She concluded, “May God protect them and protect this country, and may they return to see their children and families.”

Walid Amsha, a professor at the faculty of information at the University of Damascus, spoke to Al-Monitor about the significance of these types of Facebook pages and their impact on decision-makers. “Interactive social networks represent a tremendous space for freedom to express concerns and problems compared to other traditional media outlets. Social media is a platform for social venting in some third-world countries without having any effective influence on the course of events.”

Amsha also stated, “These networks and so-called alternative media have cumulative cognitive, emotional and behavioral effects that raise the level of public awareness about various current events. Decision-makers are thus faced with difficulties, as [access to] knowledge is no longer restricted to them. The various social strata now have reasonable knowledge of data and information, and even of facts.”

In early August, someone on Facebook created the page Together for the Execution of Suleiman Hilal al-Assad, the Killer of Martyr Col. Hassan al-Sheikh. The page calls for the execution of Assad, a cousin of President Bashar al-Assad, after he allegedly assaulted Sheikh, an army officer, and shot him to death Aug. 6 in Latakia. Many think the page and related Twitter hashtag prevented authorities from covering up the crime and led to Assad's arrest Aug. 10 on a charge of murder.

The hosts of Marra al-Hajiz hope citizens’ grievances about the checkpoints will reach decision-makers and other involved parties and change the way the security officers at them deal with citizens. The checkpoints have become part of the lives of all Syrians living in government-controlled areas.