Have Israeli politicians forgotten who they are supposed to serve?

The Knesset opposition seems to have forgotten that it has a crucial role to play in keeping the government in check. 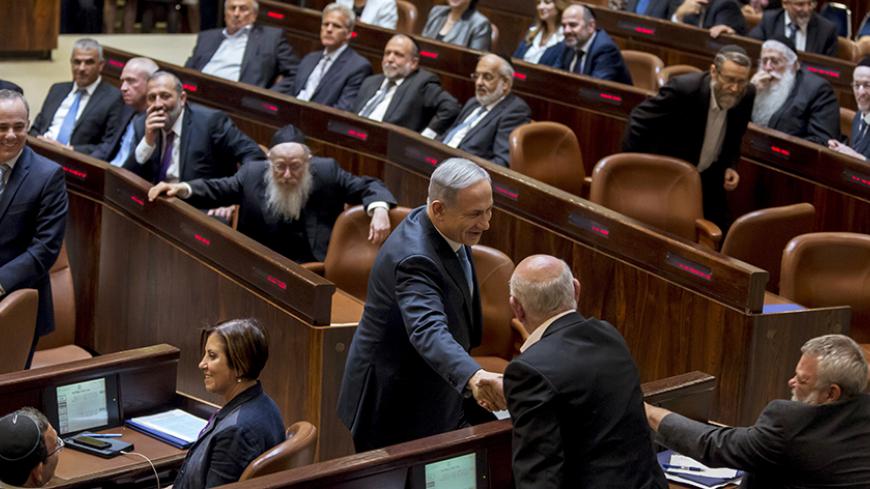 Israeli Prime Minister Benjamin Netanyahu (C) shakes hands with members of the opposition after he was sworn in as prime minister for the fourth time to lead the 34th Israeli government at the Knesset, in Jerusalem, May 14, 2015. - REUETRS/Jim Hollander

When Israel’s 34th government was sworn in on May 14, pundits predicted that it would not last long. They said that the 59 members of the opposition in the 20th Knesset would make the lives of the 61 coalition members miserable. They expected Isaac Herzog, leader of the Zionist Camp, and Yair Lapid, head of Yesh Atid, to either find their way quickly into the new government or to drag Prime Minister Benjamin Netanyahu over sizzling hot coals, all the way to early elections. On paper, the predictions appeared valid. The desiccated majority that Netanyahu relies on, and that so many ministers are, effectively, confined to their ministries — away from the Knesset — provides some added advantage to the opposition. In theory at least, the narrower the coalition, the greater space the opposition has to operate. The chances of opposition members obtaining a majority for their proposed legislation is inversely proportionate to the number of Knesset members supporting the government. Herzog, head of the opposition and thus representing 59 Knesset members — or 53 if one omits Yisrael Beitenu, which often sides with Netanyahu — gets generous radio and television airtime.

Yet, despite the grim predictions that accompanied the formation of Netanyahu’s fourth government, it appears that talk of its impending demise was somewhat premature. Netanyahu seems more worried about the lack of confidence in him among the Democratic minority in the US Congress, stemming from Iranian nuclear deal antics, than a no-confidence motion in the Knesset. Even now, with President Barack Obama having won assurance that the agreement with Iran — the “bad agreement,” as Netanyahu calls it — will survive congressional review, there are no signs of internal pressure on Netanyahu in Israel. He may have failed in his life’s mission of saving Israel from a “second Holocaust,” but he still has no plans to retire to his villa in Caesarea. If Netanyahu's resounding failure to block the nuclear agreement didn’t send shock waves through his government, what could possibly put its existence at risk?

The unanticipated discovery of a gas field off the Egyptian coast, potentially the largest field in the Mediterranean, should have led Netanyahu to rethink Israel's natural gas resource distribution plan. The new discovery, however, didn't stop him from running to the Knesset to get the plan outline approved, although it benefits Yitzhak Tshuva, whose company is drilling in the Tamar gas field, and the US-based gas operation Noble Energy much more than it benefits the Israeli public. If this didn't stop Netanyahu, what possible failure could shake his position as premier and send him home?

As time passes, there is a growing sense from the opposition that the dogs are just barking, or maybe even asleep, as the caravan passes by. This became rather obvious the first week in September during the Knesset’s second and third vote on amendments to the Public Broadcasting Law to allow the creation of a new broadcasting corporation. Yahadut HaTorah member Yisrael Eichler and Minister of Science, Technology and Space Ofir Akunis took advantage of the absence of most opposition Knesset members to insert a clause in the legislation that would ban journalists with the public broadcasting network from expressing their opinions on radio and television.

Nahman Shai was one of only a dozen members of the Zionist Camp who participated in the vote, out of 24 party members total. He described the inserted clause as a “real earthquake, sending tremors through Israel’s public service sector,” and accused the government of turning the public service sector into a “cute little kitten, being kept by the government.” Yesh Atid member Karin Elharrar called the prime minister an “octopus stretching its tentacles into the media” and declared, “We deserve a public broadcasting authority that is untainted.” Nevertheless, 25 members of the coalition passed the law, with only 18 parliamentarians opposing it, including all five members of the left-wing Meretz and Dov Khenin of the Joint List. The entire Yesh Atid faction was absent during the vote, while 12 of the 13 Arab members of the Joint List were busy with other things. Ironically, it could be up to the prime minister to do what the opposition failed to do. Netanyahu has promised to remove this legal stain from the law books.

The more fixed the game that is the Knesset becomes, the more it resembles a reality show. The happy winners, who survive the party primaries and the requisite visit to Jerusalem's Mahaneh Yehudah market, put on their best clothes and invite their families to the Knesset swearing-in ceremony. Although now in the much-coveted “Big House,” it does not mean they’ve reached the finish line. In other words, some will not get appointed minister of something or other, or even deputy minister, for that matter. They won't even be offered a position as committee head. With no fancy title to flash, they soon discover that the press has no interest in them.

Yisrael Beitenu's Sharon Gal, who quit the Knesset this month, seems to have come to realize that an elected official’s success can't be measured by the number of incendiary remarks he makes toward Arabs or the left. Rather, it is measured by the number and quality of legislative initiatives that a Knesset member manages to pass. On Sept. 2, Gal wrote on his Facebook page, “Okay dears, right now I think I can contribute more through the media. I’ll soon start airing a show about economics on Channel 20.” It took him less than half a year to conclude, “I can’t implement what I believe needs to be done in the Knesset.”

That same day, former Education Minister Shai Piron of Yesh Atid announced that he was also frustrated just sitting in the Knesset. “I went into politics to be the education minister of the State of Israel,” Piron wrote on his Facebook page. “I am aware of the importance of a parliament, but personally, I need students, a blackboard, and chalk. I am sorry for waxing poetic, but my life is tied to the souls of children, the eyes of school and kindergarten teachers, male and female, and to dialogue with principals.” Piron emphasized, “The Knesset is an important place, a very important place in fact,” but then explained, “My home is in the educational system, and I have decided to go home.” What would have happened if Yesh Atid had joined the government and Piron had been asked to return to the Ministry of Education? Would he still have preferred his students, his blackboard and his chalk and decided to go home?

In Al-Monitor on Sept. 8, Mazal Mualem noted the difference between the generation of the late Prime Ministers Yitzhak Rabin and Ariel Sharon — who saw no disgrace in spending an extended time in the opposition — and the way both Piron and Gal fled in the face of run-of-the-mill parliamentary work that failed to ensure them a steady tan from the media spotlights. In the past, to say “We shall serve the people from the opposition” didn’t sound like it was lifted from some satirical, political television program. Today, however, fewer and fewer politicians remember that they are in government to serve the public, not for the public to serve them.