When going gets tough, Israel's professional ministers get out

Much like other ministers with no background in politics, Environmental Protection Minister Avi Gabbay preferred to cut his losses and resign rather than fight when faced with a political battle. 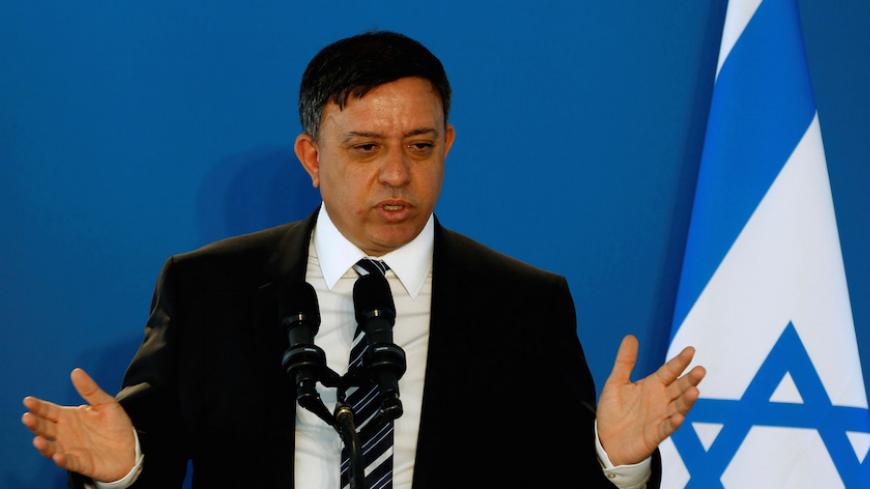 The resignation of Environmental Protection Minister Avi Gabbay May 27 was presented to the public by most of the media outlets as a heroic measure. Not surprisingly, the opposition also attacked the Kulanu minister's resignation speech, in which he explained that he simply couldn’t bear the dismissal of Defense Minister Moshe Ya’alon.

The drama died down quickly, and Gabbay’s warning of imminent catastrophe went unheeded. But Gabbay, who was not especially prominent as the minister of environmental protection and did not succeed in averting or influencing the gas outline, which he opposed, succeeded in resigning as a hero and was not confronted with tough questions.

First and foremost, why did such a principled person who went into politics to make changes and was partner to the establishment of the social justice party abandon the public that bestowed 10 mandates on Kulanu? Why didn’t he try to challenge and change things from the inside? It would have been preferable for Gabbay to have become a champion within the government, a preacher at the gate in real time against extremist policies. His criticism would have been much more effective than a bombastic speech before a hasty and slapdash resignation that is still not clear to observers.

It is hard to escape the feeling that Gabbay forfeited his place around the government table too easily. Gabbay, who was parachuted into politics by Kulanu head and Finance Minister Moshe Kahlon, simply jumped ship. Thus, Gabbay violated his unwritten contract with the public. Gabbay’s resignation proves that in the Israeli parliamentary regime, a professional minister coming from outside the political world is not always the right choice.

Gabbay was a close confidante of Kahlon. The two first met when Kahlon served as communications minister and Gabbay served as the talented CEO of Bezeq. This position made Gabbay a very wealthy man, enriching him with more than 40 million shekels ($10 million). Kahlon valued and respected the young man who grew up in a large Sephardi Jerusalemite family with many children and climbed the business ladder to the top.

As head of the Kulanu headquarters in the 2015 election campaign, Gabbay was well aware of the close relationship shared by Kahlon and Yisrael Beitenu head Avigdor Liberman. Their two parties, Kulanu and Yisrael Beitenu, signed a vote-sharing agreement. Kahlon viewed Liberman as a legitimate, desired partner in the government. Although Gabbay was not given a place on the Kulanu list for the Knesset, he ran the Kulanu election campaign and afterward was appointed as an external minister. This appointment gave Gabbay the air of a man who came to work and not to deal with trivialities.

However, anyone who is familiar with the work of government ministries knows that political expertise is indispensable because power and political independence enable the minister to obtain budget allocations, lead changes and influence the prime minister — in other words, to be an effective player on the field. A minister can bridge the professional gap. Kahlon is an excellent example: As communications minister, Kahlon led the cellphone revolution without any professional background in the field. He succeeded due to intelligence and political power.

Gabbay is not the first professional minister to let us down. Take Shai Piron. He was No. 2 in Yesh Atid when he deserted the battlefield too. Personal chemistry made Piron a close confidante of Yesh Atid Chair Yair Lapid, who then enabled Piron, an educator and pedagogue, to realize his dream by giving him the education portfolio after the 2013 elections. What former Likud Minister Gideon Saar wrested from many long years of political and parliamentary work, Piron received on a silver platter.

After Yesh Atid’s failure in the last elections, the restless Piron couldn’t find his place in the opposition. He got bored and jumped ship. Like Gabbay, Piron also gave up his place in the Knesset and went on his merry way. But in doing so, Piron also violated the unwritten contract between him and the Yesh Atid constituents who expected him to lead for many years.

Gabbay and Piron certainly disappointed those who had appointed them. Kahlon and Lapid had viewed them as partners for the long haul, partners who came to change things but abandoned the cause when it was no longer convenient. Gabbay and Piron might belong to the Israeli political trend that arose following the 2011 social justice protests, but unlike this new generation of young Israeli politicians (such as HaBayit HaYehudi leader Naftali Bennett, Lapid and Zionist Camp Knesset member Stav Shaffir), Gabbay and Piron weren't politicians struggling for their place. Rather, they were stars flown in to their new jobs only to later on abandon their commitments.

The idea of the professional minister arises in every discussion about changing Israel’s ruling system. The term is always portrayed in a positive light. In 2006, Knesset members Avishay Bravermen (Labor), Gilad Erdan (Likud) and others even tried (unsuccessfully) to promote a bill requiring the prime minister to appoint at least four professional ministers. At the time, they explained that in the United States, the people appointed to important ministries are those with experience in the field. Of course, the comparison is problematic because Israel does not have a presidential regime. In Israel, ministerial appointments are a tool in the hands of the prime minister for political stability.

But experience shows that professional ministers are not necessarily the key to success in managing a governmental ministry. It seems that a talented and experienced politician with the ability to navigate political systems will be much more effective. Take, for example, the overcharged health minister, Yahadut HaTorah's Yaakov Litzman — an ultra-Orthodox Jew who leads important changes in his ministry. Or Minister of Public Security Gilad Erdan, a talented young fellow who understands politics and came to work, not play. Or Yisrael Katz, the bulldozer-like transportation minister who started out as an activist in a Likud cell.

All of them had to sweat all the way to the top and so appreciated the positions they reached. True, politicians also have a survival-instinct tendency to hold on to their seats, but that’s why we have elections.