In Israel, battle for Labor leadership gets dirty

As the Israeli Labor Party prepares to chose its next leader, centrist leader Yair Lapid has already positioned himself as the front-runner against Prime Minister Benjamin Netanyahu in the next elections. 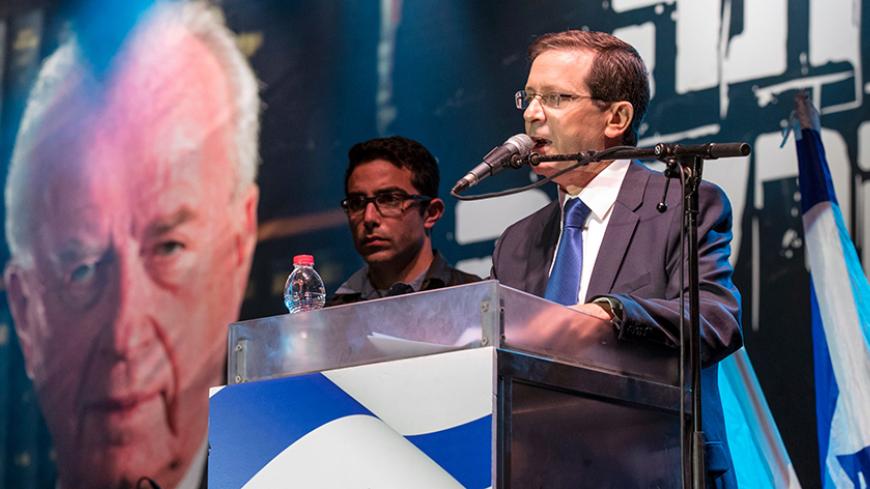 Israeli co-leader of the Zionist Camp Isaac Herzog gives a speech during a rally to mark the 21th anniversary of the assassination of former Israeli Prime Minister Yitzhak Rabin at Tel Aviv Plaza, where he was shot, Tel Aviv, Nov. 5, 2016. - JACK GUEZ/AFP/Getty Images

The Israeli Labor Party has the reputation of eating its own. Nevertheless, last week will go down in the party's annals as one of the strangest in its history. It is not just because of the unusually high number of candidates (nine) for the party's leadership, who can't seem to stop squabbling among themselves. It is mainly because of the pitiable quality of their disputes.

The first round in these primaries are scheduled to take place July 4. It is almost certain to be followed by a second round. Given the number of candidates alone, it seems unlikely that any one of them can pass the threshold needed to win (40% of all votes cast) in the first round.

While the newly elected chairman will lead Labor in the next election, the chances of Labor becoming an alternative to the Likud government are slim. Ever since the last election in 2015, the party has lost almost half of its strength, most of it to Yair Lapid's Yesh Atid. It — or rather the Zionist Camp, in which Labor is the major partner — is now expected to win about 12 seats.

Until just a few months ago, traditional Labor voters still hoped that one of two former chiefs of staff — Gabi Ashkenazi or Benny Gantz — would join the party and lead it back to power. But neither of them found the party attractive enough, leaving Labor with an internal campaign that does not bode well for it.

Cautious assessments say that the first person to make it to the second round will be Peretz, who has made an impressive comeback. Competing for second place are Herzog, Margalit and Gabbay.

The campaign is receiving considerable attention, but only because of the highly publicized, heated infighting, cooked up by creative media advisers. Here are some examples. Margalit and Gabbay accused Peretz of registering party members improperly and have submitted appeals to the party's institutions to disqualify certain voters. Margalit accused Peretz and his team of thuggish behavior, extortion and threats against voters party members and called on him to withdraw, not only from this race but from public life in general. In response, Peretz called Margalit a millionaire who invested his money in the race only to find that people don't like him and lost his mind over it. Meanwhile, there were claims that the party's computers had been hacked.

Most of the attention is focused on the squabble between Margalit and Gabbay, two relatively young candidates who were supposed to bring a new vibrancy to the party. Gabbay joined Labor just a few months ago, but had received some support from the press, mainly because of his attacks on the Netanyahu government, which he quit. Margalit has since targeted him for political elimination. In a debate between the candidates on June 4, held at the Walla news studio, Margalit succeeded in humiliating Gabbay when he forced him to address his voting record. Gabbay contended that he never voted for the Likud in the past, even though he admitted to doing so in earlier interviews.

To top it all off, even ethnicity politics came into play, when Margalit hinted that Gabbay does not speak English well. It could have gone unnoticed if Gabbay, the son of Moroccan immigrants, hadn't used the opportunity to accuse Margalit of racism. It was likely an attempt to divert attention from his own conflicting accounts of his voting record, but Gabbay's decision to invoke ethnicity involved an extraordinary, arrogant, thoughtless and offensive attack on one of the most talented and outstanding politicians in Israel's history, former Foreign Minister David Levy.

Gabbay said in a June 5 interview with Army Radio, "They are trying to do to me what they did to David Levy, as if 40 years haven’t gone by since then. Well, I'm not David Levy. I was an officer. I have a bachelor's degree and a master's degree. I was general manager of an international corporation for 4½ years. I did business around the world. What does he think, that I don't know English?"

It was a week that Gabbay, Labor's "Mizrahi hope," would probably rather forget. He suddenly lost his momentum and went from being a fresh new candidate to an unsophisticated and extremely vulnerable politician.

But it is not at all certain that Margalit benefited from it. The underdog, Herzog, may still be held responsible for the party's current state, but he could yet gain from this childish squabble. In the party's current state, it is quite possible that the current chairman and its former chairman Peretz will compete head-to-head over the party's leadership, even though in many ways both of their political brands are long worn out.

It is reasonable to assume that whoever is elected chair will be able to improve the state of the party, and maybe even win back a few of the seats now held by Lapid, but that's all. Even talk that after these primaries attempts will be made to hold a second round of primaries over who will lead the center-left bloc is meaningless, since centrist Lapid will never agree to it. Whoever is elected will have to lead the party after Lapid has already established in the public's eyes that he will run against Netanyahu for prime minister in the next election. To make any headway, the new Labor leader will have to come up with a more modern and relevant identity for the party.

Netanyahu is following these primaries not because he is worried that a rival to his leadership will emerge, but because he wants to put the option of forming a national unity government with the Zionist Camp/Labor back on the table. With the possibility of a renewal of diplomatic negotiations as pushed by US President Donald Trump, Netanyahu would like to have the option of an alternative government to wave before Naftali Bennett's right-wing HaBayit HaYehudi. Netanyahu believes that if Herzog is re-elected, that option will be revived.