The decline of the big political parties and the rise of personality driven parties are harming Israeli politics by devaluing being in the opposition, where accomplishing change for the public good requires determination. 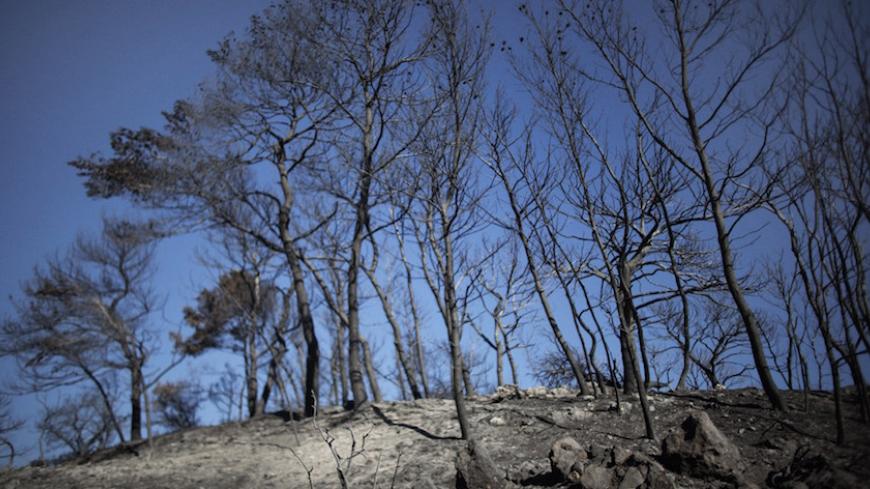 The desolated landscape after a raging fire ravaged the Carmel forest close to Kibbutz Beit Oren, near the northern Israeli city of Haifa, on Dec. 3, 2010. - MARCO LONGARI/AFP/Getty Images

Much has been written about the many years that the late Prime Minister Ariel Sharon spent in the political wilderness after his dismissal as defense minister in 1983 and later during the Oslo process, when he served as a Knesset opposition member. Appearing to be a political has-been, Sharon would sit in the Knesset cafeteria, often alone, yearning for a colleague or a journalist to join him. Sometimes the sight of him there aroused pity.

Even the late Prime Minister Yitzhak Rabin spent seven years as a member of the opposition, between 1977 and 1984. In 1977, he had been forced to step down as prime minister and leader of the Alignment Party (today's Zionist Camp) due to his wife, Leah, having an illegal foreign currency account. At the time, Israeli citizens were not allowed to hold accounts overseas after having serving abroad. The military chief of staff, during the Six-Day War, had to make do with being a regular member of the Knesset Foreign Affairs and Defense Committee. Having penned an autobiography, Rabin, like Sharon, persevered in politics even when it seemed that his political career had run its course. Rabin and Sharon must have sat through countless tedious Knesset deliberations, given speeches no one listened to and fought tooth and nail in Sisyphean battles to win leadership roles.

With former Education Minister Shai Piron, from Yesh Atid, and Yisrael Beitenu member Sharon Gal having announced their resignations from the Knesset the first week in September, we would do well at this time to recall Sharon and Rabin, two personalities who ascended to the premiership after their political careers took a dive. The gap between the generation of giants like Sharon and Rabin, who never thought that serving in the opposition was beneath them, should give rise to a much more profound discussion than what the Israeli media engaged in after the Piron and Gal resignations.

Why do people who have recently been elected to the Knesset — Piron just two and a half years ago and Gal only six months ago — feel that the opposition is too small for them, for someone of their stature? Why does the parliament bore them and give them the sense that they have no power to influence Israeli reality from within the political structure? In this case, does it involve either of them having had to fight hard during the primaries to get the job, having simply been assigned to the Knesset slate by the leaders of their respective parties? Although comparing Gal to Piron would be an injustice to the former education minister, as Gal did very little during his short term, there is nonetheless a common thread in the sentiments they both described that prompted them to walk away from politics.

A rabbi and a highly regarded educator, Piron was brought in by Yesh Atid leader Yair Lapid as a superstar to fill the party's respectable second spot. In light of the party’s success in the 2013 elections, he was appointed education minister. In the wake of the party’s defeat in the March 2015 elections, rumors circulated that Piron was bored and was contemplating resigning. Despite repeated denials, he eventually tendered his letter of resignation from the Knesset. Although Piron was a very active minister and full of good intentions, it appears that two and a half years in the Knesset, including his 21 months as education minister, were enough to exhaust him as a politician.

In an interview with Sima Kadmon from the daily Yedioth Ahronoth, Piron candidly talked about the process leading to his resignation and about one pivotal moment, after which his mind was made up. The moment arrived after the fatal, July 30 stabbing of the teenager Shira Banki during Jerusalem's Gay Pride Parade and the July 31 molotov cocktail attack in the village of Douma in the West Bank in which a Palestinian toddler was killed and from which his parents later died. Following these events, Piron delivered a heart-rending speech in the Knesset on the link between patriotism and morality. The Knesset members who made the headlines, however, were those who provocatively called on Prime Minister Benjamin Netanyahu to resign.

“It was then that I realized that this isn’t my home turf. I don’t know how to be defiant, and I don’t want to have to consult with a strategist to give me a catch phrase that will grab media attention,” he told Kadmon. Later during the interview he added, “It was only in the last elections that I realized that people had actually voted for me, that they thought of me before casting their ballot. I felt a sense of duty for those people who wanted me to be in the Knesset. But before long, I realized that what I need is to have students and that my skills cannot be fully realized in the Knesset.”

Meanwhile, six months was enough for Gal, a former journalist recruited on the eve of the 2015 elections by former Foreign Minister Avigdor Liberman, whose Yisrael Beitenu Party was doing poorly in the polls. Despite the rumors surrounding the circumstances of his resignation, only Gal's official explanation will be discussed here: “I can make more of a difference as a journalist than I can as a Knesset opposition member.” Gal is right about one thing. As an opposition member, his contribution was mainly a negative one: a thuggish discourse, gimmicks at the plenum and cheap provocations toward Arab Knesset members. Like Piron, who will become a college director, Gal, too, will resume his previous career, hosting a business TV talk show on Channel 20. Presumably, their salaries will be higher than they were in the Knesset.

Despite the differences in circumstances and the individuals themselves, these two resignations are similar in that they enhance the feeling of disrespect toward the Knesset, highlighting a part of the political system that is not conducive to personal growth and development.

The big political parties, until their decline in recent years, were able to recruit people and develop talents who regarded politics as a way of life. The rise of personality driven, monocratic parties, such as Lapid’s Yesh Atid and Liberman’s Yisrael Beitenu, has led to depreciation of the political profession. When party leaders practically give away Knesset seats — without any effort made on the part of the candidates — a Knesset seat becomes lackluster and therefore can be passed up relatively easily.

Piron was worthy of the education portfolio. It’s a shame that a person like him shows up for a tour in government and then leaves shortly thereafter because he cannot exercise influence from the opposition. This stems from a failure to understand politics, of which serving in the opposition is an integral part. Just as Rabin and Sharon were at times mere rank-and-file Knesset members serving the public from the opposition, Piron could have done the same through legislation and other parliamentary activities that are not as glamorous as the Ministry of Education but can still make a difference.

It is possible that Piron, accustomed to being on the front pages, had a hard time acclimating to being only one of 120 Knesset members. He can be criticized for this. He really did betray the public's trust, especially that of the people who voted for him. Yet this point aside, one should look at the broader picture: Israel's political and partisan systems continue to disintegrate. As long as changes are not made to the current system to resuscitate the large, democratic parties, Piron and Gal will not be the last people to jump on the political bandwagon and quickly jump off. ​