Amid security concerns, Iraqi authorities decided in mid-July to close the only border crossing with Jordan, leaving the once-busy trucking route between the two countries deserted. 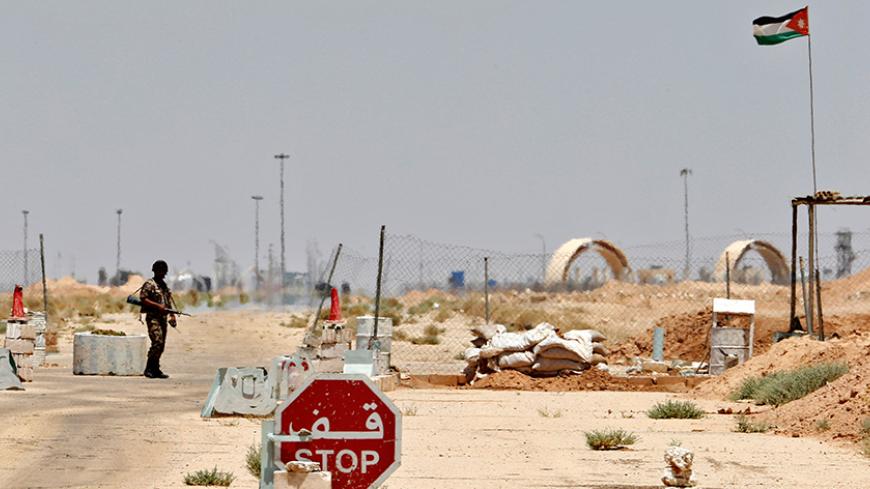 RUWAISHED, Jordan — Although talks are underway in the Iraqi capital to reopen the country's only crossing to Jordan, one fact remains. The once-thriving trucking route between the two countries has been reduced to an empty gray strip, indistinguishable from the black basalt rock and sand of the surrounding desert, long before the closure on July 16.

Authorities in Baghdad decided to shut operations last month, in the hope to interrupt the flow of revenues to the Islamic State (IS) from commercial trucks traveling across Iraq. Jordanian officials confirmed the closure shortly after. But sources inside Iraq see the move as a security measure, amid ongoing military operations across the restive Anbar province.

Since the area tumbled into turmoil in January 2014, truckers crossing into Jordan have faced such heightened risks on the long connecting highway that it has become known as the "highway through hell." Drivers earlier this year reported being given an IS-stamped receipt to show to the next group of militants farther down the road, as evidence they paid their way. Fees from the militants could reach up to $300.

Bolstered by Sunni and Shiite militias, Iraqi government forces have been battling IS militants in the western Anbar governorate for months with minute success.

Baghdad has yet to confirm an official decision about the highway's reopening. For now, the road to Jordan’s Karameh border crossing remains empty, aside from a few military minibuses quietly vanishing behind the iron border gate.

The crossing — which is located 360 kilometers (220 miles) east of Amman, 80 kilometers (50 miles) from the nearest civilian center, and 560 kilometers (350 miles) from Baghdad — connects the Hashemite Kingdom to Iraq’s vast Anbar province. IS militants captured its capital, Ramadi, earlier this year, and also captured control of the nearby city of Fallujah.

“The trucking route from Jordan to Iraq was once a prosperous route that generated as much as $1 billion in trade a year,” president of the Jordan Truck Owners Association, Mohammad al-Dawood, told Al-Monitor. “The toll of our loss due to the closure of the borders both between Iraq and Syria has exceeded so far 525 million Jordanian dinars [$741 million].”

Dawood said Jordan stopped sending lorries inside Iraq some six months ago, amid a volatile security situation across the border, and Jordanian truckers are now forced to work inside the country or export goods in a much longer and less remunerative journey to Gulf countries.

After a takeover of the crossing by Sunni insurgents last year slowed border traffic dramatically, the closure in mid-July was the final nail in Jordan’s economic coffin.

When Al-Monitor visited the area on Aug. 4, only two young soldiers patrolled Jordan’s side of the border. They escaped scorching summer temperatures under the shadow of a carport, slouched inside an armored vehicle and puffing on cigarettes, M-16s dangling from their shoulders.

Around them, dirt mounds dotted the desert where a blank billboard stood out. Neither movement of troops nor machinery could be seen; only sporadic shelling from across the border broke the silence.

But all this apparent calm on Jordan’s side presents a surreal backdrop. Across the border, one is catapulted into the heart of IS territory, where attacks, killings and kidnappings are the everyday drill.

The latest of a string of incidents saw an IS suicide bomber kill two Iraqi army generals north of the province’s capital of Ramadi on Aug. 27. A similar attack followed two days later, when five other officers were killed close enough to the border to take their bodies to Amman before being flown back to Baghdad.

“Ongoing discussions to reopen the crossing are a good indication from Baghdad that security in this small area has improved and there is no real threat in this spot,” Fayez al-Dweiri, a retired major general in the Jordan army and a military analyst, told Al-Monitor. “But we need to keep in mind that the border is 182 kilometers [113 miles] long, and the Jordanian army is responsible for its security on both sides, as it cannot count on the support of the Iraqi army to patrol the border.”

The more than yearlong IS occupation of Iraqi areas bordering Syria and Jordan has put the kingdom in a “very risky” situation, Dweiri said, which has led Jordan to rethink its military strategy on the border.

“Amman first increased the number of troops deployed there and then later sent its ground [troops] to support the border guards,” Dweiri said. “Just because IS’ priorities mainly rest inside Syria and Iraq right now, it doesn’t mean it’s not also trying to enter the country — we need to bear in mind that no one can ever be completely sure of border resilience.”

According to Dweiri, Jordan is playing a lone war to protect its territory.

“Following the collapse of the real Iraqi army in 2003 [Saddam Hussein’s army], Baghdad has failed to establish a new real army. Troops are made up of Shiite-dominated units loyal to former Prime Minister Nouri al-Maliki or affiliated to Iranian forces. Today’s high-ranking generals were just sergeants a few years ago.”

Meanwhile, frustration is running high in Jordan. Dweiri added, “There is no coordination with the other side. Defense and prevention are completely up to Jordan.”

But government spokesman Mohammad al-Momani told Al-Monitor that Amman and Baghdad were instead in constant contact in joint efforts to stabilize the border area.

“We hope military cooperation will reach a level both countries can benefit from to ensure the security and safety of the borders,” Momani said.

The United States, a staunch ally of Jordan and the leader in the international coalition against IS, has so far flushed the kingdom with military and financial aid. US Ambassador to Jordan Alice Wells said in an interview Aug. 26 with Jordanian daily Al-Ghad that the assistance the United States provides to Jordan will reach this year some half a billion dollars.

The United States has also provided the latest surveillance radar technology to Jordan to secure its borders. Meanwhile, Washington is working with the Jordanian government to explore new ways to fight terrorism and provide military equipment similar to Black Hawk helicopters to enact a rapid reaction in case “extremists were trying to cross the border,” Wells said.

“Jordan is now in a war, and we have to admit it,” she said. “So we brought teams of military officials and representatives from the US State Department to meet their Jordanian counterparts and discuss how to speed up the delivery of equipment, and how to give priority to Jordan, even if this means taking equipment from US military stocks.”

“Keeping the vast majority of the Jordanian army at the country’s borders is becoming unbearable cost-wise,” the general said. “We need either the Gulf states or Western countries — especially the United States — to further step in with assistance.”

But the border closure is already claiming economic casualties in Jordan. In Ruwaished, the last Jordanian town before the border and hub of machine shops and car washings, almost all businesses were closed.

Yassin Abdallah, a blacksmith, told Al-Monitor he used to be busy fixing truck machinery in a local auto repair shop, but business came to a crashing halt after the closure.

“Last year the problems started and the number of customers dramatically dropped, but we somehow managed. Now it’s completely gone,” he said. “We fear the current situation and the lack of work more than IS. If the situation stays like this, I will just close my shop and sleep forever.”