Why Israelis are happier than ever

Recent surveys indicate that the average Israeli is happy, optimistic and likes having children despite existential security threats from near and far. 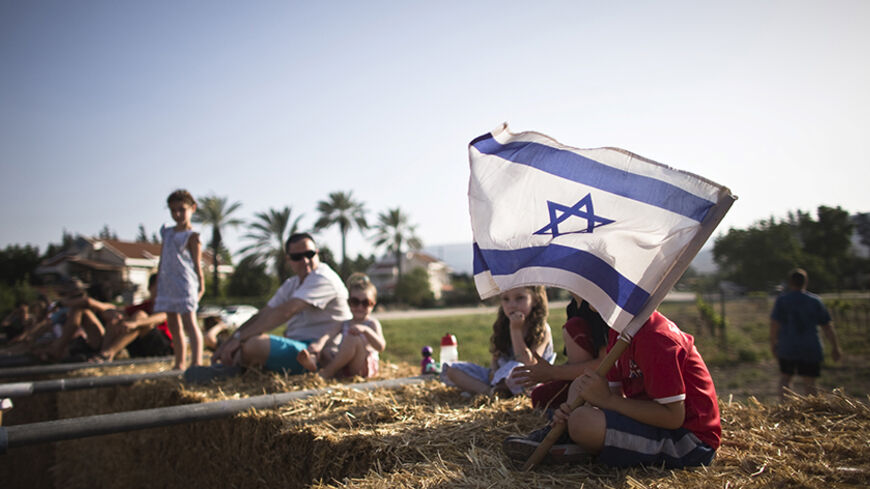 Children sit on bales of hay at the annual harvest festival on the shores of the Sea of Galilee, northern Israel, May 23, 2015. - REUTERS/Ronen Zvulun

In the various happiness and optimism indexes published by international organizations including the United Nations, Israelis practically always end up near the top. Despite Israel being the only state in the world whose existence is still not a foregone conclusion, being constantly questioned and having its entire population under the continuous threat of hundreds or thousands of rockets and missiles, Israelis display a great deal of vitality according to the various happiness indexes, coming in way ahead of peaceful European states and powers like the United States and Russia.

This is a well-known Israeli paradox that makes the tiny country, surrounded by enemies and in a constant state of war, a type of paradise tinged with hell. This impossible mixture occasionally produces miracles. A recent family life index by the Expat Insider publication InterNations ranked Israel fourth among the best countries in which to raise a family. Austria came in first, followed by Finland and Sweden. Israel was well ahead of Britain, Germany, the United States and other economic powers. If you ask the average Israeli, he or she will tell you that they are afraid of threats to the country's security, stressed by economic pressures, on edge because of constant tensions — and that’s why they’re happy. Yes, that’s the way it is.

Yom Kippur, the Day of Atonement, on Sept. 22 is an excellent opportunity to reflect on this issue. On Sept. 13, Rosh Hashana, the Jewish New Year, two major polls in Maariv and Haaretz sought to get a read on the average Israeli’s soul. Both surveys, but particularly the Maariv one, reflected an amazing internal paradox. In the Maariv survey, respondents were asked how things had changed over the past year in three areas: personal finances, personal safety and the general state of the country’s defense. Respondents reported a decline in all three areas. Some 35% said their personal finances had deteriorated (only 26% said they had improved); in terms of their personal sense of security, one-third reported a deterioration (only 23% felt an improvement) and the responses involving national defense were similar. When asked whether they were better or worse off in general today compared to the end of the previous year, 29% reported being better, and 22% said things had gotten worse. Even in the broader context, when people were asked how they think Israel will fare a decade from now, one finds optimism. Of the respondents, 39% think things will be better than they are today, whereas only 26% think things will be worse. In other words, Israelis are reporting that they are doing worse in terms of finances and personal security, but then claim that their overall situation has improved.

All of the above is being conveyed at the same time, by the same people, about the same questions, in the same place. Not only that, Israelis are convinced that the future augurs well, even as the Middle East is crashing down around them with explosive force, terrorist organizations are massing along the fences of the only truly democratic state in the region, Iran is getting an international license to establish a new Persian empire stretching from Tehran to Beirut and the campaign of de-legitimization against Israel continues full steam ahead around the world. There is good reason why Israelis often end a conversation or a meeting with the expression “Things will be good.” Indeed, they seem to believe so.

Israelis' optimism and vitality are not only reflected in public opinion surveys. Many articles have been written about the stable Israeli economy. Israel is considered a high-tech nation and Israeli ingenuity has gained a reputation far and wide. One can see these trends in fertility rates as well. Israel's average birthrate per family — close to three children in 2013 — is far higher than that in the West. When walking around Tel Aviv, the number of children, babies, strollers, young mothers and pregnant women catches the eye. Israel is a fertility powerhouse and not only because of the high birthrate among the ultra-Orthodox and Arab populations. Even secular Israelis love children, have children and regard the raising of children as their life’s mission and its true significance. They look around, purse their lips and ask themselves, “What kind of world have we brought our children into?” And then they have more of them.

What is the secret of Israeli vitality? The formula has yet to be deciphered. In my opinion, the existential hardships and constant threats looming over Israeli society are responsible for the bursts of adrenalin that energize and spur Israelis on. Everything in Israel is to the extreme, honing the senses, awakening existential instincts, galvanizing people and making life much more interesting and challenging than in the (relatively) calm, peaceful and affluent Western countries. These societies have lost their basic instinct for survival. Fertility is far below the bar in determining growth or extinction. To survive, a society needs a replacement birthrate of about 2.18 children per family. In several European states, the rates are much lower. The famous Chinese curse “May you live in interesting times” is fully fulfilled in Israel, and it turns out that it’s a blessing. Life here is interesting, even fascinating, and that makes Israel a difficult place to live, dangerous, somewhat loony and apparently an optimistic and happy place as well.

There are more interesting facts. According to the Haaretz poll, 98% of Israeli Palestinian citizens believe in God, whereas “only” 70% of Jews do. The happiness index in conjunction with religiosity yielded an interesting conclusion: The more religious you are, the happier you are. Among ultra-Orthodox Jews, 78% are happy; 74% of religious Jews are happy; 64% of those who define themselves as “traditional” are happy; and 59% of secular Israelis report a sense of happiness. Being happy is far easier under the auspices of God. When examining happiness among the various religionists, one again finds fascinating results: The Druze are the happiest population in Israel at 86%. Among Christians, only 71% say they are happy, among Muslims, 68%; and among Jews, 64%.

Among the Jews, 12% define themselves as ultra-Orthodox, 12% as religious, and 9% as traditional-religious. In sum, 33% are religious to some degree. An additional 23% define themselves as traditional but nonreligious, while 42% describe themselves as secular. The percentage of secular Israelis in Jewish society continues to erode. They are no longer a majority of the population, but they are still the largest group. If one adds nonreligious traditionalists to them, they total 65% of the population, a figure that explains why 61% of Jews said they drive or ride in a vehicle on the Sabbath (contrary to Jewish religious law), compared with 37% who do not.

A large number of Jewish Israelis are currently observing the fast of Yom Kippur. Although the nonreligious population still makes up 65% of Israeli society, annual polls indicate that between two-thirds and three-quarters of adult Israelis fast on Yom Kippur. This special day, around which a national consensus has developed, is far more than a religious occasion. For Israelis, the Yom Kippur fast is a statement of belonging — to a religion, to a people, to a history. Yes, it is also good for the figure. We gorge ourselves on almost every one of our interminable seasonal holidays. It’s only fitting that for one day, we abstain.