What's in store for the future of Turkish-Israeli relations?

After trying to mend Israeli-Turkish relations and ahead of the Turkish general elections set for November, President Recep Tayyip Erdogan has reverted to attacking Israel. 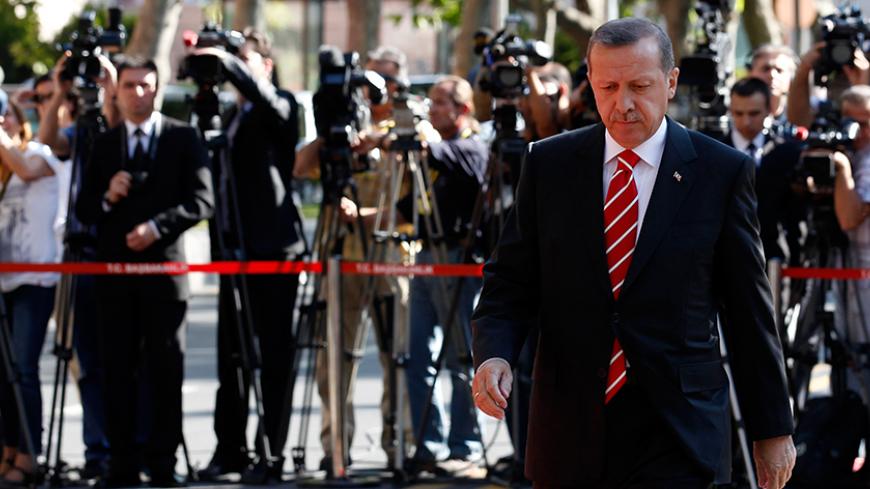 Where is Salah al-Arouri these days? Where is the Hamas activist Israel claims has turned Turkey into a base for planning, funding and launching terror attacks in Gaza and the West Bank? It depends on who you ask. Several months ago, Arouri traveled from Turkey to one of the Gulf states in what was perceived in Jerusalem as a Turkish response to Israeli protests against the warm and supportive hospitality he was granted in Istanbul. These objections were conveyed through the few diplomatic and intelligence channels still operating between the two countries, American and European mediators and public statements.

In recent weeks, top Israeli defense and diplomatic sources have told me that Arouri is back in Turkey and has renewed his activity there, for which Israel holds Ankara fully responsible. Senior Turkish diplomatic sources speaking to Al-Monitor on condition of anonymity flatly rejected these claims. According to them, "Arouri left Turkey and has not returned. Israel’s claims are baseless.” Not only that; as far as Ankara is concerned, its insistence on keeping Arouri away from Turkey is yet another in a series of goodwill gestures toward Israel aimed at advancing the process of normalizing ties between the two states.

Upon being named director general of the Israeli Foreign Ministry by Prime Minister Benjamin Netanyahu, one of Dore Gold's first missions was to move forward on the normalization of relations between Israel and Turkey. That process has been stalemated since Netanyahu, who also serves as Israel's foreign minister, decided to hold up the compensation agreement for the victims of the Mavi Marmara flotilla raid unless Turkish President Recep Tayyip Erdogan commits to not attacking him or the State of Israel.

To that end, Gold set up a meeting with Feridun Sinirlioglu, the Turkish government's point man on Israel in recent years. The two met in Rome on June 22 to get acquainted and examine options for overcoming the obstacles to bilateral diplomatic ties. Gold came back from the meeting feeling encouraged, and conveyed as much to Netanyahu. The sense of optimism turned to near euphoria when it transpired that Sinirlioglu, a confidant of Turkish Prime Minister Ahmet Davutoglu and a former ambassador to Israel, had been appointed foreign minister.

At a Sept. 1 Jerusalem meeting with Turkish journalists invited by the Israeli Consulate in Istanbul to visit Israel, Gold heaped praise on his new friend.

At about the same time, less than a month ago, a semi-official Turkish economic delegation visited Israel, the Palestinian Authority territories and Gaza. The delegation’s goal, in cooperation with Israel’s Coordinator of Government Activities in the Territories, was to move forward a stalled multinational project to establish an industrial zone in Jenin.

The visit aimed to advance the initiative and establish some 130 manufacturing plants in a variety of industries, with Turkish funding and under Israeli auspices, employing thousands of Palestinians. Members of the Turkish mission met with the Israeli Deputy Minister for Regional Cooperation, Likud member Ayoub Kara, and many in Turkey and Israel regarded these moves as harbingers of a rehabilitation of ties between the two states, estranged ever since Israe Defense Forces troops took over the Mavi Marmara flotilla in 2010 and killed 10 Turkish activists. Diplomatic sources in Israel with whom I spoke at the beginning of September expressed optimism about the possibility of overcoming the deep distrust between Erdogan and Netanyahu, but stressed that the entire process would have to wait until after the parliamentary elections called by Erdogan for Nov. 1.

Ever since Erdogan’s blatant attack against Israel during Operation Protective Edge, the Turkish president has indeed toned down his pronouncements against Israel. During the last parliamentary campaign, he refrained from attacking Israel. As president he did not run in those elections directly but played a very active role in the campaign, hoping to change the constitution and imbue the presidency with executive authority. His Justice and Development Party did, in fact, gain a majority in parliament, but for the first time it was not an absolute majority, and the resulting coalition partnership did not enable the constitutional change he wanted. Erdogan was defeated.

But he is not giving up. After calling for new elections, he was back singing old tunes. He took the opportunity of the escalating violence on the Temple Mount to once again attack Israel. At a Sept. 14 meeting with Hamas political chief Khaled Meshaal, who is once again a welcome guest at the presidential palace in Ankara, Erdogan said Israel was harming Islam’s sanctities at Al-Aqsa Mosque.

All of the above, in addition to the information pointing to Arouri’s return to operating against Israel from Turkish soil, have reportedly led senior officials in Jerusalem to directly blame Erdogan for the incitement on the Temple Mount. Once again the reconciliation with the Turks has been shelved.

Despite the tensions, both Erdogan and Netanyahu have a clear interest in restoring the relationship between the two states. Both understand that the most beneficial way to make use of Israel’s natural gas reserves in the Mediterranean is to sell the gas to Turkey and to get it there through an underwater pipeline.

But before all else, Erdogan needs an absolute victory in the Nov. 1 elections that will enable him to change the constitution and become a president with broad executive powers. To that end, he is pulling out all the stops. He disrupted the peace process with the Kurds, renewed the war against them, joined the anti-Islamic State coalition and last week greatly surprised everyone by expressing willingness to allow Syrian President Bashar al-Assad to remain in power.

Had he thought that improving relations with Israel could have helped him achieve his political goals, there’s no doubt he would have done so. Therefore, what happens between Israel and Turkey after the November elections depends on the power Erdogan obtains.