What will it take for US to restart Israeli-Palestinian peace talks?

Any negotiations over an Israeli unity government must include a demand by the Zionist Camp for a clear path leading to negotiations, based on the 1967 lines, with stringent security measures and at least a qualified acceptance of the Saudi initiative. 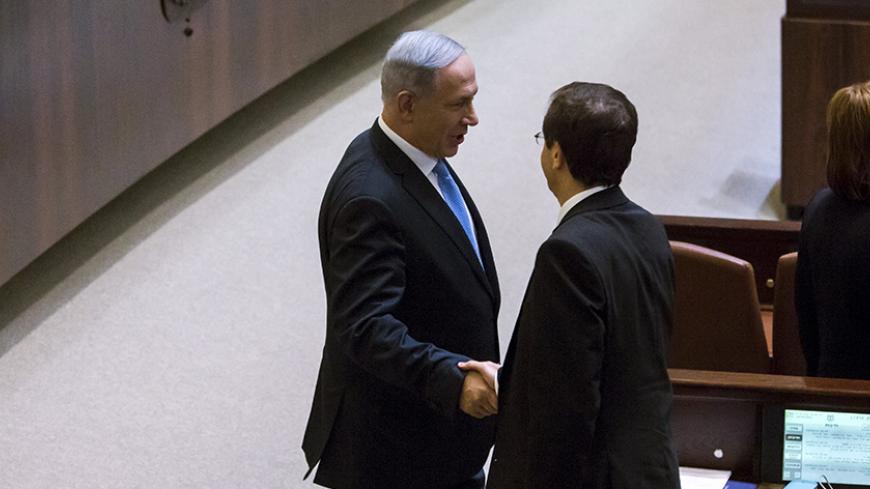 Israeli Prime Minister Benjamin Netanyahu (L) shakes hands in Jerusalem on May 14, 2015, with Isaac Herzog, co-leader of the Zionist Camp, after being sworn into office in the Knesset, following the mid-March general elections.

This moment — with what is currently happening in Israel and the West Bank — is an opportune time for the US administration to get re-involved in favor of a viable peace process leading to a two-state solution. Actually, the volatile situation on the ground calls for it. Violence has become the daily law of the land, primarily in East Jerusalem.

Washington is aware of this; officials dealing with the Middle East are torn between two views: One believes that there is no chance to succeed in bringing the Netanyahu and Abbas governments together for any kind of political progress on a permanent status agreement, while the other says that without any movement toward a two-state solution, the current violence may deteriorate into a full intifada, or even worse.

These two views also reflect an apparent divide between the White House, which is completely disillusioned in the aftermath of the failure of Secretary of State John Kerry's efforts in 2013-14, and the State Department, which is encouraged to act by its various delegations in the Arab countries.

A senior State Department source involved in Middle East policy planning told Al-Monitor on condition of anonymity that it is clear from their East Jerusalem Consulate contacts with the Palestinian leadership that halfway measures will not suffice. The source expects President Mahmoud Abbas, during his United Nations General Assembly speech on Sept. 30, to issue a blatant warning to the international community, or even attempt to shake the current status quo in relation to upholding the Oslo Accord: "We are communicating with both parties about the need to curb unilateral acts of violence and settlement expansion. We are conveying to Israel that, without a peace process, it will be difficult for the US to stop international initiatives at the United Nations. Yet at this point, we won't go beyond these communications."

The senior official added that the administration could contemplate initiating a renewed peace process only with a change of the composition of the Israeli government through the creation of a national unity government with the Zionist Camp. Yet, the United States would refrain from any position or involvement to bring about this change.

It is no secret that informal talks are taking place between Prime Minister Benjamin Netanyahu and his people and Zionist Camp opposition leader Yitzhak Herzog and his representatives, in which the key stumbling blocks are disagreements over an eventual peace process and the role of the Zionist Camp in the decision-making process.

At the same time, the Palestinian Authority leadership, aware of the US diplomatic passivity, is contemplating its next moves. All signs point in the direction of a unilateral move, such as the threat to abolish the Oslo Accord, the security cooperation between the Palestinians and Israel, or even the authority itself.

Asked about the eventuality of a renewal of negotiations with Israel, a senior Fatah official in Ramallah told Al-Monitor on condition of anonymity, "It takes two to tango and Netanyahu is only preoccupied with settlement expansion and upholding his coalition with [HaBayit HaYehudi leader] Naftali Bennett." He added, with great skepticism, "Even in the case of a national unity government, we would have clear conditions in order to renew negotiations in a way that would ensure a two-state solution — Israeli unity governments are a recipe for negotiations for the sake of negotiations."

The Fatah official, who has been close to most past negotiation teams, listed the conditions for the renewal of "effective negotiations."

First, he said, Israel must, at the outset of negotiations, present a proposal for a permanent border and it must be based on the 1967 lines. He said that security arrangements must be stringent on both sides, without infringing on Palestinian sovereignty. He stressed that negotiations and the implementation of the agreement cannot be open-ended and cannot surpass a two- to three-year timeline, with a freeze on settlement expansion during this period. He also added that the Arab Peace Initiative of 2002 should serve as an umbrella for the negotiation, which would allow the normalization of Israeli relations with the Arab countries after the end of the occupation.

According to this source, the Palestinian leadership is united on these positions. Its forceful stand on eventual unilateral moves, or clear conditions for negotiations, both stem from the failure of the Kerry talks on the one hand, and the outcome of the Israeli March 17 elections on the other.

These are positions that the United States and Israel must take into account. This is true also for Yitzhak Herzog. If he wishes to join a unity government for the sake of a two-state solution rather than Israel being doomed to being a binational state, he must have — as part of a possible agreement with the prime minister — a clear path leading to negotiations, led by him, based on the 1967 lines. This path must also include stringent security measures and at least a qualified acceptance of the Saudi initiative.

Any other basis for a new coalition will end up in deadlock and a dangerous deterioration of the current situation into violence.