France is urging Israelis and Palestinians to resume negotiations in anticipation of an international peace proposal being presented. 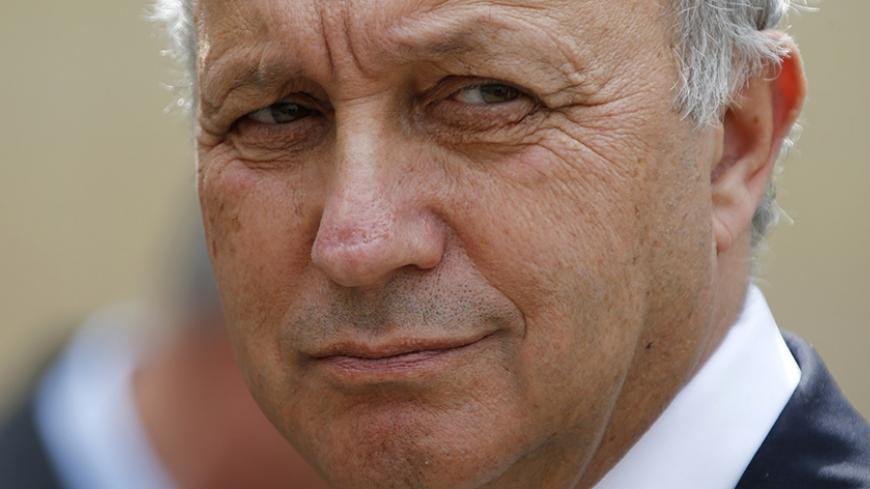 According to the May 8 London daily Al-Quds al-Arabi, a senior Palestinian official said the United States and the European Union are urging the Palestinian Authority to resume peace negotiations with Israel. Both the Americans and Europeans probably know, however, that given the composition of the new Israeli government and Palestinian President Mahmoud Abbas' reaction to it, this is a "mission impossible." Yet, to unblock the peace process, an international proposal must at least be put on the parties' table.

A senior official at the French Foreign Ministry speaking on condition of anonymity told Al-Monitor of a visit by French senior officials to Ramallah at the beginning of May. The officials reportedly conveyed that a move at the UN Security Council would be more effective after a renewal of peace talks — or at the very least after significant efforts to revive the peace process — rather than immediately launching such an initiative. He said that Paris is keeping Washington informed of its diplomatic moves and plans. Perhaps surprisingly, the French official was hopeful that progress could be made.

"Abbas may want to show flexibility in order to facilitate later on a move by the international community. [Israeli Prime Minister Benjamin] Netanyahu may want a reasonable proposal to use it as a basis for a reshuffle of his Cabinet toward a national unity government with the Zionist Camp party," the official said.

Paris, and probably Washington, would like to advance such a tactical move to open the way for a peace process in the fall, after a nuclear agreement with Iran is finalized. French Foreign Minister Laurent Fabius is apparently adamant about the issue. According to this source, the French have in mind at least six main elements for their autumn initiative.

The first and basic element is a two-state solution, with the border based on the 1967 lines and mutual land swaps (for the sake of Israeli settlements). The second element concerns maintaining Jerusalem as a unified city but a shared capital, with Israeli neighborhoods and Jewish holy sites controlled by Israel, and Palestinian neighborhoods and Muslim holy sites by Palestine. The third element involves border security arrangements, including a temporary Israeli presence along the Jordan River and deployment of international forces. The Palestinian state would be demilitarized. The fourth element, the Palestinian refugee issue, would be resolved in an agreed and joint manner. The fifth element requires mutual recognition of two nation-states and an end to the conflict. The sixth element is establishing a timeline of two to three years for negotiations as well as implementation.

Two months ago, when the French proposed a draft resolution at the UN Security Council, Abbas made it clear that Paris' position was unacceptable to him. The Palestinians insisted on minimizing the land-swap areas, defining them as minimal and parallel, meaning that similar, small-sized areas from Israel and Palestine would be swapped. They also sought to limit any Israeli security presence at the Jordan River to the timing of the withdrawal (up to two years). In addition, they wanted stronger wording in regard to Palestinian sovereignty over East Jerusalem and the Temple Mount plus a two-year timetable for ending the occupation.

Netanyahu, on the other hand, is today even further away from the French and US positions. In the platform of his new government, there is not even mention of the principle of a two-state solution, whereas a major expansion of settlement construction can be foreseen. This was also evident in the fierce debate between the heads of the Israeli and French Foreign Ministries in a meeting held May 10 in Jerusalem.

The Israeli side accused the French of being one-sided, in favor of the Palestinians. The French concluded that the present composition of the Israeli coalition has led inevitably to deadlock, and the parties to the conflict can reach common ground only through the creation of a national unity government in Israel, with the inclusion of the Zionist Camp. French thinking on proposals takes into consideration this political reality. According to the French source, Paris is cautiously assessing what the policy parameters of a more moderate government in Israel could be, but without interfering in the internal Israeli political process. The French and Americans believe that an Israeli national unity government is probably just a matter of time. The 61-seat majority of the new Netanyahu government is considered untenable.

US President Barack Obama has recently on more than one occasion expressed the need for a two-state solution and his disappointment that this apparently is not the position of the new Israeli Cabinet. The prospective US position, once there is political realism in Jerusalem as well as in Ramallah, is clear in view of the framework proposals made by Secretary of State John Kerry last year. The US proposals are similar to the French positions currently being outlined, although more vague on East Jerusalem, and from Israel's point of view, more forthcoming on security arrangements, in Israel Defense Forces deployment along the Jordan River and in completely rejecting the notion of a timeline.

The basic positions, however, are what Washington and Brussels expect a new Israeli government to accept as the bases for negotiations. They also expect Abbas to show more flexibility than the stance he took in the spring of 2014. In any case, no serious movement on such proposals will take place before the Iran agreement is reached and before it is accepted by Congress.

The French are probably right in feeling a sense of urgency. Given Palestinian frustrations and despair, the situation is like a tinderbox that could erupt into violence before the international community is ready to engage. Although a policy proposal is necessary, the lesson learned from the last Kerry initiative is that before crafting a proposal, the right conditions must be created — namely, a settlement construction freeze by the Israelis and a halt to unilateral diplomatic activity by the Palestinians at the United Nations.

Thereafter, a proposal should be presented, not only to the two principal parties but also to others in the region, including Egypt, Jordan and Saudi Arabia, thus creating a broader, regional process. The proposal should serve only as a basis for negotiations, to be conducted by the international community, together with a timeline not to exceed two years for negotiations on ending the occupation and the conflict.