Will the Palestinians abolish the Oslo Accord?

Growing despair might drive Palestinian leadership to announce the abolition of the Oslo Accord, which would lead to chaos and consequently breakouts of violence. 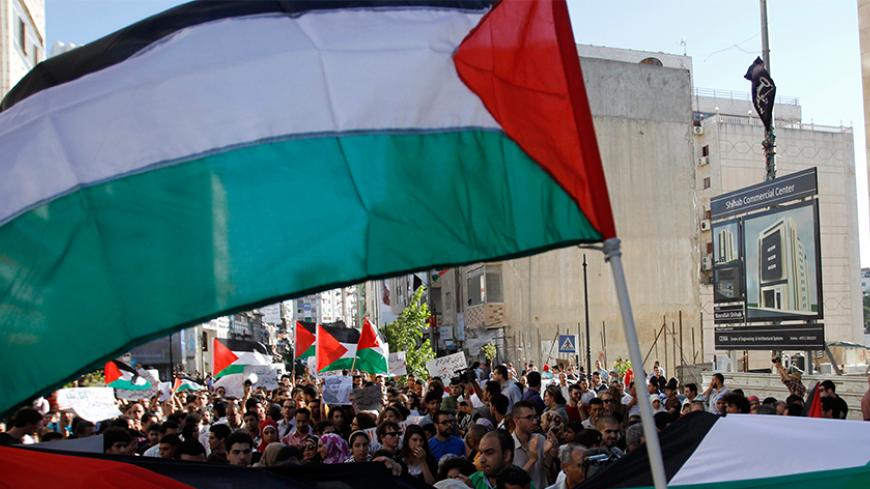 Palestinians wave flags during a protest in the West Bank city of Ramallah, July 3, 2012, calling for an end to the Oslo Accord, which was meant to pave the way to permanent peace with Israel. - REUTERS/Mohamad Torokman

There are growing expectations within the Palestinian Authority (PA) for President Mahmoud Abbas to make a game-changing decision, as it is now clearer than ever that the status quo of the occupation is intolerable and not about to change. Unlike other periods of growing crises, the sense in the Palestinian street is now that the ball is in the Palestinian court.

A senior PA and PLO official who has much insight into the thinking at the Muqata, the PA headquarters in Ramallah, spoke extensively and anonymously to Al-Monitor about the looming crisis: “This is the worst moment since the Oslo Accord. When it comes to the Israeli government, we lost hope a long time ago. We were assured time and again by US State Department representatives that after the Iran deal debate in Congress, they would renew their peace process efforts for a two-state solution. [President Barack] Obama won on the Iran deal, but a Palestine deal seems to be the furthest thing from his mind. [French Foreign Minister Laurent] Fabius and others at the helm of the EU have assured us about passing a [UN] Security Council resolution with a timeline for the creation of a Palestinian state. All we hear now is about some weak measures on labeling goods from Israeli settlements. The Arab world is turning its back on us. The leaders are preoccupied with their own political survival. The only ally we have is Arab public opinion, but in the various dictatorships, it has little impact. Those leaders in the US, the EU and most Arab states are indirectly giving a green light to [Israeli] Prime Minister [Benjamin] Netanyahu to continue the policies of gradual annexation through unrestrained settlement expansion. [HaBayit HaYehudi head and Education Minister] Naftali Bennett has more impact on the Israeli-Palestinian issue than anyone else.”

He said that he was more frustrated and disillusioned than ever before, and that his current mindset is shared by most Palestinian leaders. “Enough is enough,” he said. “It's time for us to go on the offensive.”

When asked by Al-Monitor what the plans of the leadership are, the senior Palestinian source replied with some caution. He said, “It is very likely that the Palestinian leadership in the months to come will announce the abolition of the Oslo Accord. This most probably will not mean the dissolving of the [PA] itself; that may come at a later stage.”

He added that the purpose of such a move would be to galvanize Palestinian public opinion behind a prolonged struggle for statehood that, from now on, would be led by them, with little expectation of international intervention at this point. The only diplomatic move contemplated within this initiative is to seek the support and legitimacy of the Arab League for a new stage in the Palestinian struggle.

The passage to Jordan would no longer be under joint control, as it is today, which could create havoc at the most sensitive entry points into the PA. Security cooperation was a central part of the two Oslo pacts (the 1993 Document of Principles and the 1995 Interim Agreement), which speak extensively of cooperation on security and of each side's responsibility to prevent terror.

With the abolition of the agreements, the security cooperation would be stopped.

The Palestinians would pay a significant economic price as they are dependent on Israel for infrastructure, such as water and electricity, as well as levying taxes for the entry and exit of goods at the international passages.

According to this source, the Palestinians would not abolish the PA, but may contemplate declaring statehood (under occupation).

From experience, it is hard to predict whether this plan will indeed be carried out, but it is definitely on the minds of the Palestinian leadership.

For Israel, that would signify a tremendously difficult challenge as one can safely assume that the international community would place the onus for the eventual chaotic situation on the Israeli government, for having rejected various proposals for a viable peace process.

There is one way to prevent this dangerous development that could lead to wider violent conflict: Begin serious negotiations on a two-state solution, based on the 1967 lines, with US and other international support. This is, for now, the last thing on the mind of the Israeli prime minister.