Iraqi cartoonists are targeted for their drawings that criticize corruption and Islamic political parties in the country. 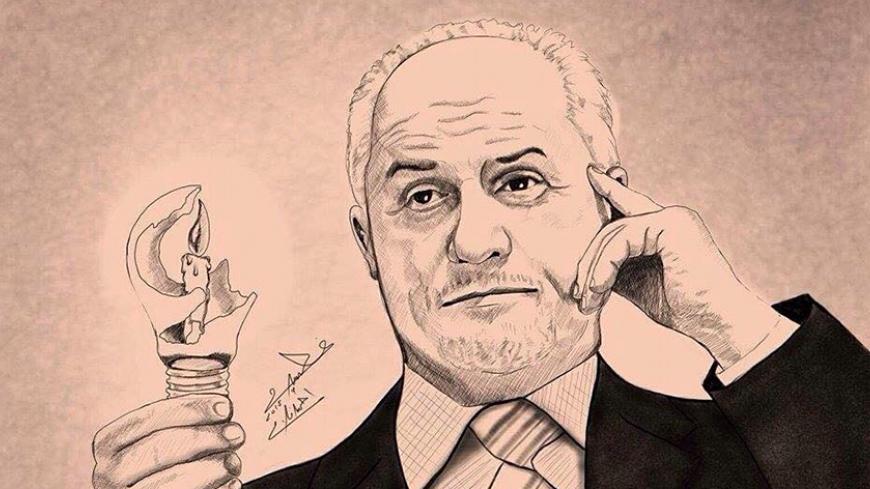 A cartoon by Ahmed Fallah shared on Sept. 4, 2015, pokes fun at the poor state of public utilities in Iraq. The caption on Facebook reads, "Hussein Edison's source of electricity." - Facebook.com/shakwmakw

The caricatures by young Iraqi artist Ahmed Fallah mock and criticize Iraqi politicians. While he and other political cartoonists are threatened, young Iraqis share the drawings on social networking sites and use them during protests to express their anger at the politicians.

In reference to Iraqi politicians’ exploitation of religion and repressive practices against citizens, Fallah drew former Iraqi President Saddam Hussein wearing the turban of a cleric after he was arrested, with a prayer bump on the forehead, mockingly showing his dedication to prayer. The cartoon was popular among Iraqis, who are angered at the level of corruption within Islamic political parties and particularly the clergy, who take advantage of their status to cover up their parties’ corruption and prevent the politicians from being held accountable. Fallah sparked a strong backlash on social media and was forced to flee the country.

In early 2014, before he became famous, Fallah received threats from an armed militia and subsequently moved to Indonesia. At that time, one of his cartoons condemning the corruption in Islamic political parties was used as the cover of Fekr magazine, a small and relatively unknown publication.

In a phone call with Al-Monitor, Fallah said, “I decided to flee Baghdad to Indonesia’s capital, Jakarta, for a short period of time, until the militia [which he did not identify] forgot about me. Yet I could not remain silent for long. The political situation is getting worse in Iraq and keeping silent about the ruling parties is a disgrace in my eyes.”

While in Jakarta, Fallah boldly drew the head of the Sadrist movement, cleric Muqtada al-Sadr, holding a Cuban cigar, as well as former Iraqi Prime Minister Nouri al-Maliki sitting in the courtroom dock where Saddam was placed during his trial for the crimes committed against Iraqis. He drew Ayad Allawi, the head of the Iraqiya List, with a sheet of paper on his chest that read, “He has lost his memory.” He also drew former Deputy Prime Minister for Energy Affairs Bahaa al-Araji wearing a mafia-style fedora.

Young activist Abdullah Lueibi printed out Fallah’s cartoon portraying Transport Minister Baqir Jabr al-Zubeidi as a joker and used it during a protest in Baghdad's Tahrir Square on Aug. 7. Lueibi told Al-Monitor, “I like the cartoons. They show the anger we have in our hearts.”

At the demonstration, Al-Monitor spotted three other young protesters who had also printed out Fallah’s caricatures on large posters.

“It is weird how my caricatures are used during protests, while none of the country’s newspapers have published any of them,” Fallah said. “This proves that the freedom of the media in the country is a big lie.”

With no protection for freedom of expression, cartoonists in Iraq face criticism and threats. Last year, the offices of Al-Sabah Al-Jadid newspaper in Baghdad was hit by an improvised explosive device for publishing a caricature portraying Iran’s Supreme Leader Ayatollah Ali Khamenei. Its artist Ahmed al-Rubaie was forced to flee to Iraqi Kurdistan, where he died from a heart attack. Cartoonist Khudair al-Humairi was referred to court in March following his criticism of the work of the Central Organization for Standardization and Quality Control.

Fallah said, “Following the [publication of the] recent cartoons and after they became widespread in the community, I started receiving threats on my Facebook page and in emails.” He added, “Some of the messages threatened that my family would be killed or beaten.”

Yet Fallah seemed determined to continue to draw. “We should invest in these protests so that we are granted our full freedom — our freedom of expression and our [right] to live decently,” he said, adding, “I am not offending anyone. I am just expressing the irony in the community, peacefully.” He asked, “Do they want us all to carry weapons against the government?”

Ziad al-Ajili, director of Iraq's Journalistic Freedoms Observatory, told Al-Monitor, “The idea of cartoons is not grasped as a purposeful art, but rather as a way to mock the depicted figures. This is how most of the political parties in Iraq view it.” He added, “Ahmed Fallah is not the first cartoonist to receive threats. It is an old problem that was produced by the nature of Iraq’s political systems.”

Iraq is certainly not an ideal environment to express oneself. People are receiving threats from militias or the ruling parties simply because they expressed themselves and their community using satire.

Fallah is hesitant to return to Baghdad. “I am staying here in Jakarta, and we'll see where things go,” he said.