The mystery of Iran's missing ambassador 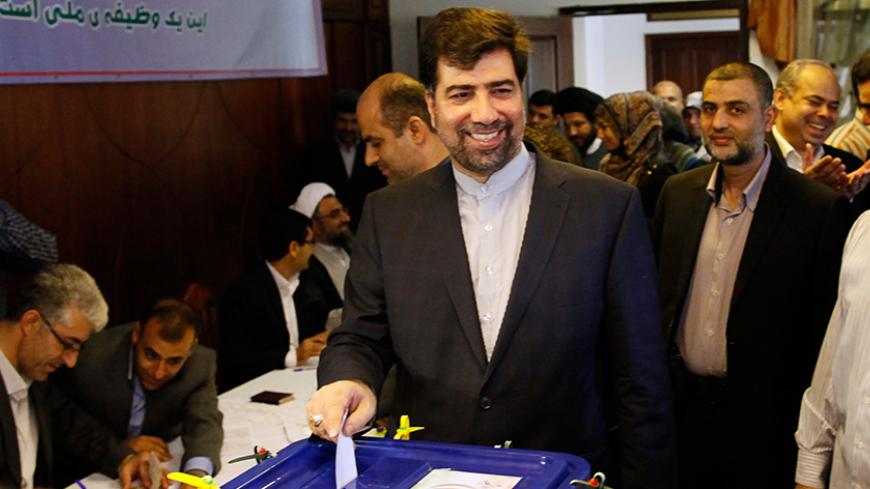 Iran's ambassador to Lebanon, Ghazanfar Roknabadi, casts his ballot at a polling station at the Iranian Embassy in Beirut, June 14, 2013. - REUTERS/Jamal Saidi

Iran’s Foreign Ministry on Sept. 28 rejected claims by Saudi Arabian sources that Iran’s former ambassador to Lebanon had not entered Saudi Arabia for the hajj. The controversy over Ghazanfar Roknabadi, who was the target of an assassination attempt by Saudi nationals in 2013, has brought Iran-Saudi tensions to new heights over the stampede that left more than 226 Iranians dead and more than 300 still missing.

Saudi Arabian-funded Al Arabiya reported Sept. 28 that according to Saudi sources, no one by Roknabadi's name had entered the country through any of the official channels. The sources said, “If it is true that Roknabadi participated in the hajj this year, he entered the country under a fake name.”

Shortly after the Al Arabiya report, Iran’s Foreign Ministry spokeswoman Marzieh Afkham denied the story. She said that Roknabadi entered Saudi Arabia with a regular passport and like all other Iranians, his information was given to Saudi officials for entrance for the hajj.

Afkham added that Roknabadi’s information, along with that of the other missing Iranians, was given to Saudi officials to help facilitate the search. She said, “Media sensationalism about this issue is untrue and is a result of other goals and aims.”

Iranian media outlets were less diplomatic in their doubts of Al Arabiya’s story.

Mehr News Agency showed news footage of Roknabadi participating in a hajj ceremony. The clip was dated Sept. 23, and Mehr reported that any other claim about Roknabadi was intended to “escape accountability for the fate of Iranian citizens and officials in the Mina incident.” Saudi authorities are investigating the matter and have given various reasons why the stampede occurred when pilgrims heading in opposite directions collided in the city of Mina.

The top story on hard-line Raja News, “Creating a scenario for the abduction of Iran’s former ambassador to Lebanon has begun,” claimed that the stories about the “abduction” are related to the bombing of Iran’s embassy in Lebanon in November 2013, in which he was believed to be the target. The double suicide bombing killed 23 people, including Iran’s cultural attache in Lebanon and five Iranian security personnel.

The bombing took place as Roknabadi was scheduled to leave the embassy to attend a meeting with Lebanese officials, leading Iranians to believe he was the target. The Abdullah Azam Brigades, a Lebanon-based al-Qaeda group, took responsibility for the attack. Saudi national Majid bin Mohammad al-Majid, the emir of the Abdullah Azam Brigades, was arrested Jan. 1, 2014, in connection with the bombing. He died in a military hospital a few days later, reportedly from kidney failure.

Raja claimed the Abdullah Azam Brigades is “supported in a special manner with money and intelligence by the Saudi government.” However, the group and Majid were both wanted by Saudi authorities as well.

Asr-e Iran compared Roknabadi’s strange disappearance to that of Lebanese Shiite leader Imam Moussa Sadr, who went missing in 1978 after visiting Moammar Gadhafi in Libya. While the comparison is not apt, Roknabadi is a well-known ambassador and diplomat. After serving as Iran’s ambassador to Lebanon from 2010 to 2014, he did not receive another posting during the current administration and has been teaching at Imam Sadegh University.