On the cusp of no longer facing Western sanctions, Iranian carmakers now face a domestic boycott of their vehicles over price and quality concerns. 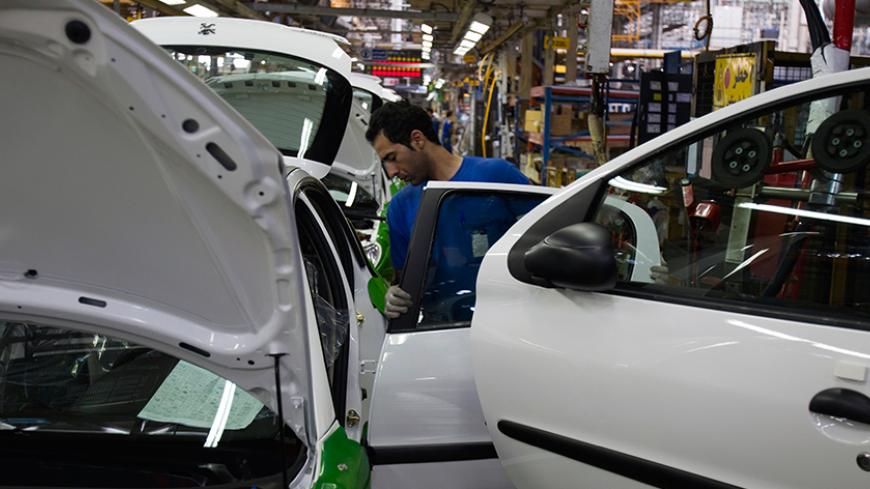 Just as Iranian authorities are preparing for a post-sanctions economic revival, another problem has emerged. A group of Iranian citizens has launched a campaign on social media under the banner “No to Zero Cars.” In Iran, brand-new zero-mileage vehicles are referred to as “zero cars.” Thus, the campaign urges Iranian consumers to not purchase new, domestically made cars. Word of the boycott has quickly spread and in a short span of time created serious problems for the Iranian auto sector — the country’s second-biggest industry.

To be clear, cars are big business in Iran. Local carmakers and related firms account for 12% of total employment. The Iranian auto sector, which has annual turnover of some $12 billion, also supports 60 other industries, such as glassmaking, aluminum, copper, steel, rubber, textiles and paint. With sanctions set to be lifted, the government has plans for expanding the auto industry in the hopes of creating thousands of badly needed new jobs. At the heart of the government’s plans lies the lofty ambition to step up output to 3 million vehicles per year. But getting there won’t be easy — and the current picture is far from rosy.

Ordinary Iranians have for years been complaining about the low quality and high prices of domestically produced cars. Al-Monitor talked about some of the underlying issues that are contributing to this dire situation with Azita — a Tehran-based journalist with a weekly economic journal — who spoke on the condition that her full name not be divulged. Azita was pointed in her criticism and emphasized that the Iranian auto sector is plagued by monopoly, which has resulted in a damaging lack of competition reflected in both the prices and quality of locally made vehicles. She also referred to high tariffs for imported cars and violations of consumer rights as other key factors contributing to the current situation.

Western sanctions, which drastically hit domestic production of cars, coupled with the economic mismanagement of the administration of former President Mahmoud Ahmadinejad have led the price of domestically made vehicles to triple in past years. Meanwhile, the purchasing power of Iranian families has decreased, as salaries have not kept pace with rising prices. Iranian carmakers blame the surge in vehicle prices on currency fluctuations, specifically referring to the severe weakening of the Iranian rial following the imposition of Western financial and banking sanctions under Ahmadinejad. Now, with such penalties set to come off and the currency exchange rate largely stabilized, it is claimed that with new plans set in motion, the quality of domestically made vehicles will improve.

After the conclusion of the July 14 Joint Comprehensive Plan of Action between Iran and world powers in Vienna, Iranian auto industry officials started holding discussions with international auto giants. Their hope is that collaboration with these firms will give local industry access to vaunted state of the art technology. Indeed, their aim is not only to produce cars for the sizable Iranian market, but also to export Iranian-made cars to neighboring countries such as Iraq, Azerbaijan and Afghanistan.

However, despite the nuclear deal and impending lifting of sanctions, the mood among both Iranian auto consumers and producers is far from one of relief. In an interview with Al-Monitor, Amir Hossein Mehrdad, a car salesman who works in Tehran’s central Abbas Abad Street, emphasized that there has actually been a recent decrease in sales of domestically made cars. He said, “Immediately after the nuclear agreement in Vienna, the domestic car market experienced a decline. In the first week, expectations were that European-quality cars, with lower prices, will become available again. Little by little, however, people realized that this is not happening, and at the same time the campaign of boycotting domestically made cars started, and thus this new problem emerged."

Contrary to the expectations of some, word of “No to Zero Cars” has quickly spread and gained support, demonstrating just how skeptical Iranians are when it comes to domestically produced cars. As expected, the major state-owned media outlets initially tried to ignore this campaign. However, “No to Zero Cars” eventually gained such strong traction that, in an unprecedented move, the minister of industry publicly accused the people who started the campaign of “committing treason against our national interest” and went as far as stating that “their actions are counter-revolutionary.” Mohammad Reza Nematzadeh then tried to calm consumers by saying that it is “very natural” that people expect lower prices, but that they should not expect prices to drop at this instance. “It is important to remember that prices did not rise after the nuclear agreement and instead stayed the same,” he said.

But rather than calming consumers, Nematzadeh’s attack on the campaign appears to have backfired. Boycotters of domestically made cars are now even more determined to pursue their cause. Meanwhile, Iranian state television has moved to end its long silence on this issue and aired an extensive segment titled “Should we or shouldn’t we buy Iranian cars?” The report does not make a reference to the boycott campaign. However, it strikingly emphasizes Iranian consumers’ right to freely choose what they wish to purchase, while at the same time asking the question: “And what about our national interest?”

Al-Monitor spoke to an engineer who works for Iran Khodro, the biggest Iranian vehicle manufacturer, to gain an idea of how at least some of those benefiting from the Iranian auto industry feel. He said on condition of anonymity, “I have worked for Iran Khodro for 17 years, and my father is a retired former employee of Iran Khodro. Numerous members of our family, both male and female, work for Iran Khodro; some of them as engineers and some of them as simple laborers. On the one hand, I vehemently oppose this campaign for I know that Iran’s auto industry is providing employment for more than 700,000 people. It has experienced many bad days because of the sanctions and thousands have lost their jobs. In our family, we were worried many times that we might lose our jobs if the economic situation does not improve.”

At the same time — in a display of the mixed feelings even among those most expected to oppose the campaign — the engineer underscored that he cannot oppose the boycott either, saying, “Iranian auto industry officials are working in a monopolized environment. They have thus no reason to strive to improve the quality and safety of their products.”