Why Iran’s auto ambitions will benefit economy, not consumers

Iran appears focused on transforming itself into a regional car manufacturing hub in the coming years — but at what price? 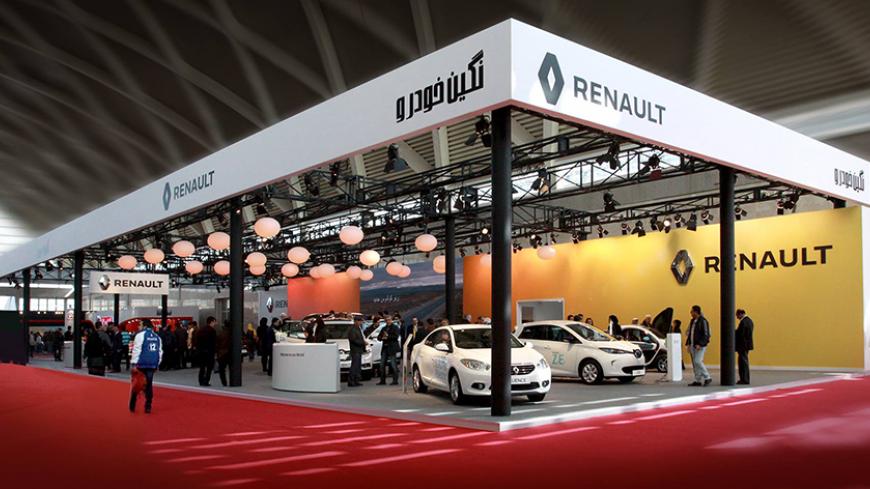 In February, Iran hosted an international auto show for the first time in 11 years. Some two dozen European, Asian and Iranian brands, including Iran’s longtime French partners Renault and Peugeot, took part in the Feb. 14-18 event. Many experts saw the exhibition, which was organized by Iranian and Chinese companies, as an invitation to both global carmakers looking for new markets and Iranian consumers looking for new global brands.

The Tehran Auto Show took place immediately after a two-day automotive conference at Tehran’s Milad Tower, where 400 global manufacturers of cars and car parts gathered to discuss new ways of cooperation. Iranian companies and foreign firms made at least six agreements on the sidelines of the conference, Aftab News reported.

Tehran Auto Show participants included BMW, Scania, KIA, Hyundai, Brilliance and even a Russian brand — UAZ. The latter displayed three models of vehicles and had obviously redesigned its vehicles for Iranian roads and weather conditions. This is the first time in more than a decade, after the Russian GAZelle van, that Russian vehicles are entering the Iranian market.

Saeid Zarepour, the CEO of Tavan Khodro Group, which has entered into a joint venture with UAZ, expressed confidence that the UAZ models will find their place among Iranian consumers when the vehicles arrive in the country in April. He told Al-Monitor that Iranian firms supply 40% of the parts used in the vehicles. He said that providing extensive after-sales service will be a priority for the Russian brand, which he believes is a staunch competitor to Chinese carmakers.

London Taxi, the producer of the most expensive professional taxi cabs in the world, also participated in the Tehran Auto Show, as its managers seek a way into the “booming” Iranian market. The British company partnered with Chinese Brilliance, which is already registered in the northwestern Aras Free Trade Zone. Alex Luo, a manager at London Taxi, told Al-Monitor that the company is negotiating with Iranian officials to enter mainland Iran. He hopes the black cabs will be welcomed in well-off areas in major Iranian cities.

Many other brands are preparing to grab a share of Iran’s 80-million-strong consumer market. However, the government is enforcing the condition that no intermediary company can be involved in joint ventures and that the manufacturer must prioritize providing proper after-sales service.

Iran’s struggle to form a regional automotive hub has so far failed. Indeed, the Iranian industry has yet to fill a distinct role in the domestic market, let alone in neighboring ones. Crippling sanctions, mismanagement and excessive profiteering by some stakeholders involved in the industry were blamed for the failures in the past decade. Now, the government insists it will hit industry targets by producing quality cars for export to regional markets.

On Jan. 18, the semi-official Iranian Students' News Agency (ISNA) reported that at least 11 Iranian car models barely meet the minimum of quality standards. Iran's minister of industry, mine and trade, Mohammad Reza Nematzadeh, said Feb. 4 that his ministry is preparing to increase the number of standards for domestic carmakers to follow from 50 to 83. He said that nonstandard car platforms will have to be phased out. The move, if implemented, would impose substantial costs on the industry, raising the already high prices of Iranian-made vehicles to unaffordable levels.

“Iranian consumers should expect higher prices if they demand quality,” Nematzadeh is quoted as saying by the Young Journalists Club. Trying to justify the likely price hike, the minister pointed to the “correlation” between quality and cost everywhere in the world, saying, “Our objective is to have a minimum price increase, but if safety standards improve, prices will increase accordingly.”

The announcement of potentially higher prices is disappointing, as Iranian consumers already complain about unreasonably high prices. Hundreds of thousands of low-quality domestic cars are sold every year, largely thanks to high import tariffs that make imported vehicles unaffordable for the average wage earner. The recent decision to improve quality will not, however, solve the issues faced by many Iranian consumers. Instead, the policy is widely believed to be aimed at turning the country into a regional car manufacturing hub — but at what price?

The higher standards vowed by Nematzadeh need new car platforms, which the government expects to design in collaboration with European manufacturers. Such an optimistic desire seems to be a “sheer joke,” an Iranian industrialist, who recently entered a joint venture with a foreign carmaker, told Al-Monitor at the auto show.

“Designing a car platform [requires] extensive knowledge in various industrial fields that no country would easily give us, and designing platforms applying local expertise is a sheer joke,” said the industrialist, who spoke to Al-Monitor on condition of anonymity. He said he believes Iran can remain an assembling hub, with platforms designed by global brands and with domestic suppliers producing nonessential parts. Indeed, given the bumpy road ahead for the Iranian auto industry, the government seems to have already given up on the idea of designing car platforms, letting a considerable number of joint ventures form instead.

Iran ambitiously seeks to hit a production target of 3 million cars per year by 2025, up from an estimated 1.3 million cars in the current Iranian fiscal year running to March 20. Even if the platforms are not Iranian-designed, the auto industry’s share of Iran’s gross domestic product should be growing — the key goal of the government. Out of the 3 million vehicle target production, a large portion is projected to be exported to countries that do not care much for quality. As such, regional consumers of Iranian-manufactured cars will be the major winner of Iran’s attempts to produce quality cars. In this equation, it appears Iranian consumers will end up having to pay ever higher prices if they desire better quality, domestically made vehicles.