Experts say the effects of the Egyptian army pumping seawater into the tunnels under Rafah will be disastrous for the Palestinian economy and agriculture. 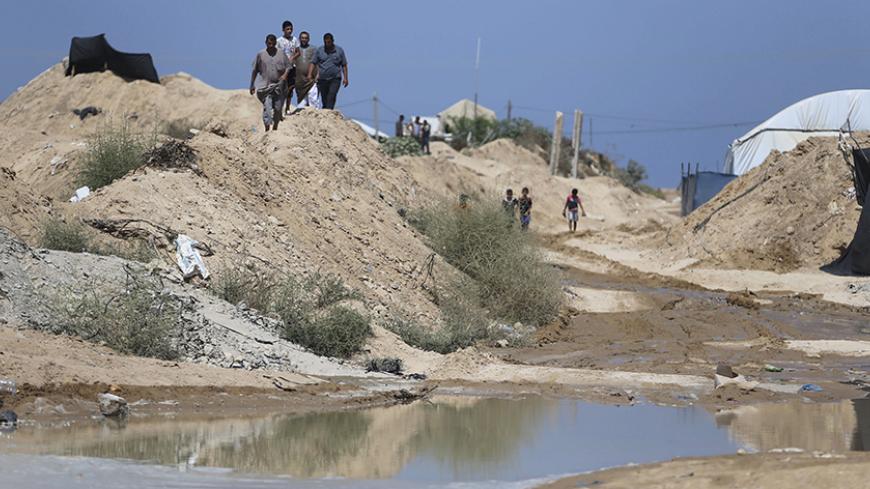 RAFAH, Gaza Strip — The Egyptian army has been pumping large volumes of Mediterranean Sea waters since Sept. 17 into the buffer zone that it began building two years ago, along 14 kilometers of the Palestinian-Egyptian border. The move is the latest attempt to destroy the tunnels dug by Palestinians under the city of Rafah over the years of the Israeli blockade.

The operation is causing concern for the Rafah border area inhabitants, who say that it will affect their lives there. Farmer Nayef Abu Shallouf, who owns three acres of land less than 300 meters from the Egyptian border, said all the salt water will leave his land briny and destroy his crops. He told Al-Monitor, “In addition to damaging the soil, sinkholes will appear wherever tunnels were dug, with collapses occurring sooner or later.”

Nasser Abdullah in Rafah’s al-Salam neighborhood, also close to the Egyptian border, expressed deep concerns about sinkholes that could open at any time under his home, 500 meters from the border. He explained to Al-Monitor, “The tunnels run under our homes. Water flooding these tunnels will lead to their collapse and the destruction of our homes. Their foundations will be gradually degraded by salt water, even if they remained standing.”

Abdel Majid Nassar, a professor of environmental engineering at the Islamic University of Gaza, stated that the whole area will be transformed into marshland as the soil becomes saturated with water and liquefied, with the water seeping into subterranean aquifers.

He explained to Al-Monitor, “Afterward, collapses will occur, similar to the ones that we began feeling today, particularly considering that Rafah’s underground is crisscrossed with large numbers of tunnels that extend for great distances under the city. As a result, the coming days will bring sudden landslides throughout large swaths of land due to the destabilization of the area’s topsoil.”

Nassar said that the foundations of homes close to the border will surely be affected, with those houses suffering damage and falling apart. He also explained that the pumping of seawater will have disastrous effects on Rafah’s agriculture and aquifers, saying, “The water will also seep toward the surface and result in the salinification of topsoil, destroying agriculture there for years. Furthermore, as the topsoil liquefies, salt water will seep into the upper layers of underground aquifers, used by local inhabitants for irrigation and in homes.”

He pointed out that even if the Egyptian army stops pumping seawater in the coming months, removing salt from the topsoil and fixing the ensuing damage would take years and large amounts of fresh water.

The seawater flooding will also have ruinous effects on the Palestinian economy, particularly in the city of Rafah, by damaging local crops.

Economic analyst Moein Rajab told Al-Monitor that the pumping of salt water into the tunnels will affect agriculture and render farmlands unproductive as salt levels rise. As such, large tracts of Palestinian agricultural land that stretches along the Egyptian border will be made useless, leading to a marked decrease in agricultural production.

Rajab added that soon after, the area’s inhabitants would be forced to leave as the topsoil is destabilized, further exacerbating the current Gaza Strip housing crisis. He explained, “Due to the fact that houses are so close to the border — mere hundreds of meters away — homes will become threatened with demolition or damaged to the point of being unlivable, with their foundations buckling as the earth liquefies. As a result, inhabitants will be forced to abandon their homes, which will add problems and further exacerbate the housing crisis engendered by the scarcity of building materials, blockade and pitiable economic situation.”

It seems that Egypt's unilateral move to destroy the tunnels has already had deleterious environmental and economic repercussions for the Gaza Strip no matter how long it goes on.