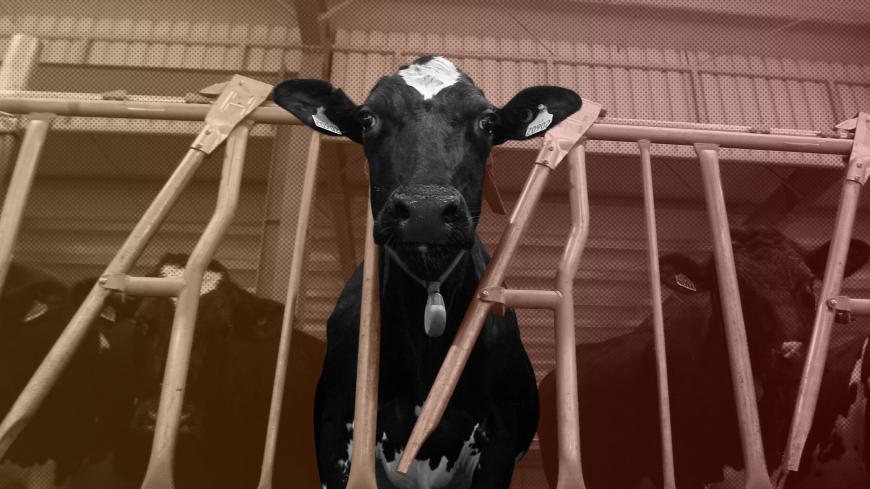 Qatar's leading news outlets recently reported that local agricultural production has jumped by 400% since a political and economic blockade was imposed on the emirate by its Arab neighbors in 2017.

And within a few years, 40% to 50% of fresh products could be produced locally, Faleh bin Nasser Al Thani, assistant undersecretary for agriculture and fisheries at the Ministry of Municipality and Environment, told Al-Monitor.

It is widely acknowledged that the country's staggering efforts to strengthen its farming industry is one of the political responses to the blockade. Thani said the blockade caused Qatar to realize its vulnerability when it comes to the food supply.

However, the Gulf state faces major obstacles in this regard. For example, it was recently ranked as the most water-stressed country in the world. It is also one of the few countries with no permanent rivers as rainfall is extremely unpredictable and highly erratic.

Thus, Qatar’s fast-growing agriculture has been looking deep underground for its water.

Each year, 92% of the 250 million cubic meters (75,000 acre-feet) of groundwater withdrawn from the country's aquifers is given free of charge to farmers. The usage of this water could be far more efficient and effective.

Governmental water statistics show that Qatar withdraws nearly four times as much water from its aquifers than is replenished by rainfall each year. Artificial recharges and irrigation return flows reduce this loss but also may be polluting the aquifers, in part because of chemical fertilizers used by farmers. Furthermore, groundwater depletion causes seawater intrusion into aquifers: In 2014, 69% of wells in Qatar were classified as moderately saline, making their waters harmful to sensitive crops.

This situation raised the eyebrows of Alain Gachet, a top world expert on aquifers. “This approach may satisfy politicians in the short term, but affects the population in the long term,” he told Al-Monitor.

Qatar’s minister of energy and industry, Mohammad bin Saleh Al Sadan, has acknowledged the rapid groundwater depletion to be a "serious challenge," the Peninsula newspaper reported.

The Qatar Environment and Energy Research Institute says about 70% of groundwater extraction takes place in northern Qatar, where wells penetrate the Rus formation.

Half of the groundwater allocated to agriculture is utilized to grow fodder that feeds 60% to 70% of the 1.6 million head of livestock in Qatar.

At Baladna, Qatar's largest producer of fresh dairy products, 12,000 cows produce 400 tons of fresh milk and and other dairy goods a day. The company’s press officer, Saba Mohammed Nasser Al Fadala, acknowledges that "cows were not made for the desert." But Fadala told Al-Monitor that just as Napoleon once said that the word "impossible" is not French, "We say, 'Impossible is not Qatari.'”

While Fadala said Baladna's fodder is imported, Thani said such imports may not last long. “Soon, local production will cover 100% of our need in fodder; I am counting Baladna in this number,” he said.

To mitigate the depletion of Qatar’s aquifers, local authorities plan to ban the use of groundwater to grow fodder by 2025 and restrict it to vegetable crops. Treated sewage water that is currently allocated to the irrigation of green spaces, deep injection into aquifers and agriculture is to be used for fodder.

Gachet likens an aquifer to a bank account, saying, “If you consume the fixed capital, soon or later you will go bankrupt.” Indeed, the only source of groundwater for Qatar is the Umm er Radhuma-Dammam Aquifer System, which includes the Rus. Freshwater reserves for Qatar are estimated at 2.5 billion cubic meters. However, an annual groundwater deficit of some 100 million cubic meters or more puts Qatar's future in a precarious situation.

The UN-led Inventory of Shared Water Resources in Western Asia acknowledged the Rus formations to be "at risk of total depletion." Gachet said, “What Qatar is doing could turn out to be pretty dangerous.”

In the dairy barns of Baladna, all the cows are Holstein Friesians. “They are known to be the best producer of milk,” Fadala said.

But agricultural consultant John Dore, the former chief executive officer of Baladna, told Al-Monitor that Holsteins may "not be the best cows to withstand the Qatari environment." Indeed, each Baladna cow requires an average of 700 liters of water a day, most of which is used for misting in Qatar's heat. The press officer said up to 80% of this water can be recycled.

Dore said one way to mitigate environmental constraints is to use a different breed of cow. He said Qatar could look into using the Girolando, a breed created in Brazil that is resistant to hot temperatures.

But Fadala said this does not align with the vision of Baladna’s founders, which could be summarized as having "la creme de la creme," the best of everything.

Gachet warned, “If Qatar wants to be self-sufficient for food security reasons, they better change their farming techniques and use the latest technologies.”

In the arid lands bordering the city of Al Khor, in northern Qatar, the farm operator Agrico follows his advice to the letter. Indeed, the company has heavily invested in state-of-the-art hydroponic facilities that fit Qatar’s climate and reportedly use up to 90% less water than traditional farming activities.

“We have to be environmentally friendly, we have to be sustainable. Unfortunately, many of the farms in Qatar are still pumping out water and just flood their fields,” Managing Director Nasser Ahmed Al Khalaf told Al-Monitor.

To encourage Qatar’s 916 active farms to follow suit, Agrico develops agricultural facilties for investors willing to engage in sustainable food production. The company has already set up 130,000 square meters (1.4 million square feet) of greenhouses in the country for six clients and 500,000 other square meters are under discussion.

The Ministry of Municipality and Environment says it supports those who reduce their groundwater consumption and move toward hydroponic farming. A budget of $2.75 million to $3.3 million has been allocated to a program that aims to provide up to 140 farms with free greenhouses.

Miles away, it is time for celebration at Baladna as the first international exports have begun, going to Yemen, Oman and Afghanistan. However, this could cause a conflict; Thani said Qatar's groundwater supply is more important than exports. “For the moment, we keep silent, but not for a long time,” he warned.

Khalaf said Qataris' environmental awareness must improve. “We still use a lot of plastic bags," he said. He added, "For people to understand that one vegetable consumes less water than another" is still a distant reality in Qatar.