Fans and foes of the deal are already battling over the day after. 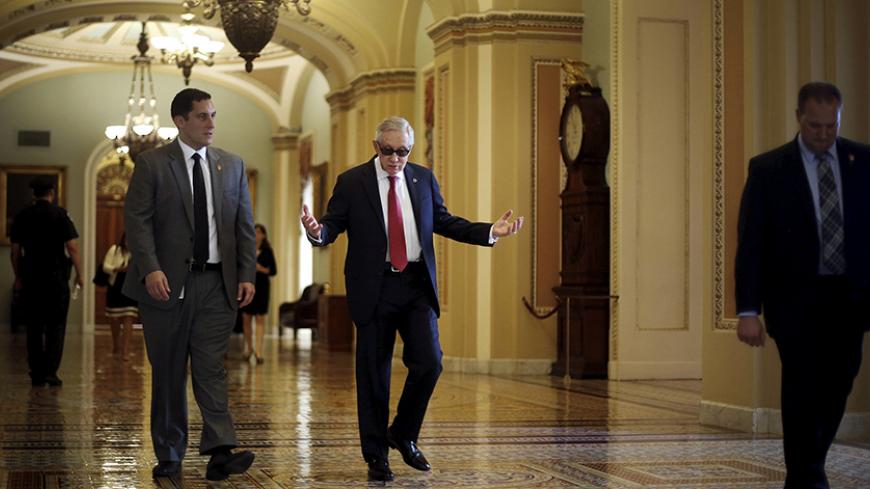 US Senate Minority Leader Harry Reid , D-Nev., walks to his office as he arrives at the US Capitol in Washington, Sept. 8, 2015. Reid issued a ringing defense of the Iran nuclear deal, saying the agreement would survive the high-stakes review by Congress. - REUTERS/Jonathan Ernst

Before the US Congress even gets a chance to vote on the Iran nuclear deal, its critics and defenders are already battling over how it will be implemented.

The agreement's survival was cemented Sept. 8 when three more Democratic senators announced their support, bringing the total to 41, enough to uphold President Barack Obama's veto of congressional attempts to kill it and perhaps to prevent a resolution of disapproval from coming to a vote at all. Only one senator, Maria Cantwell, D-Wash., remains in play.

As a result, debate has already shifted to congressional oversight of the deal.

The top Democrat on the Senate Foreign Relations Committee, Sen. Ben Cardin, D-Md., hit the ground running late last week with a draft bill laying out a role for Congress in reviewing the agreement's implementation and beefing up support for Israel. Al-Monitor obtained a 35-page "discussion draft" of the bill, which was first reported over the weekend by the liberal foreign policy blog LobeLog.

"Regardless of whether Congress rejects the [Iran deal], discomfort with aspects of the agreement remains across the ideological spectrum," Cardin, one of four Democratic senators who opposes the deal, wrote in a Washington Post op-ed Sept. 4. "That is why I will introduce legislation backed by supporters and opponents of the deal designed to strengthen the Iran Nuclear Agreement Review Act and US regional security strategy. This would be consistent with the administration’s interpretation of the agreement and complement its regional security commitments."

"The draft that I've seen is quite problematic," Colin Kahl, a deputy assistant to Obama and national security adviser to Vice President Joe Biden, said at an Arms Control Association event at the Carnegie Endowment for International Peace. "It has a number of very problematic interpretations about the actual terms of the [Iran deal], which are just at odds with the explicit language [of the deal]. It has some things on the sanctions front that I think the P5+1 and Iran might see as inconsistent with some of the obligations under the [deal]. And at the very least, it has a number of provisions in it that are quite provocative and not necessarily so at a time when what we should all be focused on … is how to effectively implement this deal."

Cardin's bill, the "Iran Policy Oversight Act of 2015," contains several provisions that have alarmed the deal's proponents. These include:

On the other hand, the Cardin draft also calls for full funding of the International Atomic Energy Agency, which is seeking $10.6 million per year from the international community to implement the deal. The bill also calls for the creation of a special coordinator for implementation of the agreement.

The deal's backers immediately set out to undercut key sections of the proposal before they have time to gain any traction in Congress.

As early as Sept. 4, the pro-deal Arms Control Association shared a memo with Senate staffers outlying its concerns, sources outside the organization told Al-Monitor. The group followed up with a briefing Sept. 8 at the Carnegie Center, which was preceded by appearances by Kahl and Senate Minority Leader Harry Reid, D-Nev.

"A rush to consider legislation that increases support for Israel in this way and seeks to renegotiate terms of the deal could actually erode implementation rather than strengthen the deal," Kelsey Davenport, director for nonproliferation policy at the Arms Control Association, told the think-tank audience.

She noted in particular that the nuclear agreement does not prohibit Iran from creating highly enriched uranium after year 15 of the deal. And she said that expecting Iran to agree to reveal the inspections regime for its military sites — the "secret side deals" that Republican critics have objected to — was unrealistic.

As for the Massive Ordnance Penetrators — the 30,000-pound bunker-busting bombs — she said sharing the B-2 or B-52 bombers needed to carry them could violate arms reduction agreements with Russia.

Other pro-deal organizations also lost no time weighing in.

"Bottom line: The Cardin bill is a complex 35-page compendium of provisions that should be thoroughly vetted in the Senate Foreign Relations Committee rather than tossed on the Senate floor with little chance to study it," the left-leaning Council for a Livable World wrote in an analysis of the draft bill. "Passage of the bill could easily lead to charges of bad faith and jeopardize the painstakingly negotiated compromises. The US Congress would be justified to react with outrage if the Iranian parliament tried to renegotiate through legislation."

Reid vowed to work with lawmakers across the aisle on the next steps but stopped short of endorsing the Cardin proposal.

"I've … closely reviewed the legislation that Senator Cardin is proposing, which will provide additional security assistance and assurances to Israel," Reid said the morning of Sept. 8. "I plan to work with the White House and with both Democrats and Republicans to guarantee that the United States is doing everything possible to protect the safety and security of Israel."

by Murielle KASPRZAK and Joseph SCHMID | AFP | May 26, 2022
END_OF_DOCUMENT_TOKEN_TO_BE_REPLACED