Some in Congress are keen to share the latest bunker-busting technology, but Israel is skeptical. 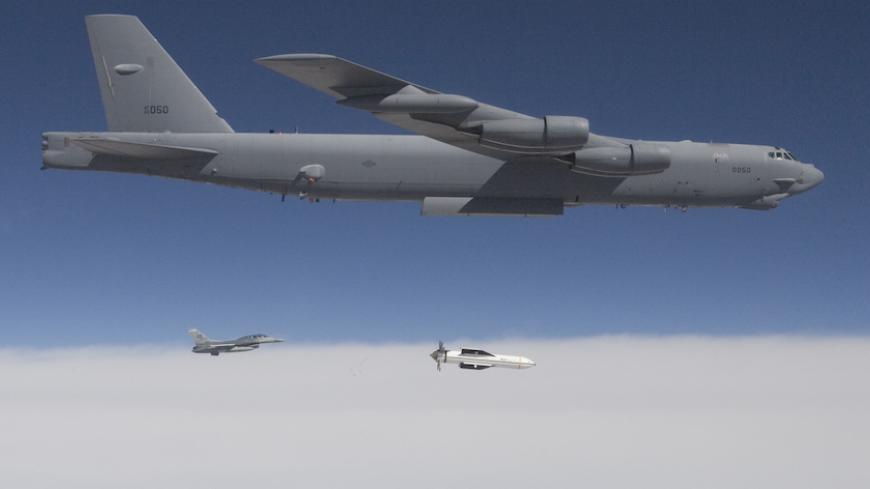 A B-52 releases a test version of the Massive Ordnance Penetrator during a test of the weapon over the White Sands Missile Range in New Mexico in 2009. - US Department of Defense

Talk is heating up in Congress and the Pentagon about whether to share America’s massive new bunker-busting bomb as a warning to Iran, but Israel remains cool to the idea.

The proposal is expected to come up during next month’s visit to Washington by Defense Minister Moshe Ya’alon as well as Prime Minister Benjamin Netanyahu’s Nov. 9 meeting at the White House. Interviews with current and former top-ranking Israeli military officials, however, suggest a distinct lack of enthusiasm for a cumbersome super-weapon of dubious military value.

“This idea is irrelevant for Israel,” a senior Israeli officer told Al-Monitor. “It is way beyond our means [and] not worth the means, money and effort. We are not capable of maintaining and sustaining it.”

They point out that Israel does not possess the heavy bombers — B-2s or B-52s — required to deliver the 15-ton Massive Ordnance Penetrator, or GBU-57. And they say only one air base, Nevatim, has runways that could conceivably be upgraded to handle such flights.

Israeli experts also warn that the tiny country would have to invest a fortune in related infrastructure — simulators, training, facilities, mechanical systems and experts — to handle such weapons. They argue that Israel came close to buying a dozen V-22 Osprey tilt-rotor troop transports last year before putting the $800 million deal on ice after weighing all the associated costs.

Instead, Israel is believed to be focused on acquiring one more squadron of F-15 and F-35 fighter jets, Tomahawk cruise missiles and a bump in annual US military aid from $3 billion to $5 billion as part of upcoming negotiations over a new 10-year Memorandum of Understanding when the current one expires in 2017.

Despite those reservations, the Israeli air force is not expected to pass up out-of-hand the chance to get its hands on powerful new toys. Others say they like the political message that would be sent if the United States demonstrated that it was conserving its military options against Iran in deeds rather than words.

And at least one former Israeli Defense Forces chief of staff likes the idea.

The former top military official told Al-Monitor that the delivery of the massive bombs — and the US aircraft to fly them — would mean an actual US military presence in Israel, sending a strong signal not only to Tehran but to the Russians as well as they increase their military presence in Syria. With US assistance, the former official said, there’s no reason why Israel couldn’t build the necessary infrastructure for the weapons.

The idea of sharing the bunker-busters with Israel has been bandied about for the past several years, ever since the Pentagon declared them ready for action two years ago. The bombs are seen as a logical addition to the Israeli arsenal because of their alleged ability to destroy Iran’s most heavily fortified nuclear site at Fordow — the very mission for which they were designed.

The idea has gained traction since the signing of the international nuclear deal with Iran as a high-visibility way to deter Tehran from racing toward industrial-scale enrichment once much of the agreement’s restrictions are lifted in 15 years. Dennis Ross, President Barack Obama’s former Middle East adviser, in particular has been pushing the idea in meetings with Israeli and US officials.

“In my mind it was a way to make a statement that when we say we're not going to allow them to become a nuclear-weapons state, we mean it,” Ross told Al-Monitor. “And when we talk about some kind of firewall between threshold and nuclear status, we mean it not only in terms of our words but we're underpinning our words with an action that makes it clear these words should be taken deadly seriously.”

Ross said he’s found a receptive audience on Capitol Hill, notably among Democrats who don’t like that many of the restrictions on Iran would eventually expire but are eager to try to make the deal work.

"I think there's more interest there,” Ross said. “And not surprisingly. For those who have come out in favor of the [deal] but are concerned about some of its vulnerabilities, it's not surprising that they tend to be more enthusiastic about this."

One of those interlocutors in the top Democrat on the Senate Foreign Relations panel, Sen. Ben Cardin, D-Md. An early draft of Iran-related legislation currently being worked on by Cardin would authorize the president to provide the massive bombs to Israel “and the means to deploy them.”

A Cardin spokeswoman however cautioned that the bill is still being modified.

“Senator Cardin believes it is premature to be talking about specific weapon systems that may be part of an enhanced regional security strategy,” said Sue Walitsky. “His proposal, as it will be introduced, allows more flexibility on what might be appropriate as the situation on the ground develops.”

Critics of the deal say Democrats are just looking for cover wherever they can find it. They argue the bunker-buster idea is meant to make the nuclear agreement more palatable but is not realistic.

“There's no evidence that the US is going to deliver bunker busters. If they delivered them, there's no evidence the Israelis could use them. If the Israelis could use them, there's no evidence that they would want to, given other logistical constraints,” said a senior official at a pro-Israel organization opposed to the Iran deal. “It's a simple cost-benefit analysis. The Israelis, to say nothing of the Americans, can already eliminate most of Iran's nuclear infrastructure, since with only two exceptions it's all above ground. The Israelis may not want to drag bunker busters across the entire Middle East for just another two facilities.”

Ross said he’s also talked to officials at the State and Defense departments, where the reception has been mixed.

“Within the Pentagon, some of the reaction I've had has actually been more favorable,” Ross said. “At the State Department I've had some reactions that were less favorable; I've had one person say to me, 'We don't contract out our foreign policy.'”

“I think there's an actual debate within the administration over the efficacy of this,” he added. “There hasn't been a reluctance to talk to me about it."

A Pentagon spokesman declined to elaborate.

“We are ready to discuss a full range of capabilities with our Israeli partners in the context of our ongoing and unprecedented military cooperation,” said Maj. Roger Cabiness, “but we will not discuss those capabilities publicly.”

Critics in the arms control community, meanwhile, have raised concerns that providing the strategic bombers necessary to carry the massive bombs to Israel could violate America’s New START treaty with Russia. Ross told Al-Monitor there are probably ways around those restrictions.

“You'd have to look at what might be done to avoid it being inconsistent with [New START]. If we retain ownership of it if it becomes a lease or a loan? If it's not carrying nuclear weapons but it carries conventional weapons? I think there are ways to deal with that issue."

Ben Caspit contributed to this story from Israel

Editor's Note: This story was updated on Sept. 22 with comment from Senator Ben Cardin’s staff.